Hundreds of students demand President Obama reject the Keystone XL pipeline deal, but Obama has already fast tracked the southern half of the pipeline which is currently delivering Canadian tar sands to Texas refineries

Hundreds of students demand President Obama reject the Keystone XL pipeline deal, but Obama has already fast tracked the southern half of the pipeline which is currently delivering Canadian tar sands to Texas refineries 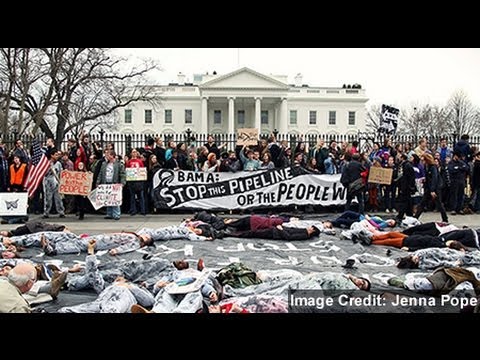 JESSICA DESVARIEUX, TRNN PRODUCER: This was the scene on Sunday, March 2, in front of the White House. Two hundred and fifty people handcuffed themselves to the gate and were later arrested while protesting the Keystone XL Pipeline. Protesters say that they were there to send President Obama a message.

JAMIE DEMARCO, KEYSTONE XL PROTESTOR: President Obama, the Keystone Pipeline is not in our national interest. We have to move forward to clean energy, not tie ourselves to ancient fossil fuels. There’s a better way, and there’s a better way for the United States.

DESVARIEUX: The protest started here on Georgetown’s campus. It’s where just a year ago President Obama laid his plan on how he would evaluate the Keystone Pipeline. Since pipeline crosses an international border, President Obama will have the final say.

BARACK OBAMA, U.S. PRESIDENT: Allowing the Keystone pipeline to be built requires a finding that doing so would be in our nation’s interest. And our national interest will be served only if this project does not significantly exacerbate the problem of carbon pollution.

DESVARIEUX: Exacerbating the problem of carbon pollution is exactly what these protestors argue will happen if the entire Keystone Pipeline project is approved.

A report released by Oil Change International found that the 830,000 barrels of crude oil produced daily from the Keystone XL Pipeline will have a significant impact on the environment.

We spoke with the executive director of Oil Change International, Stephen Kretzmann, to find out how they reached their conclusion.

STEPHEN KRETZMANN, EXEC. DIR., OIL CHANGE INTERNATIONAL: We got all these figures for how to convert that into carbon equivalent, and we multiplied it by the 830,000 barrels, and we came out with that equals 181 million metric tons annually of carbon dioxide. And that equates to 51 coal plants or 37 million cars, which is a not-small number of cars. Right? That’s more cars than are currently registered in California and New York and Florida combined.

DESVARIEUX: But according to the State Department’s recently released environmental assessment of the pipeline, the construction of the pipeline would be the equivalent of anywhere between half a coal-fired power plant to half a dozen. A drast difference from OSI’s reported 51 coal plants.

But the State Department’s analysis of the project is not without controversy, with critics questioning the report’s credibility, since it was conducted by Environmental Resource Management, a consultant recommended by he company behind the pipeline, TransCanada.

DAPHNE WYSHAM, CODIRECTOR, SUSTAINABLE ENERGY AND ECONOMY NETWORK: The fact that they were called in and asked to provide the environmental impact assessment for the State Department suggests that the conflict of interest guidelines were not–they claim they were met and that the State Department actually did carry out a review. But it’s clear that there is evidence that ERM is essentially beholden to Keystone XL. And so there’s no question that the analysis is biased in favor of their client.

DESVARIEUX: On February 26, the State Department’s inspector general said that that its own review found no conflict of interest.

The Real News reached out to TransCanada to get their comment on the controversy over the State Department’s assessment. They sent us this statement. Quote,

“This is the second time groups opposed to the project have gone to the well with conflict of interest allegations and, once again, they have proven to be false. TransCanada remains focused on the National Interest Determination process for Keystone XL and the facts about our project speak for themselves.”

But the facts are what Democratic representative Raul Grijalva want to be investigated. Last week, he asked the Government Accountability Office to investigate the State Department’s environmental review process of Keystone XL. Other members of Congress are also making sure the review process of Keystone is as thorough as possible. Democratic senators Barbara Boxer and Sheldon Whitehouse sent a letter to the State Department asking them to analyze the public health risks of the pipeline. This is in light of a new study by the Alberta Cancer Board, which revealed that the cancer rate is 30 percent higher in in Fort Chipewyan, which is located downstream from a major tar sands extraction site in Alberta, Canada. The doctor serving the First Nations community was present at the Capitol Hill press conference.

DR. JOHN O’CONNOR, FAMILY PHYSICIAN: –a sizeable number of carcinogens that get into the food chain, into the water, into the air. These toxins have been linked with cancers and the types of cancer that occur in Fort Chip. This represents a public health crisis in this community.

DESVARIEUX: But despite these calls for investigations and attempts to stall the pipeline, like in this video, where you can see people chaining themselves to machinery,–

–the Keystone XL Pipeline’s basic function, which is to transport tar sands from Canada to the Gulf Coast, is already in full swing. The southern half of Keystone XL was completed early this year. That’s because in March 2012, President Obama signed an executive order to fast-track the building of the southern leg, and now it will be able to transport up to 700,000 barrels of crude a day.

STEVE HORN, INDEPENDENT JOURNALIST, DESMOG BLOG: Right now it’s open for business, and TransCanada’s very excited about it. And, unfortunately, I think the environmental community doesn’t understand that one half of the pipeline already exists and it’s already very crucial and it’s going to have a huge climate-change impact, ecological impact, etc.

DESVARIEUX: Steve Horn is an independent journalist who has been following Keystone’s development and says it’s important to follow what oil industry investors are saying about the Keystone northern half to understand the industry’s position.

HORN: There’s been two important reports written about the Keystone XL northern half by banks, by big banks, by Canaccord Genuity in Canada and another one by National Bank in Canada. Both of these reports, which came–one came out in fall last year, 2013; one of them just came out this year–both reports conclude that the northern half of the Keystone XL Pipeline is not quite as important for investors as it’s kind of been played out in the public theater, in the public sphere. The northern half of the pipeline’s key, but that they do map out there are many ways oil is currently getting to Cushing and many more proposals to get it to Cushing down to the Gulf Coast. And so it’s silly from an investor point of view to think that you have to put all your eggs in that one basket. And so I think these two reports are key for, you know, activists to read.

DESVARIEUX: We asked protestors at the rally their thoughts on the northern leg of the pipeline now that Canadian tar sands can reach the Gulf Coast.

DESVARIEUX: Do you think it is as critical, the northern leg?

COLE NORGAARDEN, STUDENT PROTESTOR: I do think–I think it’s equally as critical. I don’t think we can let the fact that half of it has already been built stop us or make us think for one moment that it’s not–this fight is no longer worth it, because there are people on the ground who are willing and are going to stop this pipeline.

DESVARIEUX: Some critics of the Keystone XL protest argue that stopping the northern leg of the pipeline is a decoy and

the real issue should be to focus on the entire transport system of tar sands to the United States, whether that be by rail or through existing pipelines.

But OSI executive director Steve Kretzmann says that a large part of the battle is about slowing down the industry so policymakers can get on board with fighting climate change not just with their rhetoric but with their policy.

KRETZMANN: These two things are fundamentally in conflict. And I actually think an all-of-the-above energy strategy is essentially climate denial by another name. But it’s going to take a little while for our movement to make that point.

Power comes from two places, money and people. We are not going to end up with more money than the fossil fuel industry. But we clearly have more people.

DESVARIEUX: There are certainly more people in the streets against Keystone. But the question remains if President Obama will listen and take the first step towards a more comprehensive approach to fighting climate change.