Appointing a Justice: Do Partisan Politics Matter More Than Merits? 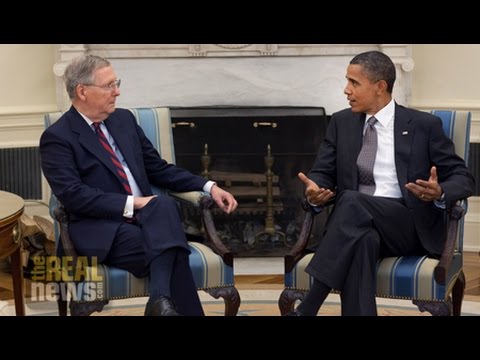 JESSICA DESVARIEUX, PRODUCER, TRNN: Welcome to the Real Capitol Hill. I’m your host, Jessica Desvarieux, coming to you from the Russell Rotunda.

After the death of Justice Antonin Scalia many are questioning what this will mean for the court this year and in the future. The court is now split evenly between conservative and more liberal justices, and Republicans are claiming that it should stay that way until there’s a new president in office.

MITCH MCCONNELL: Whoever the nominee is that comes up next year will be considered by the Senate.

DESVARIEUX: But President Obama has countered that claim, saying he will perform his constitutional duty and nominate a successor to Scalia.

BARACK OBAMA: If in fact the Republicans in the Senate take a posture that defies the Constitution, defies logic, is not supported by tradition, simply because of politics, then, invariably, what you’re going to see is a further deterioration in the ability of any president to make any judicial appointments.

DESVARIEUX: Now joining us to go behind this political theater and give us the real story is Erwin Chemerinsky. He is the law school dean at the University of California Irvine, and he is also the author of the book “The Case Against the Supreme Court.” Thank you so much for joining us, Erwin.

ERWIN CHEMERINSKY: It’s my pleasure to be with you.

DESVARIEUX: So, Erwin, actually one-third of US presidents have appointed justices during an election year. IS there any basis for Republicans to challenge President Obama from bringing forth a nominee?

CHEMERINKSY: No, in the sense that the Constitution says that the president shall appoint Supreme Court judges with the advice and consent of the Senate. It is an obligatory duty of the president to appoint, and concomitantly an obligatory duty of the Senate to give advice and consent. But, that said, I don’t know of any way to force the Senate to hold hearings or to take a vote if they choose not to do so.

CHEMERINSKY: I’ve argued that it would be desirable to go to a merit selection system for Supreme Court justices. A president, even President Obama now, could create a nominating commission, he could get it to be evenly Republicans and Democrats, and he could say, “Give me three names. I only want names that two-thirds of you agree upon, and I promise I’ll either choose one of those names or ask you for additional names.” So this is a way in which the vetting process, the consideration of names would occur through a merit selection process.

I also think that there needs to be a reform of the confirmation process, that the Senate Judiciary Committee should have a series of questions that any nominee would have to answer in order to be considered. I think that the ideal would be at a time when there’s not a vacancy, perhaps before the next election, for the Democrats and the Republicans to agree to such a list of questions.

CHEMERINSKY: On the one hand we will never come up with an agreed-upon set of criteria for assessing merit. On the other hand, I think we can generally agree on things we look at in evaluating nominees for the Supreme Court in terms of merit. There’s a reason that Harriet Miers’ confirmation, nomination, didn’t go forward and Samuel Alito’s did. There’s certainly been other instances in history where nominees were blocked because they weren’t considered qualified. I think if you create a large enough committee, a diverse enough committee, all the various views of what’s merit would be presented, and ultimately they could agree upon a few nominees of the highest quality.

DESVARIEUX: Erwin, in the United States we’re led to believe that the Supreme Court is completely independent, and these justices almost act like independent referees, umpires, per se, calling the balls and strikes, like Justice Sotomayor and Justice Roberts said in their confirmation hearings, but you argue that there is ideology behind their decisions, and they are most [of] the time invested in representing the interests of the elite. How does the Roberts court, for example, do just that?

The other of what you say, this notion that Supreme Court justices are like umpires, is nonsense. John Roberts said this in his confirmation hearings in 2005. At her confirmation hearings Sonya Sotomayor in 2009 said justices apply the law, they don’t make the law. John Roberts and Sonya Sotomayor should be ashamed of themselves for giving such a misleading impression of judging to the American people. Especially what the Supreme Court is doing inevitably requires value choices to be made.

The Constitution is written in very broad language. What’s cruel and unusual punishment? What does due process of law require? Also inevitably, constitutional cases involve balancing of competing interests. The court has to decide whether there’s a compelling government interest. Whether the government interest is legitimate, or, say, in the context of search and arrest, whether the police were acting reasonably. There’s no way to balance. There’s no way to decide what’s a compelling or a legitimate interest. There’s no way to determine what’s reasonable, other than the value of the justices, and that’s why who the justices are, their life experience, their ideology matters so much.

DESVARIEUX: How about keeping elite interests? How does the Roberts court actually do that?

CHEMERINSKY: The Roberts court, for example, in Citizens United v. Federal Elections Commission held that corporations can spend unlimited amounts of money from their corporate treasuries to get candidates elected or to get candidates defeated. It’s the Roberts court that, for example, has time and again ruled in favor of business and against consumers and employees. One illustration of that, is that the Roberts court has been very aggressive in enforcing arbitration clauses and routine contracts. These are clauses that say that a person can’t go to court. They have to go to arbitration. This is something business really favors, and the Supreme Court has said that these are to be enforced, even if it means, realistically, there will be not claims against the company.

The Roberts court has also very much protected corporations from class action suits. It is a very pro-business court, and in that way favoring the elites over the rest of us.

DESVARIEUX: When we talk about arbitration, I just want folks to understand it here, we’re talking about a system that is placed outside our public court system. Essentially, you have a lawyer that is paid by both parties who is known as an arbiter, and he or she will settle those disputes. Erwin, how is that sort of system not in the interests of everyday people?

DESVARIEUX: All right, Erwin, let’s pause the conversation here, and in the next part I’d like to discuss with you the history of the court and how, as you argue, it’s been known to be the decider for elite interests. Thank you so much for joining us.

CHEMERINSKY: Thank you for having me. It’s really a pleasure.

DESVARIEUX: And thank you for joining us on the Real Capitol Hill.