Sanders says 13 million jobs could be created if Congress taxed the wealthy and corporate tax havens, but taxing the wealthy is a non-starter for Republicans

Sanders says 13 million jobs could be created if Congress taxed the wealthy and corporate tax havens, but taxing the wealthy is a non-starter for Republicans 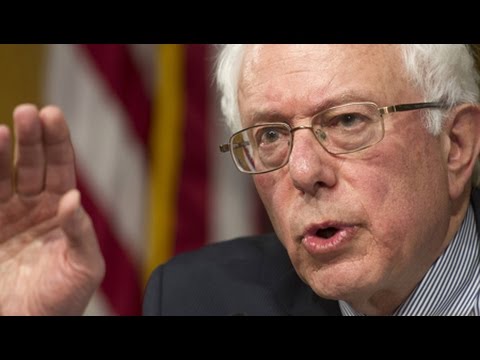 JESSICA DESVARIEUX, TRNN PRODUCER: America’s roads and bridges need a makeover. That’s according to the American Society of Civil Engineers, which gave the U.S. a D-plus for its current infrastructure.

In Washington, Vermont Sen. Bernie Sanders is trying to do something about it.

BERNIE SANDERS, U.S. SENATOR (I-VT): And what I could tell you: if you turn your back on infrastructure and you don’t invest, do you know what happens? It gets worse. It doesn’t get better all by itself.

DESVARIEUX: To make infrastructure better, Sanders introduced the Rebuild America Act. The bill would invest $1 trillion over five years and provide 13 million living wage jobs, an issue he says should get support no matter where you stand on the political spectrum.

SANDERS: So what we hope to do–and I’m so pleased that we have different organizations here–is to kind of rally the American people to have the Congress do what they know needs to be done. Now, where the debate will take place, how big should it be, yeah, this is pretty big, but I think America should lead. We should have big ideas. We should put millions of people back to work. Other people may want to be doing this thing in a smaller way. How do you pay for it? That’s going to be a real debate.

DESVARIEUX: The debate on funding infrastructure is already taking shape. Last week in a 60 Minutes interview, Senate majority leader Republican Mitch McConnell and Speaker of the House John Boehner said they would support a plan to revitalize infrastructure. But raising taxes on the wealthy would not be a way to pay for it.

INTERVIEWER: From the president’s State of Union address let me ask you: dead or alive, raise taxes on the wealthy?

MITCH MCCONNELL, U.S. SENATOR (R-KY): Why would we want to raise taxes on people?

INTERVIEWER: I’ll take that as a dead.

DESVARIEUX: Dead may be the fate of the bill if it follows its predecessors. In the two previous congresses, when Democrats controlled the Senate, two iterations of this Rebuild America Act never passed. The 2011 version never made it past the filibuster. The vote was 51-49, with all Republicans and two members of the Democratic Caucus–Joe Lieberman of Connecticut and Ben Nelson of Nebraska–voting no.

This bill was on a much smaller scale than Sanders’s bill and called for only $50 billion in spending, which would have been paid for with a 0.7 percent increase on incomes that exceeded $1 million a year.

With this new bill, Sanders is not including a plan for funding the infrastructure. Sanders says the path to funding is clear to him if it’s in the interests of everyday people.

SANDERS: When you have hedge fund managers in this country paying a lower effective tax rate than firemen or nurses, I think there are progressive ways to raise the money.

DESVARIEUX: Another way to raise money is to look at corporate tax havens that groups like Campaign for America’s Future say are trying to evade taxes.

ISAIAH POOLE, COMM. DIRECTOR, CAMPAIGN FOR AMERICA’S FUTURE: The workaround that seems to be catching fire on Capitol Hill is allowing corporations who have stashed profits overseas to bring those profits back into the country at a sharply reduced tax rate and use some of that money for infrastructure improvements. That is something that we have imposed, because it basically rewards corporations for evading taxes.

DESVARIEUX: Staying engaged and demanding change–these are two things Senator Sanders say are essential to making this bill a reality.

SANDERS: This is not a debate about the severity of the problem. Everybody knows it. You cannot continue to push it under the rug. Infrastructure will only get worse. It will become more expensive. We’ll waste more money. The American people have got to demand that their members of Congress act and act now.