After pushing disastrous policies and wars, prominent neoconservatives are reinventing themselves as members of the anti-Trump "resistance" with the help of top Democrats and MSNBC, says The Nation's James Carden

After pushing disastrous policies and wars, prominent neoconservatives are reinventing themselves as members of the anti-Trump "resistance" with the help of top Democrats and MSNBC, says The Nation's James Carden 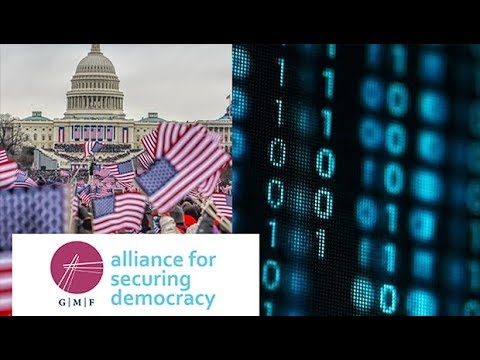 After the Iraq War, the neocons behind it were widely discredited. That’s part of why Donald Trump was able to win over voters by appeal to those angry about U.S. involvement in costly overseas wars. But since Trump’s victory, many neocons have rallied to his side as he pursues their agenda, especially in places like Iran.

Others though have found a different place to land, in the so-called Resistance. These Resistance neocons have found common cause with Democrats who want to go after Trump mainly on the issue of Russia. The result is hawks like David Frum or Max Boot now appearing regularly on liberal network MSNBC.

And a bipartisan, new organization has just been formed called The Alliance for Securing Democracy. It’s composed of top officials who served under both Republicans and Democrats. Its mission includes a vow to “publicly document and expose Vladimir Putin’s ongoing efforts to subvert democracy in the U.S. and Europe.”

James Carden is a contributing writer at The Nation, and executive editor for The American Committee for East-West Accord. He has a new piece up on ConsortiumNews.com called “Neocons Enlist in the Anti-Trump Resistance.” Welcome, James.

James Carden: Thanks a lot.

Aaron Maté: So your piece talks about this new group that I mentioned, The Alliance for Securing Democracy. Can you talk about what that is?

James Carden: Well, it seems to be an alliance between neoconservatives and former Democratic officials who were in the Hillary Clinton camp. One of the worrying things about this so-called alliance is that it is housed at the German Marshall Fund. Now, the German Marshall Fund for many decades was one of the more responsible and reputable think-tanks in Washington, but it seems to have succumbed to the anti-Russian fever. I find that to be a pretty depressing development.

I actually sort of warned against this alliance between neoconservatives and Democrats early in 2016 in a piece for The Nation where I warned that the neoconservatives don’t really have any particular loyalty to any one party and that if Trump becomes the nominee, they’re going to go elsewhere. And I said it would be a real tragedy for the Democratic Party if they opened their doors to the neocons.

And that seems to be exactly what’s happening. The roster of this alliance reads like a who’s who of neoconservative royalty and high ranking Democratic officials. It includes David Kramer, who previously worked at the McCain Institute and has some sort of role with regard to publicizing the notorious “piss dossier.” You have Kramer, you have former Biden advisor …

Aaron Maté: Just to remind people, that’s the dossier that alleged that the Russians had compromising information on Donald Trump, and thus were able to manipulate him.

James Carden: Correct. So Kramer, you know, McCain handed this thing off to the FBI, so he’s kind of involved in that sort of thing. We have Bill Kristol teaming up with President Obama’s top Russian advisor Michael McFaul. So, the alliance is now, thanks to the German Marshall Fund, at least now it’s out in the open.

Aaron Maté: And just to illustrate how bipartisan this alliance is, it’s led by Laura Rosenberger and Jamie Fly. Rosenberger was a top foreign policy advisor to Hillary Clinton on her 2016 campaign. Fly was the top advisor to Senator Marco Rubio, one of the biggest hawks in the Senate.

James Carden: Right. So, you know, here we are. What a strange world we live in now, that the neocons have kind of come back to their party of origin. I think if we look at this sort of historically, the neocons kind of came into being in the late 1960s, and they were mostly Democrats, and they were sort of conservative Democrats that were really turned off by the campus riots in and around 1968. And their initial focus was on domestic issues. So they were people like Daniel Patrick Moynihan, and throughout the ’70s and into the ’80s, they kind of switched focus and became sort of obsessed with the Soviet Union and missile defense issues and things like that.

Sort of the second generation took over in the 1990s and really made the Middle East their core focus. But throughout all that, after Reagan anyway, the neoconservatives were mainly Republican. Now we’re in a situation where they’re reverting back to the Democratic Party and I find that really very troubling.

Aaron Maté: Yeah, and it’s interesting to remember that just a few years ago you didn’t see this huge anti-Russia hysteria, at least from some Democrats that are now being a part of it. When Obama made fun of Mitt Romney at their 2012 campaign debate, when he said the ’80s want their foreign policy back after Romney called Russia the U.S.’s biggest geopolitical threat, everybody backed Obama. The Democrats were behind him. It was ridiculed to be sort of beating the drums of this new cold war. But after Trump wins, it’s just radically changed.

James Carden: Yeah, it shows how opportunistic really all of this is in a way. And I think that the Democrats are really not doing themselves any favors by this sole focus on Russia. I think last week, the DNC and the RNC released their fundraising numbers, and the RNC is outraising the DNC by quite a lot. And the Democratic Party’s popularity is on par with Donald Trump’s popularity. So they’re not really doing themselves any favors. I think that they’re going to sort of assign themselves to electoral irrelevance if they keep this up. And they’ll deserve it.

Aaron Maté: James, is a part of this just the fact that it’s a lucrative hustle to be a hawk, no matter what party you’re in? I mean you worked at the State Department, so you’ve probably seen this up close. You know, groups like this, The Alliance for Securing Democracy, have a lot of money behind them. And so if you’re out there advocating a détente with Russia, deescalating tensions, it’s not very profitable. But it is, if you’re cheerleading for war. Am I right?

James Carden: I can speak to that with some authority because I’m the executive director of The American Committee for East-West Accord, which has for the last couple of years been promoting the idea of détente between the United States and Russia. I can assure you that there’s not a lot of money in that. So, you’re exactly right, it’s a think-tank hustle; that’s where the money is. And that’s where people go. And it’s a deeply cynical enterprise.

Aaron Maté: I’m going to read you a headline from CNBC: “Major Defense Stocks Reach All-Time Highs as Investors See Weapons Spending Boost.” And one of the developments that they cite as being positive for the defense industry is tensions with North Korea and also, they say, “NATO concerns about Russia are seen as a positive for the defense industry, particularly missile defense systems makers such as Lockheed and Raytheon.”

James Carden: Right. Business has been booming. And so that’s another element of this as well. Part of the hysteria is that the Clintonites can’t get over the fact that they lost to Donald Trump. Okay. But the other part of it is, the money part, and it is, it’s very good business for these defense contractors to have a situation where we’re in a, basically, a four-front new world world war with the Russian Federation. It’s a very dangerous situation, but I guess they’re happy as long as they’re making money.

Aaron Maté: So speaking of making money, let’s talk about the media. MSNBC is seeing record high ratings these days. They’ve been the foremost proponent and champion of this “Russiagate” narrative constantly on the airwaves. And they’ve featured people, as I mentioned before, like David Frum and Max Boot. You know, David Frum who wrote the “Axis of Evil” speech. Both of them were huge supporters of the Iraq War.

Now, it’s fascinating to me to contrast that, Dems going on MSNBC, with how they’re being treated by, at least some people, on Fox News. And I want to play for you a clip, James, of Max Boot recently arguing with Tucker Carlson of Fox News on Tucker Carlson’s show.

Tucker Carlson: The moral preening and the generalizations are tiresome. Let me ask you a specific question. You say Iran is a primary- [crosstalk]

Tucker Carlson: I’m immoral because I disagree with you. This is why nobody takes you seriously, but I’m giving you a chance to redeem yourself by answering this question. You say Iran is a primary threat to us.

Max Boot: Tucker, you’re the one that’s not taken seriously.

Tucker Carlson: Tell me how many Americans, in the United States, have been murdered by terrorists backed by Iran since 9/11?

Max Boot: Oh, so you’re taking the pro-Iranian line essentially, is that right? What about the fact that hundreds of American troops-

Aaron Maté: So James, it’s fascinating to me to compare that treatment of Max Boot there on Fox News by Tucker Carlson, to how he’s treated on MSNBC. He now goes on Lawrence O’Donnell’s show at 10 o’clock and he’s treated with reverence and as an expert because he’s opposed, he says, to Donald Trump.

James Carden: Right. They’ll make any excuses for the Never-Trump crowd. Tucker Carlson is exactly right. Max Boot has been wrong about every single foreign policy issue over the last 20 years. All of the people like David Frum, Bill Kristol, their policies have caused immense damage to the national security of the United States. They’ve caused countless deaths in the Middle East. And they are celebrated by the purportedly liberal network. And it’s really quite striking. I think Carlson, for all his faults, deserves a tip of the hat. He is one of the few people that is airing a dissenting view to this Russia hysteria.

Aaron Maté: So James, in terms of where this all goes, Max Blumenthal was recently also on Tucker Carlson’s show. And he said that he thinks that once this Russia hysteria dies down, that’s it’s basically going to be repurposed by the right into attacking the left. So I’m wondering, your concerns, over the long term, about what you think this alliance between Democrats and neocons will mean?

Aaron Maté: James Carden, contributing writer at The Nation, executive editor for The American Committee for East-West Accord. His latest piece for ConsortiumNews.com is “Neocons Enlist in the Anti-Trump Resistance.” James, thank you.

James W. Carden served as an adviser on Russia policy at the US State Department. Currently a contributing writer at The Nation magazine, his work has appeared in the Los Angeles Times, Quartz, The American Conservative and The National Interest. He has reported from both rebel- and government-held eastern Ukraine.