If leftist candidate Jean-Luc Melenchon wins, he does not have enough of a social movement behind him to fulfill his campaign promises says Jean Bricmont.

If leftist candidate Jean-Luc Melenchon wins, he does not have enough of a social movement behind him to fulfill his campaign promises says Jean Bricmont. 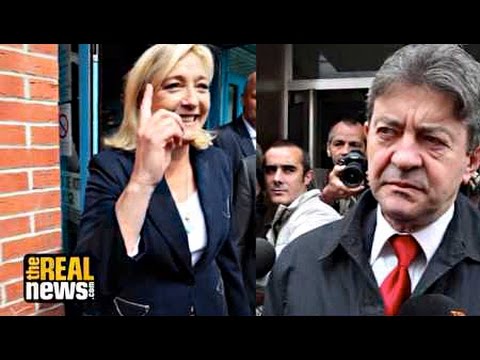 France will hold its presidential election this coming Sunday. It is one of the most closely watched electoral races of the year. The four front-runners in the race are almost even in the polls, and up to a third of the electorate has said that they are still undecided.

Only the two top vote getters on Sunday will move on to the second round. This means that France could face a situation on May 7th, in a run-off vote that will be between the far right candidate, Marine Le Pen, and the leftist candidate Jean-Luc Mélenchon.

Joining us today from Paris to analyze the upcoming election is Jean Bricmont. Jean is a Mathematical and Statistical Physicist at the University of Louvain, and the author of, “Humanitarian Imperialism: Using Human Rights to Sell War”.

He’s based in Brussels normally, but today he’s coming to us from Paris. Thank you so much for joining us, Jean.

JEAN BRICMONT: Thank you very much for having me.

SHARMINI PERIES: So, Jean, Thursday night there was a shooting incident in Paris, in which a police officer and a gunman with an assault rifle were both killed. Now, normally this could be seen as another criminal incident, but in this case the Islamic state claimed responsibility. How do you think this will impact the presidential race on Sunday?

JEAN BRICMONT: Look, these things are very difficult to predict. How do you measure these things? I mean, people say it will help Marine Le Pen, but it could also help Macron because the people want to block Marine Le Pen, they vote for Macron since he’s considered the most likely candidate to beat her in the run-off, which I think is the worst candidate. But he’s likely to be the one… People may rally around him because he looks like the centrist candidate.

SHARMINI PERIES: Now, this is probably the most wide-open presidential race in French history, some people say. One of the reasons for this is that up to one-third of the voters are still undecided. What is the reason for this?

JEAN BRICMONT: Well, I think none of the four candidates can actually govern the country. Let me explain why.

Marine Le Pen and Jean-Luc Mélenchon are too divisive. I mean, even if one of them is elected by accident, by a rejection of the other candidate, then they will have a hard time governing, because they’ll have half of the country against them.

Now, Fillon could gather more people because he’s on the traditional high… But he’s very conservative, very Catholic and so on … He also very, well, he’s the more neo-liberal of all, and he’s also had lots of affairs, as they say, when they have a … fictitious employee… the office, his wife, and things which are really not very important, but people make a lot of fuss about it. And he will have a hard time governing.

And finally Macron is of course, the guy who is presented by the whole media, by all the powers that be, by all the pro-European people, etc., pro-NATO people, as being their candidate. And, of course, he may win just for that reason. Because the people watch TV then they will be sold Macron, if you don’t go on the web, they don’t do the… they’re not politicized, they may vote for Macron. So, Macron may win.

But he will have a hard time governing, because I think he’s totally vacuous. He has no real program, he has no real charisma, and he will be quickly exposed as the fraud that he is. So, I don’t see any of the four candidates governing, actually.

SHARMINI PERIES: Now, you dismissed the corruption scandal around Fillon as not so significant, although people make a big deal out of it. But, corruption is an ongoing problem, in terms of our political leadership. Why do you dismiss it?

JEAN BRICMONT: Well, because to be a good president, I think you have to be fair, you have to be a killer, no? Every American president has been killing a large of number of people, including Obama with drones, and wars, etcetera. Fillon was Prime Minister during the Libyan war. On my book it’s far more important than the fact that he got offered some clues… by some rich person. It’s far more important, but nobody mentions that.

I’m sorry, but war and peace are far more important, and it seems to me that they’re all going to be engaged in large number of murders. Whether it’s presidents, or, I think it’s a detail, yes. But, of course, it does impress, also the amount of money which is involved, is not enormous, compared to the spending of the state, or the spending of everything else.

But of course, he does impress the ordinary, the average worker, since the guy has put aside a million euro, or something like that, in his pocket. Then, of course, it does impress people. But I don’t think it’s fundamental, as far as his program is concerned.

I don’t see any honesty like that in Fillon. But I don’t think the others are all that different. They also–

SHARMINI PERIES: Well, this is what I was going to ask you, one of the surprising things coming out of this election race, is the rise of the leftist candidate, Jean-Luc Mélenchon. He managed to rise rapidly in the polls recently. What are the reasons for this?

JEAN BRICMONT: Well, I think he’s a very, very good speaker. He’s an extraordinary, talented orator, and he’s able to, you know, build up on the discontent that people have with the mainstream left, or the so-called left. So, he does gather what is left of the left in France, in the socialist party, which is started to be 10%, or something like that.

So, and the official socialist candidate, the real socialist candidate is Macron. Macron of course, has lots of votes. The problem with Mélenchon is that he’s really supported by 20-25% of the people. If there is a run-off with Marine Le Pen, he may win, but that doesn’t mean that he will have the majority of the population behind him.

And the problem I have with Mélenchon, is that his program, you see, there is a bit of difficulty, which I think the Americans, progressive Americans don’t appreciate, is the question of the European Union. The European Union is viewed, I think, sympathetically, by many Americans.

Why would Poland, or Romania, not accept being a source of cheap labor? Why would Germany accept to give up the fiscal austerity? I mean, it’s unrealistic to renegotiate those treaties. So, the only possibility is to get out of the European Union, which he’s not ready to do. And which I think the French population is not ready to do.

So, there are some basic contradictions, and basic difficulties in his program, you see. So, I am happy that he rises in the polls, I should say that. But, I think if he’s elected then we’re going to have a real… really hard time, and I’m afraid that he will disappoint the left, as Mitterrand did in 1981.

Mitterrand also had an unrealistic program; he changed it in 1983, and the affect of disappointment and enunciation, and people being turncoat, and people eventually becoming pro war, pro-intervention, as they are now. I mean, the successor of Mitterrand, that, I think is an affect which is really devastating, and which will … now.

SHARMINI PERIES: Jean, is there a possibility of Mélenchon and Hamon combining their efforts, and perhaps Hamon throwing his support behind Mélenchon, in order to garner enough votes to be the run-off candidate with Le Pen?

JEAN BRICMONT: Well, you see, the election is in two days. Hamon has not dropped out of the race. So, I mean, he’s not going to drop in the next two days. Also realize that if he drops off and he doesn’t have 5% of the vote, then he doesn’t get reimbursed for his election campaign expenses. So, of course he will need 5%, he will hang in the race, even though he does very badly. And I don’t think he’s going to give up entirely. He was there to hurt Mélenchon.

I think the socialist party doesn’t want to have Mélenchon, they want to promote Macron. So, it seems to me, that even though … is … mediating for him, he’s not going to give it up. I hope the voters will turn away from him. But it’s only up to the voters. And sometime the voters are really attached to the old socialist party. And they really don’t like Mélenchon.

Depending on which poll you look at, it could be any of two of the four candidates could be in the second round.

SHARMINI PERIES: Right. And how do you think France’s establishment will react if Le Pen and Mélenchon make it to the run-off? Which candidate will they support?

JEAN BRICMONT: Oh, I think Mélenchon will win. If it’s Mélenchon versus Le Pen because, you know, the hysterical campaign against Le Pen, like there was in 2002. I mean, people won’t like Mélenchon, but they will think that Mélenchon is more malleable than Le Pen. And if Mélenchon is elected then they’ll work on having him not fulfill his campaign promise, like they do with Trump in the United States about, you know, and no intervention and peace with Russia, etcetera.

He’s still on about that, and Mélenchon … very quickly about other issues. Like … increase, like Mitterrand did. To tell you the truth, I think that change can come when there is a very strong social movement behind the candidate. I don’t believe in elections that say if you like somebody, then he’s going to do what he says. If he doesn’t have a strong social movement behind him, and Mélenchon at this point does not have that. He has a movement, but not strong enough, I think, to really sustain the attack.

The attack are, if he does… you know, his social policies, if he tries to break with the European Union and have hysterical media campaign against him. It’s not going to be easy. Also you need the majority in the parliament. Where is he going to get his majority? He will have to get it from the socialist party, and the socialist party is totally committed to the status quo.

SHARMINI PERIES: All right, Jean Bricmont, I thank you so much for joining us today. And we’ll be watching the results on Sunday, and we’ll look forward to having your analysis once we have the results. Thank you so much.

Jean Bricmont is the author of Humanitarian Imperialism: Using Human Rights to Sell War. He is also a mathematical and statistical physicist at the University of Louvain, and he is the co-author of Fashionable Nonsense: Postmodern Intellectuals’ Abuse of Science.

September 11, 2019
Sign Up for Our Newsletter
Help Us Make Real News!