Low-income communities and communities of color are disproportionately impacted by pollution across the United States, according to a new study by economist James K. Boyce

Low-income communities and communities of color are disproportionately impacted by pollution across the United States, according to a new study by economist James K. Boyce 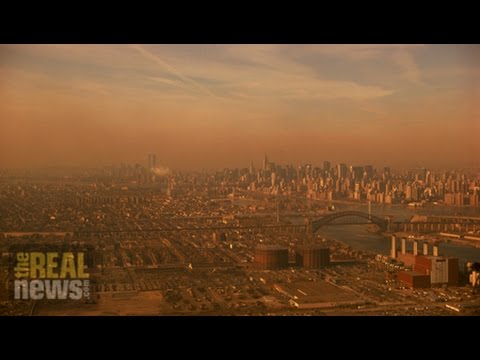 A new study that compares disparities in exposure to industrial air pollution in the U.S. states and congressional districts applied to poor and nonpoor, to whites and nonwhites, found that the inequality in America is in the air that we breathe. The study was conducted by James Boyce, Klara Zwickl, and Michael Ash. It was funded by the Institute for New Economic Thinking.

What is new about this study is that researchers developed different inequality measures and applied these measures both at the level of individual states as well as the 435 congressional districts in order to get a sense of how unequally exposure to industrial air toxins is distributed in these political jurisdictions.

Here to discuss what they found that in the study is James K. Boyce. James K. Boyce is the codirector of the Corporate Toxics Information Project at the Political Economy Research Institute (PERI) at the University of Massachusetts Amherst.

Thank you so much for joining us, Jim.

JAMES K. BOYCE, PROF. ECONOMICS, UMASS AMHERST: Thanks for having me, Sharmini.

PERIES: Jim, applying industrial toxins to political jurisdictions would produce some very interesting results. What did you find?

BOYCE: Well, I’d say probably our most striking finding was that when we use the same kinds of measures that we’ve used for other types of inequality–inequality of income distribution, inequality of wealth distribution, and so on–we find that inequality in the distribution of pollution exposure, at least in the case of industrial air pollution, which is what we focus on in this study, is even more unequal in the United States than income inequality, for example. And we took that to be a rather interesting and important result.

What we also demonstrated, of course, is that it’s actually possible to measure these things. It’s not something that is completely beyond the capacity of scientists or social scientists to do. And so, in addition to thinking about overall levels of environmental degradation or pollution, what this lifts up is the importance of looking at how the harms from pollution and environmental degradation are distributed across the American population.

PERIES: Is that because when we think of building a coal plant or industrial waste plant, we think, oh, let’s put it over there in that community and that neighborhood, where there isn’t going to be a resistance to this kind of a structure?

BOYCE: Well, what you’re pointing to is the fact that there is a correlation between where hazards are sited and some of the socioeconomic characteristics of the surrounding population. And in particular we tend to find that low-income communities and people of color bear disproportionate burdens. They are more likely to live in proximity to these hazards.

Now, why that disparity arises is a matter that has been a focus of some research and some debate among students of environmental injustice. I would say that there’s fairly strong evidence that the dynamic you describe, that is to say, the siting of hazards in communities that are believed to be less capable of offering political resistance, plays a significant role in that correlation.

On the other side, there is some evidence that there is a phenomenon sometimes described as move in, which is that even if a hazard were sited in an average community, the impacts of that hazard on property values and on the desirability of living there would be one where people could afford to do so, move out, property values decline, and poorer people move in.

The fact that that’s not all that’s going on is suggested by the finding that even when you control for the income of the surrounding population, you tend to find disproportionate percentages of people of color, African Americans and Latinos in particular. And so that suggests that it’s not just about property values and purchasing power, but that it also has something to do with political power and how that’s distributed in our country.

PERIES: And that is an interesting element. Did you apply Democratic districts and did you apply the lens of Republicans versus Democrats in order to map your findings?

BOYCE: That would be an interesting exercise. What we did was we calculated these three different measures of inquality at both the level of the state and at the level of the congressional districts, as you mentioned in your introduction. The data are there accompanying the paper, and it would not be a difficult thing to look to see if there’s any correlation between which parties are in power and how unequally pollution is distributed by either or all of these three measures. We haven’t undertaken that exercise ourselves, but glancing through the data, my impression is that the political party that happens to be in control doesn’t seem to have a very noticeable effect on the degree of inequality in the distribution of pollution. And this, as in, unfortunately, a number of other respects, my impression is that our parties don’t actually differ all that much.

PERIES: And are the new EPA regulations on a clear /æk/ going to have any effect on the air quality of the poorer communities and the people of color communities?

BOYCE: They will, yes. Whenever regulations or other policies are implemented to try and reduce pollution, including air pollution, and that includes policies aimed at reducing carbon dioxide emissions from power plants, for example, because along with carbon dioxide, these facilities emit many other hazardous air pollutants when they burn fossil fuels, whenever those rules go into effect, it improves air quality, and insofar as it’s low income people and people of color who bear disproportionate burdens from pollution, they, in principle, at least, stand to gain disproportionately as well. Now, whether or not that happens partly depends on how the regulations are framed and how the interventions are implemented. Although in theory it should bring significant gains to disadvantaged and overburdened communities, in practice I think it’s quite important to look at what’s being done to make sure that those impacts and those potentials are realized in practice.

PERIES: And finally, James, how does somebody living in Baltimore, for example, where there is a coal plant and an incinerator being planned, get wind of your report? And how can they access it so that they can see how their own communities are doing?

BOYCE: Well, I think if you just Google my name, Boyce, and INET, which stands for the Institute for New Economic Thinking, which is the outfit that funded our research, you’ll find the report. You’ll find both a PDF of the report itself, which is about 35 pages long, and you’ll also find an interview I did that’s on the INET blog, which talks about some of the findings in more detail and some of the implications they have for public policy in the United States.

PERIES: Jim, thank you so much for joining us today.

PERIES: And we will also put a link to the study just above Jim’s bio. And thank you for joining us on The Real News Network.