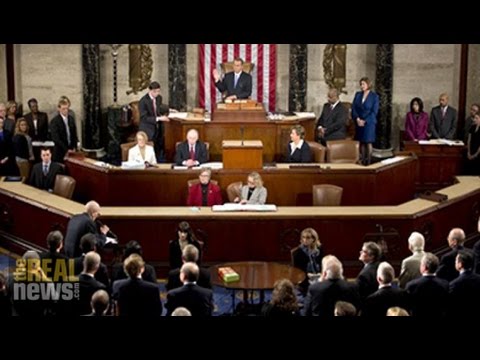 Before Congress went on its August recess, Maryland representative Chris Van Hollen introduced a bill known as the Healthy Climate and Family Security Act of 2014. It seeks to limit carbon pollution by optioning off permits to fossil fuel vendors. All the proceeds from the sale would then go to you and me, American citizens.

Now joining us to discuss all of this is our guest, James Boyce. He is the director of the Program on Development, Peace Building, and the Environment at PERI. He’s also a professor of economics at UMass Amherst, which is where he’s joining us from.

Thanks for being with us, James.

PROF. JAMES K. BOYCE, POLITICAL ECONOMY RESEARCH INSTITUTE: Thanks for having me back, Jessica.

DESVARIEUX: So, James, I think from your New York op-ed I can tell that you’re a supporter of this bill. Why in particular? What specifics about this bill do you like?

BOYCE: Well, in a nutshell, what the bill would do, Jessica, is put a cap on carbon emissions. The cap would initially be set at 10 percent below our 2005 level, and then would drop to 20 percent below that by 2020, and ultimately to 80 percent below that by 2050. And that’s the kind of transition that the scientists say we need to make not only in this country but worldwide if we’re to address the problem of climate change in anything approaching a satisfactory fashion.

Having established that cap, the second thing the bill would do is auction off permits, the number of permits being set by the cap, to the fossil fuel firms that bring carbon into our economy. A hundred percent of the permits would be auctioned, so there’d be no giveaways of permits, no trading of permits, no speculation by Wall Street firms, they couldn’t buy permits, etc.

And thirdly, the bill would take all of that auction revenue and give it back to the American people, to everyone with a valid social security number, on an equal basis for every man, woman, and child. So the money would come back to the people and thereby protect the incomes of households in the face of the inevitable increases in the price of energy that will come with a cap on carbon emissions. That increase on prices is a necessary part of the policy, because that’s what gives firms and households the incentive to invest in energy efficiency and clean and renewable energy alternatives.

DESVARIEUX: James, how does this bill differ from that cap-and-trade bill that failed in the 111th Congress?

BOYCE: Great question, Jessica. I think there are three really important differences. The first, which I’ve already mentioned, is this bill would have no room for speculation by Wall Street or banks or others in the market for carbon permits. Instead, 100 percent of the permits would be auctioned off, and the only entities that could hold those permits would be the fossil fuel firms that are bringing the coal, oil, and natural gas into our economy. So there wouldn’t be any room for this kind of third-party manipulation of the market, which a cap-and-trade bill, which is really cap and giveaway and trade–it gives away the permits rather than auctioning them–would allow. So that’s one really important difference.

A second major difference is that the total length of Congressman Van Hollen’s bill is just 28 pages. It’s simple. It’s transparent. It’s clean. The length of the bill that failed in the last Congress was over 1,400 pages, and partly that was because it had to have all sorts of provisions regarding carbon trading and securities markets and derivatives and all kinds of stuff–much more complicated than Van Hollen’s bill.

The third major difference is that under the Van Hollen bill, everybody, every holder of a valid social security number gets a carbon dividend back. There’s no playing favorites. There’s no effort to say, you deserve to get the money back and you don’t deserve to get the money back. The underlying principle is that the atmosphere, or our share of the atmosphere, belongs equally to all of us. Van Hollen’s bill actually says that right in the preamble. And so that universality of the dividend I think gives this potentially tremendous political appeal, not only in the short run, but also over the 30 or 40 years that it will take to achieve the clean energy transition. This is a way, just as in the case of Social Security and Medicare, that built into the bill will be political durability. The fact that we all equally benefit from this is something that I think will maintain political support for the bill over the long haul, regardless of which party controls the Congress or the White House.

DESVARIEUX: But James, do you really believe that at the end of the day you can get this passed in Congress? Because it seems like nothing really can get passed without this Congress. Is there even a political will to move in this direction?

BOYCE: Well, I think what we’re beginning to see now, Jessica, is a revival of interest in Congress and amongst the public in trying to move forward with some sort of climate policies in this country. Van Hollen’s bill has already attracted a number of cosponsors, including, for example, Eleanor Holmes Norton from D.C., Raúl Grijalva from Arizona, Peter Welch from Vermont. These are people who represent quite diverse constituencies across the country.

What it hasn’t managed to do so far, at least as far as I know, is obtain a Republican cosponsor. And my own view is that bipartisan sponsorship for climate legislation is going to be a key to the political durability of any bill that ultimately does pass.

However, I think that this bill has some things in it for Republicans to like if and when they sit down and start thinking again about climate policy as they did a few years back. The main thing that I think will appeal to them is that this bill doesn’t increase the size of government. It puts a price on carbon but returns 100 percent of the money to the people. The money doesn’t go to the government to fund government programs of one sort or another. In fact, the bill in effect cuts the size of government, because about 25 percent of the purchasing of fossil fuels and products made and distributed using fossil fuels in the United States is purchasing by government. So the government would be paying about 25 percent of the money that goes into the pot that ultimately gets redistributed to the public on an equal per person basis. Over the years of the bill, this would mean that billions and billions of dollars would be returned from the government to the American people. And I think that’s an element of the bill that will appeal to Republicans, and indeed to any Americans who have an aversion to anything that smells like big government. This is a small-government policy to address the problem of climate change in a way that protects the incomes of American households.

James Boyce, joining us from Amherst.

BOYCE: Thank you, Jessica. And let me mention that any of your viewers who’d like to know more about the bill can go to ClimateAndProsperity.org. You can find the text of the bill there, as well as some facts, etc., that give further information.

DESVARIEUX: Alright. Thank you so much for that information.