Part 3. James Boyce: Industrial agriculture threatening existence of small farmers growing corn in Mexico and Guatemala; potatoes in Peru and the Andes; rice in Bangladesh and Southeast Asia - farmers who maintain the reservoir for adaptation of crops to new insects, new pests, and climate change

Part 3. James Boyce: Industrial agriculture threatening existence of small farmers growing corn in Mexico and Guatemala; potatoes in Peru and the Andes; rice in Bangladesh and Southeast Asia - farmers who maintain the reservoir for adaptation of crops to new insects, new pests, and climate change 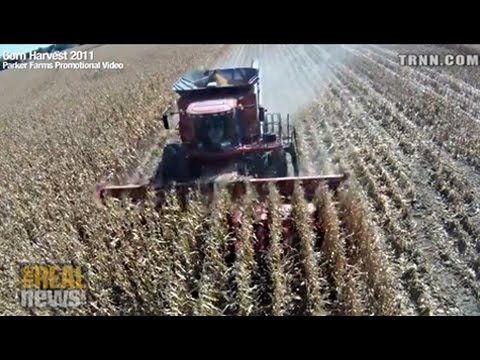 And now joining us again to continue our discussion about his book Economics, the Environment and Our Common Wealth is James Boyce. He’s director of the Program on Development, Peace Building, and the Environment at the PERI institute in Amherst.

Thanks for joining us again, James.

JAMES BOYCE, PROF. ECONOMICS, UMASS AMHERST: Nice to be back, Paul. Thank you.

JAY: So one of the things you take up in your book is the importance of biodiversity and the role of small farms, which sort of would buck a trend to larger and larger agribusiness. What’s the issue here?

BOYCE: Well, to understand the issue, Paul, it’s helpful to think about what underpins the long-term viability of large farms and industrial-style agriculture here in the United States, in Europe, and other countries around the world that rely on a small number of crop varieties for the vast bulk of their production. In the United States at any given time, a handful of corn varieties, for example, accounts for most of the production of corn, which of course is the biggest agricultural crop in the United States, the most acreage, most of it being used to feed animals.

That monoculture of corn, the fact that we grow a few varieties over huge areas means that in the farmers’ fields what you have going on is a process of natural selection–survival of the fittest, if you will–that gives you insect, pest, and plant diseases that are particularly good at eating that corn. And as a result, within a few years the varieties become obsolete. New pests and diseases arise that require the replacement of those old varieties with new ones. The average variety only lasts for about five years before it has to be replaced.

And the raw material for that varietal relay race, as the plant breeders call it, this constant effort to come up with new varieties that are resistant to the new pests and diseases emerging in the farmers’ fields, that raw material comes from the agricultural biodiversity that was created over thousands of years by small farmers around the world and has been handed down to us as the common heritage of humankind. And it’s small farmers today around the world, particularly in historic centers of crop diversity like Mexico and northern Central America in the case of corn, that continue actively to practice the stewardship of that biodiversity and provide, therefore, the building blocks for the long-term sustainability of agriculture worldwide.

The problem, of course, is that those people are gradually being forced off the land and forced out of the business–ironically, partly by imports of cheap corn from the United States and other countries that are practising industrial agriculture. They don’t get any reward down in the hills of southern and central Mexico or Guatemala for maintaining agricultural biodiversity. On the contrary, they get viewed as a bunch of backward peasants who ought to get a real job. I think we need to realize that in fact what they’re doing is providing an enormously valuable environmental service for humankind, and we ought to reward them for doing that.

BOYCE: Well, I think we already see a trend in the United States towards a revitalization of small farms here at home. The local food movement, the movement towards organic agriculture, the creation of community-supported agricultural farms, and so on, all of that is sort of really changing the trends in American agriculture.

But while I think it’s important to think about the future of small farms here at home, we also need to think especially about the small farmers abroad, especially in the centers of agricultural biodiversity which correspond usually to the centers of origin of our major food crops. So we’re talking about Mexico and Guatemala in the case of corn. We’re talking about Peru and the Andes in the case of potatoes. We’re talking about Bangladesh and Southeast Asia in the case of rice. These are the places where small farmers today maintain thousands and thousands of different varieties of these crops. They maintain the reservoir for adaptation of crops down the road in the future to new insects, new pests, and for that matter to climate change as well. And currently their livelihoods are being threatened by the spread of industrial agriculture around the world. In a way, it’s like the industrial agriculture system is killing the basis of its own long-term survival.

And so we need ways to reward the people who steward this agricultural biodiversity, not only by recognizing and appreciating the services they provide us, rather than dismissing them as a bunch of ignorant peasants who ought to get real jobs, but also by rewarding their communities, by providing the kinds of resources that will enable them to lead healthy and productive lives and to keep doing what they’re doing now, which is maintaining that reservoir of crop genetic diversity that we depend upon.

JAY: How serious are the consequences if that doesn’t happen?

BOYCE: I think the consequences are very serious indeed, Paul. I mean, there have already been some pretty close calls in terms of plant, crop disease problems that have emerged that could have had devastating consequences for world food supplies, for the production of wheat, for the production of corn. And it’s only the fact that plant breeders engaged in this varietal relay race, have been able to come up with resistant varieties that they’ve been able to head these things off.

And the way they come up with it, again, is to scroll through that inventory of diverse varieties that are maintained by small farmers in the fields. So this is–I think this is a big deal, Paul. It’s not a case of, oh, we’re going to be sentimental and we need to do something for the small farmers and the peasants around the world to make ourselves feel good. That’s not the main story here, Paul. The main story is that the long-term survival of humankind, our ability to produce the food on which we depend, depends on keeping these small farmers on the land and keeping the diverse varieties they grow alive and part of the suite of biodiversity on which we can depend in the future.

JAY: Thanks for joining us, James.

February 28, 2020
Sign Up for Our Newsletter
Help Us Make Real News!