But the French right could come to power in 2017 as the Socialist Party continues to lose support due to the unpopular measures, says Jonah Birch, contributing editor at Jacob magazine.

The changes will grant employees greater power to lay off workers and increase weekly working hours, leading some like Birch to question claims by the Socialist Party that this will decrease unemployment.

"The idea that these reforms are going to solve France's unemployment problem - we really should be skeptical of those arguments," says Birch.

For the last few years, the nation's main labor market policy sought the liberalization of labor code and granted tax subsidies for employers without conditions that would benefit workers.

Birch also says the changes are being pushed by the domestic elites and are not driven by the European Union.

Hollande implemented the measures by presidential decree earlier in May.

But the French right could come to power in 2017 as the Socialist Party continues to lose support due to the unpopular measures, says Jonah Birch, contributing editor at Jacob magazine.

The changes will grant employees greater power to lay off workers and increase weekly working hours, leading some like Birch to question claims by the Socialist Party that this will decrease unemployment.

"The idea that these reforms are going to solve France's unemployment problem - we really should be skeptical of those arguments," says Birch.

For the last few years, the nation's main labor market policy sought the liberalization of labor code and granted tax subsidies for employers without conditions that would benefit workers.

Birch also says the changes are being pushed by the domestic elites and are not driven by the European Union.

Hollande implemented the measures by presidential decree earlier in May. 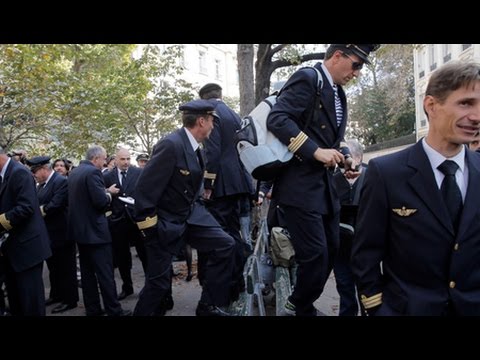 Air France pilots are escalating along running contract dispute by threatening to disrupt travel for an extended period of time. They’re going on strike, just as France prepares to hold the European Soccer Champion in mid-June. France’s oil refineries, nuclear power plants, rail traffic, and air traffic control have all gone on protest strikes. Many more Unions are joining them every day, as a part of a union and student led movement opposing the labor law reformed, that French socialist president, Francois Hollande, implemented by decree in early May.

Joining us form New York City to discuss all of this is Jonah Birch. Contributing editor at Jacobin Magazine and a Ph.D. student in Sociology at NYU whose dissertation focuses on France’s 35-hour work week. What good timing. Thank you so much for joining us Jonah.

JONAH BIRCH: Thanks for having me.

BIRCH: Sure I think that this is the whole push for liberalizing reforms in the labor market and labor law reform has been central to what the EU and the entire project of European integration has been about over the last couple of decades. I think it was essential, one of the keep provisions of one of the so called Five Presidents Report which Juncker helped to coauthor, which came out last summer.

On the other hand, I think it’s worth it to say that French political leaders, the French political class has no need for the EU to push it down the road of labor market reform. This is something that is very much internally driven in the French case. And more than anything I think that the EU functions as a bit of an excuse more or less effectively for people like Hollande and [Baus] to push through reforms that they already want to push through essentially.

PERIES: Jonah describe for us what’s going on in France with the labor movements and the student movements coming together.

BIRCH: Yea I mean you know this is something there is on the one hand a long tradition of this and particularly in the decade and a half after there was a big strike movement of December of 1995 that stopped a proposed pension reform, led by workers in the rail sector. Over the decade and a half after that there were a whole series of neoliberal reforms of labor law, of the welfare state, some of which were quite successful. In 2010, there was a mass movement against a plan pension reform being pushed through by then President Nicolas Sarkozy who was a very hardline right wing president and that movement despite enormous numbers of people coming out, failed to stop the pension reform. And I think there was a sense that this kind of social explosion wasn’t necessarily possible anymore in France.

Yet as we’ve seen something very much in that vein has emerged over the course in this spring and certainly high school and university students have been central to the protests and have been quite heavily mobilized, maybe at a level that they haven’t been since 2006 when a student movement against a proposed reform of employment contracts for young workers successfully stopped that reform. So they’re mobilized right now at a very high level but the degree to which that spread to the unions and to the employees in key sectors has been really remarkable and it’s really ratcheted up over the last couple of weeks.

Just today we’re seeing the beginning of an already announced strike in the railways. I think this is the 3rd in three weeks. This is potentially an indefinite strikes, that’s what the [ ], one of the two main unions in France has been calling for. On Thursday, they’re going to be joined by workers in the Paris metro system and we’ll see how effective the strike is there. But certainly over the last few weeks there’s been a real escalation of the protest movement and it’s something that is potentially very explosive and very exciting.

PERIES: Now President Hollande and the labor minister are all defending these reforms to the labor law in France are saying well this is just lifting some rigidities and this is really going to help improve the situation when it comes to the level of unemployment France is faced with. 10% in the regular population, 24% when it comes to youth. Yet it is they that are out there protesting. What is the real issue here?

BIRCH: Certainly France suffers from very high unemployment and particularly youth unemployment, long term unemployment, very high rates of both of those in France. The government is pushing this and the argument being that this is essential to solving those problems. Obviously that argument is not flying with the public, the majority of which supports the strikes, and there’s been real majority opposition to the labor law reform which the government has been trying to pursue since it was announced in February.

I think that the idea that these reforms are going to solve France’s unemployment problem, we really should be skeptical about those arguments. For example, some of the key provisions in the new law for instance would make it easier for employers to lay off workers for all sorts of reasons. The law would also allow employers to demand workers work a higher number of hours per week. So if it’s easier to lay off workers and to get your existing work force to work more. How exactly that’s going to lead to increased employment is not entirely clear. I think there’s a lot to question there.

Over the last few years the government’s main employment strategy, the strategy for the French labor market has been, on the one hand to liberalize some of the rules in labor code and then on the other hand, to give employers really enormous tax subsidies while demanding very little compensatory changes in their employment, adding new workers, things like that. We’ve that that’s been a remarkably ineffective strategy. There’s a lot of skepticism that this is going to solve the problems with unemployment. Obviously as you see, the very constituency the government is claiming to be fighting for is very much opposed to it.

PERIES: Now I understand that Hollande has come out and made some offers, particularly to teachers and tried to negotiate with the rail workers. Do you think it’s going to work in order to subside some of these protests?

BIRCH: That remains to be seen. The government’s strategy from the beginning has been to try and slit the opposition. This reflects a longer term strategy both of this government and of previous governments that have tried to push through very contentious reforms around the labor code or around the welfare state. What they’re trying to do is to find sections of the labor movement or student groups or potential opposition forces that they can pick off and bring into the process of pushing through these laws, sort of co-op them.

In the past that’s really focused on the [segete], besides the [segete] the other of the two largest union federations in France, the more conservative and more moderative of the two unions which has been willing often to negotiate agreements with the government over reforms that are closed by some of the other unions or the left in France. In this case that’s proven to be more difficult, really because of the depth of the opposition to the law and how bad it would look for the [segete] leadership to negotiate an agreement. They still want to do that and that really is the government strategy and they’re going to try and pick off whatever opposition forces they can. Over the weekend the head of the more militant [segete] union, traditionally considered the leading force of the more struggle oriented trade unions in France, indicated that there may be potential wiggle room and he may be open to a negotiated agreement as long as the government backs down on some of the key points in the law.

Now that is a very contentious provision. Use of it reflects a real weakness on the part of the government. Now the bill has gone to the senate and it’s going to go back for another reading in the national assembly in July and we’ll see if the government is going to be forced to result to that strategy. Last year the government used the same constitutional provision, article 493 to push through another very contentious labor law reform bill and it really hurt the government’s standing with the public and intensified what are some fissures inside the Socialist party.

It’s not just the question of principle. There are elections coming up next year and the government is in a very weak position and there’s a lot of fear that the Socialist party is going to get an absolute drubbing, the right is going to power, which is very likely, and in the worst case scenario you’ll get a situation where in the presidential election, the mainstream right and the far right [inaud.] will make it through the first round in voting in the presidential election and get to the second run off round. Now that would be a real disaster for the left. So there’s some electoral considerations that are also driving this internal tension in the Socialist party.

PERIES: Alright Jonah, there’s so much to cover here and it looks like it’s not going to go away anytime soon. So I hope to have you back very soon.

PERIES: That was Jonah Birch, contributing editor at Jacobin magazine. Thank you for joining us on the Real News Network.

Jonah Birch is a Contributing Editor at Jacobin Magazine and a PhD student in Sociology at NYU. Birch’s dissertation is on France’s 35 hour work week.