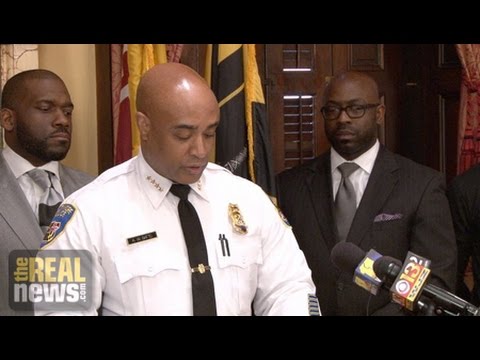 STEPHEN JANIS, TRNN: As crime continues to climb in Baltimore and the controversy over the handling of the unrest following the death of Freddie Gray in police custody consumes the city, a major change in leadership atop the city’s police department is announced Wednesday. Current Commissioner Anthony Batts is out as top cop, to be replaced by Deputy Commissioner Kevin Davis.

The former chief of the Oakland Police Department was forced to resign, after the mayor said in a terse email released Wednesday that Batts had not done enough to quell violence in the city, which is well on its way to one of its most murderous years in recent history. The move comes as continuing distrust between the Department and the community has led to an alleged work slowdown by cops while a wave of violent crime has pushed the homicide rate up to 40 percent over last year.

Batts’ tenure was fraught with the conflicting reality of both these competing problems, but was also defined by the killing of Gray, which led to the indictment of six officers and worldwide attention to police brutality in Baltimore. It’s a culmination of missteps and outright malfeasance that former cops say has created a department on the brink of dissembling. Neil Franklin, a former commander in the Baltimore Police Department, says the commissioner lacked leadership to right an already corrupt department.

NEIL FRANKLIN: So, as it relates to reducing violent crime, as it relates to bringing the police department and the community together, as it relates to gaining the confidence and the support of the men and women who he is supposed to lead, I would say that he’s probably failed at all three of those major areas.

JANIS: An organization that civil rights attorney A. Dwight Pettit says has been nearly immune to reform.

A. DWIGHT PETTIT: And so if there’s not a mental intent in terms of the aggressive nature of policing that sort of creates and lends itself, there’s no community involvement because community’s not cooperating for the police. So if it’s, if you don’t have a hostile environment you have definitely a negligent or hostile negligence type of–I’m mixing two words I guess. Sort of a hostile mindset in terms of the negligence that’s created because of what’s allowed to happen in the urban environment.

JANIS: His concern, a lack of stability in leadership positions makes it impossible to transform it. Still, despite the change at the top, Franklin says the Department and the city that it serves has a long way to go before real reform sets in.

FRANKLIN: Don’t–don’t wave the flag of victory just yet. Having a police commissioner removed, hopefully so that the city and the police department and the community can move forward, is one thing. So that removal is one thing. We’ve got a long way to go before you can wave any flag of victory.