John Ackerman: Last two Mexican presidents relied on US support for legitimacy not found in polls

John Ackerman: Last two Mexican presidents relied on US support for legitimacy not found in polls 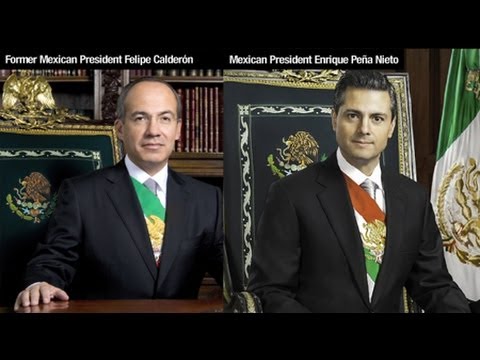 We’re continue our discussion with John Ackerman about Mexico, narco gangs, U.S. policy, and the roots of these problems.

Now joining us again, as I say, is John Ackerman. He joins us in Baltimore. He’s a professor at the Institute for Legal Research at the National Autonomous University of Mexico. He’s a columnist for Proceso magazine and La Jornada, and he’s editor-in-chief of The Mexican Law Review.

JAY: So in this segment I want to talk about U.S. policy and, you know, how much of this unraveling of Mexico is a result of American policy. But I just want to–just one little caveat ahead of this. I am not one that thinks that everything should be blamed on the Americans. I am not one that thinks that the domestic elites aren’t responsible to a large extent for what goes on in Mexico and other countries. But it’s all done within the context of U.S. policy–and let me get back here–and nowhere more than Mexico, which is right on the border.

ACKERMAN: Yeah, that’s where I was going to start, actually, Paul. I mean, the central problem are precisely these Mexican elites who are being propped up by U.S. government and policies. Right? So what has U.S. policy towards Mexico [incompr.] we already talked in the first segment a little bit about drugs, migration, guns. Those are directly impacting Mexico and leading to this outsourcing of violence and crime and death to Mexico. But beyond that, what would be U.S. policy towards Mexico? It has basically consisted of–at least recently–in propping up this corrupt political class which has been ruling Mexico for the last–well, for much longer, but particularly concerned about the last 20 years of this double failure of economic and political reform, which have not led to liberalization in any sense, either in the political or the economic sphere.

JAY: [incompr.] to a lot of rich Mexicans, including one of the richest men in the world now. Carlos Slim is a Mexican.

ACKERMAN: Carlos Slim, only he’s now number two, but, you know, he’s been number one for a while. Yeah. Sure.

And so we have Calderón, we have Peña Nieto, the last two presidents. And what has the relationship been? It’s been a good relationship, unprecedentedly good. So now the DEA can walk into Mexico armed.

Now Mexico is moving forward towards privatizing oil, which is a very high strategic priority for the United States, specifically particularly in the context of Venezuela. They’re losing influence there and they need to shore up oil reserves in Mexico.

And Calderón and Peña Nieto, just talking about the last two presidents, have promised increased collaboration with the Mexican–with the U.S. government and with U.S. interests in exchange for, you know, public patting on the back ceremonies. So the most recent one was Obama giving a public speech in the national anthropological museum, in which the first half of Obama’s speech was literally torn out of the first half of Peña Nieto’s inaugural on 1 December 2011. He said exactly the same things. It was quite remarkable. Previously he had a huge state dinner here in Washington. I think it was the first state dinner Obama organized for a foreign president, with–really over the top a few years ago, when Calderón first came to Washington. And he called Calderón the Eliot Ness of Latin America, Obama, the crimefighter.

JAY: And this is–for people that don’t know, Calderón was the previous president.

ACKERMAN: Yes, Calderón was the previous president, who really entrenched and got serious about the drug war in Mexico. And so Obama was saying he was, you know, like the anti-gang fighters in Chicago. So this is the exchange–this is a historical story that, you know, when the Spaniards came to Mexico as imperial colonialists, they would offer mirrors, right, and this would be very fascinating for the indigenous people, ’cause they hadn’t–they didn’t know what a mirror was, they hadn’t seen it. So they actually thought it was highly valuable and exchanged these mirrors for gold, right, which was actually what was running the global economy and the Spaniards were looking for.

And so in a similar way, these presidents accept sort of mirrors being, you know, reflected out on the public sphere supported by the U.S. president, particularly against their own people. I mean, both Calderón, the previous president, and Peña Nieto used this relationship with the United States to shore up the legitimacy which they didn’t get in the polls, right? So Calderón won by 0.5 percent in 2006. There was no recount. There were million-person protests. No transparency, no recount [crosstalk]

JAY: And just to put it in some context, as of doing this interview, the Americans have still not recognized Maduro in Venezuela, who won by 1.5 percent, right?

ACKERMAN: Exactly. That’s a very good–I think the Venezuela-Mexico contrast or comparison is–highlights the double standard of U.S. foreign policy in Latin America, because Peña Nieto is much more dangerous than Hugo Chávez ever was in terms of, you know, peace and the rule of law in the Americas. But Peña Nieto’s pro-American and Chávez obviously wasn’t [incompr.] Maduro. So you have this very clear double standard going on.

And so that would be–it’s a very important reason for why Mexico as–is as it is today, beyond sort of the economic and drug and gun control issues, which are obvious, just the diplomatic relationship and the role of the United States propping up this corrupt political class.

And so, for instance, everybody talks about Mexico today, about the pact for Mexico. Right? So all of a sudden, in unprecedented fashion, all of the major political parties–there’s three major political parties–center, right, and left, or supposedly right, supposedly left–are now together negotiating public policy, right, instead of fighting against each other and Congress.

Now, to me, this is actually quite beautiful, because it shows how the political class in Mexico has to come together in order to prevent social mobilization, unrest, and protest. Even the leftist party feels like it’s–this has been true for a long time, but now it’s sort of publicly displaying that the leftist party is more interested in getting along with its buddies in the political class and less interested in actually looking for social legitimacy. So this–they’re closing out society. And this to me is unfortunate, because the politicians are getting together and not including society in this pact for Mexico.

But it’s also a great opportunity, because we do have these millions of, as we were talking about before, young kids, and far beyond them as well, I mean, throughout the country, not just the youth, who are mobilized and who now see the pact for Mexico, the union of the big parties, as an exemplary thing of how the political class has totally departed from any interest in society. And this creates a space for social activism.

JAY: And what’s in this space now? Give us a picture of what this, the oppositional social activist movement, look like. What are the different components of this?

ACKERMAN: Well, it’s very much just unorganized. It’s this–uncoordinated at this moment. It’s been–these kids, for instance, the youth are very much the victims of neoliberal policies. The most recent studies, for instance, show that over the next 15, 20 years, the percentage of college graduates who will get formal jobs is about 15 percent, and those who will get it in their fields is under 10. Okay? So they’re victims of neoliberalism. They’re upset. They’re protesting.

But there’s no coordinating body, which actually might be good at this moment, because coordinating bodies, you know, with the history of corporatism and co-optation of movements in Mexico, it might actually be good that we have this more spontaneous uprising.

There is a leftist politician, who’s López Obrador, who has run twice for president, who has broken with the PRD, which was the–is the center-left party but has now gone with Peña Nieto. López Obrador is creating a new political party called MORENA–very important. The name itself, morena, is dark, dark-skinned. Morena is how we in Mexico call the Virgen de Guadalupe, which is sort of the Mexican patron saint, right?

JAY: And he’s kind of more in the sort of leftist vein of what’s happening in the rest of Latin America.

ACKERMAN: Yeah. People have been trying to locate him near Chávez or Lula, whatever. He’s sort of very different from all of the other leftist leaders. Unlikely he’ll be presidential candidate again in 2018, although it’s possible.

The hope from MORENA and from all these independent social movements–MORENA by no means is controlling or coordinating all of them–is that we will get new leaders. Right? That’s what Mexico needs, new young smart people who are aware of what’s happening and are willing to participate in politics in an independent, honest way. Mexico is begging for new leaders to come up. And if that happens–they’re there. But if they start finding ways of articulating and putting together proposals, we could get a real possibility for a new political situation in Mexico. And I’m not trying to say it depends on the leader or anything like that, but I think we’re in a similar situation in Mexico today as was Venezuela, Ecuador, and Bolivia before, you know, Evo, Correa, and Hugo Chávez, for better or for worse.

You know, we could talk about this particular context, but we are in a moment in which people don’t trust institutions, they don’t trust politicians. There is a mass group of people who are aware that things are going wrong and want to participate. And so that is a recipe for possibly pretty progressive and positive political change.

JAY: Alright. Great. We’re going to be doing a lot more coverage of Mexico in the coming months and years. And, in fact, we want to make it a regular component of The Real News, and John’s going to help us with that.

So thanks for joining us.

ACKERMAN: A pleasure, Paul, as always.