John Ackerman of UNAD says that acts of state violence, like the police killings at the Oaxaca teacher strike and the "disappearance" of 43 students Guerrero, show that Mexico is not a democracy

John Ackerman of UNAD says that acts of state violence, like the police killings at the Oaxaca teacher strike and the "disappearance" of 43 students Guerrero, show that Mexico is not a democracy 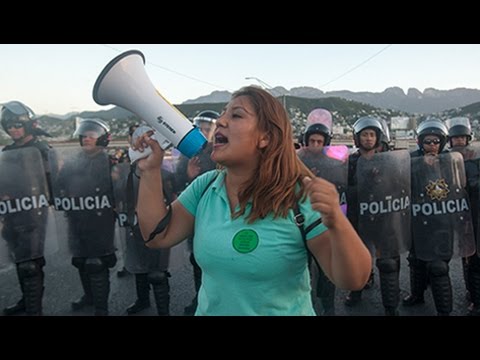 JOHN ACKERMAN: Almost a dozen teachers and community members fell dead this Sunday, June 19 in Oaxaca. The press said this happened in clashes between police and teachers, as if it was somehow a balanced battlefield. No. This is not the case.

On one side we had federal police, masked gunmen with high-caliber weapons, at the service of a government which now has a long track record of assassinating, eliminating its adversaries in various parts of the country. On the other hand, we have teachers, armed with pencils and notebooks, defending their jobs, defending their freedom of speech, and high-quality education.

The Mexican government now has a few years, ever since, particularly, Enrique Pena Nieto came to power on December 1, 2012, we’ve had every few months massacres committed by state government forces. The most obvious case internationally known is the disappearance of 43 students and the assassination of another 3 on the night of September 26, 2014 in Iguala, Guerrero. Students from the Ayotzinapa teachers’ college. But before that we had the Tlatlaya massacre. After that, Apatzingan, [inaud.].

The Mexican security forces are out of control. There is no limitation of force, and there is a systematic abuse of human rights. This last Sunday we had a protest of teachers, supported by community members. They were blocking a highway, a very typical form of protest, against the education reform. [Register the] parentheses, here. The education reform is not really an education reform. It’s a labor reform designed to push out the most critical participative teachers. It’s designed to purge the long history of democratic unionism and critical, even revolutionary, education, which Mexico’s had for the last hundred years.

That’s why the communities have come out to support the teachers. And they were doing a blockade of a highway, and hundreds of highly-armed federal agents came in, and started to shoot. First tear gas, then bullets–then rubber bullets–and then real bullets.

This is not the way institutions in a democratic context are supposed to behave. Well, surprise. Mexico is not a democracy. This is one more case which demonstrates to the world that Mexico is today run by a very small handful of oligarchs and corrupt politicians who stole their electoral offices, and have now increasingly lost any semblance of public or citizen legitimacy, and are only left with violence to impose their control.

In Mexico, once again, we make a call to the international community for solidarity, for support, just as you supported us in our struggle to find the truth of the 43 Ayotzinapa students. Today we need your support even more, because if the international community does not protect us, does not help us, does not reach out their hand to us, we will continue to have these kinds of massacres against activists, against teachers, and against students. Mexico is not a democracy, but it can be with international support, and with a national strategy of union and working together for a better country.