Lara Al-Qassem, an American student of Palestinian origin, has defeated an Israeli effort to ban and deport her over her prior support for the Boycott, Divestment and Sanctions movement, BDS. We speak to her attorney, Yotam Ben-Hillel

Lara Al-Qassem, an American student of Palestinian origin, has defeated an Israeli effort to ban and deport her over her prior support for the Boycott, Divestment and Sanctions movement, BDS. We speak to her attorney, Yotam Ben-Hillel 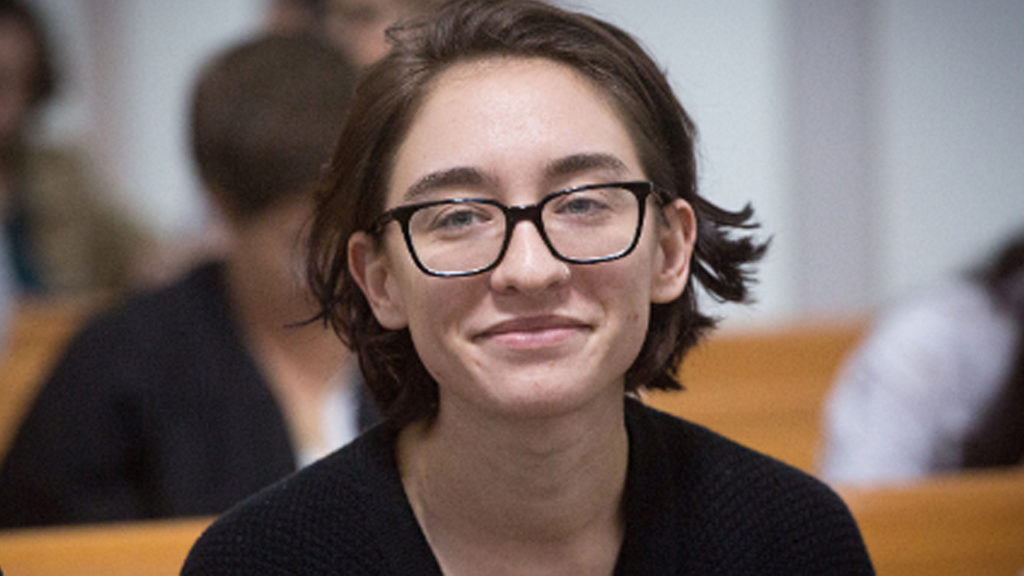 Imagine being detained and ordered into deportation just for trying to attend a foreign university. That’s what happened to Laura Alqasem, an American student of Palestinian origin. Alqasem arrived in Israel earlier this month to study law at Hebrew University. Alqasem had a student visa, but was detained for over two weeks. Israel fought her entry because Alqasem was on a blacklist for supporting the Boycott, Divestment, and Sanctions movement, or BDS. Her detention made headlines around the world and sparked a major legal battle. This is one of Lara Alqasem’s attorneys.

ATTORNEY: The Minister of Strategic Affairs, together with the Minister of Interior, have decided that BDS is not about actions. It’s not about activists. It’s about thought. And they have prohibited thought. And it’s unfortunate that in an Israeli democracy we have two ministers here saying if you believe in BDS and if you think it’s legitimate then you have no right in this country.

AARON MATE: Laura Alqasem eventually won, but on [inaudible] grounds. The Israeli High Court ruled that she could stay because Israel had failed to prove she is an active supporter of BDS. Lara Alqasem has since began her studies at Hebrew University in Jerusalem. I’m joined now by Lara Alqasem’s attorney, Yotam Ben-Hillel. Welcome, Yotam.

First of all, talk about the grounds upon which Israel tried to bar her, this law that allows Israel to deny entry to supporters of BDS, and the legal strategy you employed successfully to fight against what Israel did.

YOTAM BEN-HILLEL: The Israeli Ministry of Interior decided to deny Lara Qasem’s entry to Israel just because some of the material they found on the Internet, including in websites of a right-wing organization. And they said according to this Web site that that Lara was actually a current BDS activist, who was participating in an organization calling for a boycott on Israel. What we tried to show in the legal proceedings, and finally succeeded, that Lara was not an active supporter of any organization, and she wasn’t at least in the past year and a half. And even when she was part of an organization now in University of Florida her participation was very minor, and she wasn’t really a big activist. And in the end the Supreme Court accepted our line of defense.

AARON MATE: OK. So this line of defense, I think, raises a very touchy issue, because on the one hand you’re defending her right to study in a foreign country and to not be punished because of her political views. On the other hand, though, you’re not challenging the underlying law that was used here to try to deport her, which is banning people who support BDS. And you didn’t say that she had the right to support BDS. You were actually arguing that she does not support BDS, and so it was not in violation of the law. Why did you pick that strategy? And I mean, what do you say to people who actually would criticized that as saying that you’re actually in some ways legitimizing this crackdown on BDS to begin with?

YOTAM BEN-HILLEL: Well, true. This is what we did because it wasn’t possible to act within this kind of proceeding, of a woman entering, or trying to enter Israel, and staying in detention at the Ben Gurion while the proceedings are … We have to do it very quickly. And the court didn’t even let us challenge the law. So right from the beginning we decided to focus on how the Ministry of Interior, you know, implementing the law. Of course, we said right from the start that we object to this law, and we think it harms a lot of rights, including freedom of speech and other rights. But we couldn’t, in this framework of proceeding, we couldn’t challenge the law.

By the way, there is a petition challenging this law which is pending now in the Supreme Court, and will be heard, I think, in March 2019.

AARON MATE: OK. But in bringing this case, does that mean that Lara Alqasem herself is renouncing her own support for BDS? Does this mean that she’s saying that she does not support BDS, and that’s why she should be allowed to stay?

YOTAM BEN-HILLEL: Well, we tried to differentiate in this case between what people think and believe, and actions. And we tried to say- I mean, of course we object to the law, again. But the law talks about actions. And we showed that Lara is no longer taking part of an organization that promotes BDS, and therefore she should enter Israel.

AARON MATE: OK. And I think- you know, and we have seen Palestinian, especially, critics of that saying that in doing that she’s actually legitimizing the anti-BDS efforts by the Israeli state itself. But let me ask you about the conditions that she faced while she was detained. She was held for over two weeks. How was she treated?

YOTAM BEN-HILLEL: Well, in the beginning there were problems regarding her room where she was held, and they were issue of bugs in the bed. And it’s not- the conditions are really not ideal. She was held there with a lot of other women. And also she was disconnected, basically, from the outside world apart from a land line she could use from time to time. She didn’t have access to, you know, TV, Internet, books, even. And the conditions were not ideal, to say the least.

AARON MATE: And now does she face any retribution, or threats, or intimidation now that she’s been allowed into the country and has begun her studies?

Well, obviously right-wing organizations are trying to target her, and didn’t give her such a warm welcome at the university. They put some signs on the walls, Lara, you’re not welcome here, things like that. And I think they’ll still try to make her life miserable. But I hope they won’t succeed. And you know, Lara is really trying not to cooperate with them and continue with their studies.

AARON MATE: OK. And so, going forward- this is my last question- given the fact that you defended her on the basis of her rejection of BDS, I’m wondering, do you think that, going forward, that this case has helped or has hindered the fight against the underlying law, the law that allows Israel to bar people if they support BDS?

But again, in these proceedings we will expose, actually, what Israel does in order to implement the law. And things that, you know, really entering people’s minds and what they think. And in that way I think we succeeded in putting the law in perspective, to put the law only in the framework of actions. But again, the law itself will be challenged soon, and hopefully will be removed from the laws of of Israel.

AARON MATE: And certainly we’ll continue to cover it here on The Real News. Yotam Ben-Hillel, attorney for Lara Alqasem, thanks very much.