As a full week of bombing came to an end, Israeli Minister of Defense, Ehud Barak, launched a ground invasion into Gaza. The Real News Network spoke to Sameh Habeeb, a photojournalist based in Gaza City. Habeeb reports the invasion has been closing down on the Strip from all sides. The troops, which entered Gaza around 8:00 p.m. local time, have been met with fierce resistance from Palestinian militants. Israeli intelligence reports several months ago have estimated there were roughly 20,000 trained gorilla fighters in Gaza. With the intensifying violence, the humanitarian situation in Gaza is also severely deteriorating as the siege, imposed after Hamas was elected in 2006, has caused massive shortages of food, water, gasoline, and medical supplies in the battered territory.

As a full week of bombing came to an end, Israeli Minister of Defense, Ehud Barak, launched a ground invasion into Gaza. The Real News Network spoke to Sameh Habeeb, a photojournalist based in Gaza City. Habeeb reports the invasion has been closing down on the Strip from all sides. The troops, which entered Gaza around 8:00 p.m. local time, have been met with fierce resistance from Palestinian militants. Israeli intelligence reports several months ago have estimated there were roughly 20,000 trained gorilla fighters in Gaza. With the intensifying violence, the humanitarian situation in Gaza is also severely deteriorating as the siege, imposed after Hamas was elected in 2006, has caused massive shortages of food, water, gasoline, and medical supplies in the battered territory.

Stay up to date on the situation in Gaza 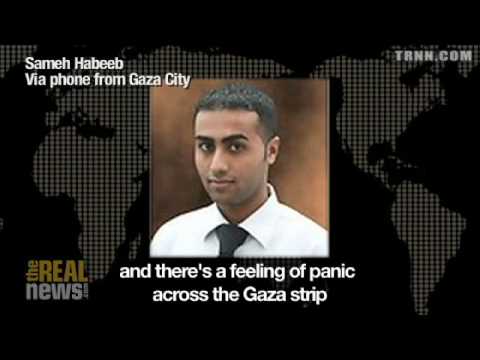 EHUD BARAK, ISRAELI MINISTER OF DEFENSE: A few hours ago, Israeli ground forces entered the Gaza Strip as part of Operation Cast Lead against the Hamas terrorists and their affiliates and infrastructure in Gaza. Our aim is to force Hamas to stop its hostile activities against Israel. We are peace seekers, we have restrained ourselves for a long time, but now is the time to do what needs to be done.

FREESTON: The Real News spoke to Sameh Habeeb, a photojournalist based in Gaza City.

SAMEH HABEEB, PHOTOJOURNALIST: The Israeli military operation, the ground operation started around 8 p.m. of Gaza time in the three main accesses in the north of Gaza. A fourth access was in Rafah city. The actions of this military operation is dramatically exasperating. Around 40 Palestinians were killed; mostly are civilians. According to the Hamas radio station here, five Israeli soldiers were killed and around 20 were injured east of Gaza City, and also the Hamas movement announced that 10 Israeli soldiers were hit by blowing them up north of Gaza. Now the Israeli military, with all its forces—the Air Force, the naval force, and the ground forces are all participating in this military operation, as very heavy bombing is taking place now, especially from the artillery shell here in the Gaza City, and the bombs could be heard across all the Gaza area, and they could see the F-16 over the ground, and also the Apaches and the drones. So it’s like a battlefield now, and it will be, like, exasperating with the recent minutes, and it will be just exasperating more and more and more with the coming few hours and the coming few days. Now the Israelis only entered the borders of Gaza Strip.

FREESTON: From what you’re telling me, it sounds like the troops are invading from the north, the south, and the east. Is that correct?

HABEEB: Yeah. East of Gaza City, and north of Gaza Strip, and south of Gaza Strip. These are three main areas. And the East of Gaza is having, like, multiple operations, two points in the east of Gaza. And, like, it’s very firing, it’s very hot now, that area, and many rockets from the artillery machines are falling down, and there’s a feeling of panic across the Gaza Strip, and no one is allowed to go outside, everyone’s committed to his home, he or she afraid from what is happening. And after that, there’s a big problem in terms of the humanitarian situation. People are not having much supplies of food. Even water is not being pumped to the houses due to the lack of power. Many basics of life are not being available, and this will for sure cause a famine with the coming few days.

FREESTON: How far have the Israeli troops penetrated into Gaza?

HABEEB: The troops is around only less than one kilometer from the borders in these areas, and the forces are not able yet—according to the Hamas and the Palestinian resistance, these forces are not able to get into the Gaza Strip, due to the serious resistance, due to the full resistance from the Palestinian faction to confront these invaders. Hamas is fighting back. Hamas is, like, sending some mortars, sending some rockets against the Israeli army in a retaliation of the victims who just fall down with the early minutes of this military ground operation. It is very hot, and the Palestinian factions, mainly Hamas and the Jihad, are in full readiness for these military operations.

FREESTON: What appear to be the targets of the ongoing aerial bombardment at this point?

HABEEB: They are bombing the shore of Gaza Strip. Many targets were bombed today. Just a few minutes ago they were bombing a sea port and some boats in Gaza Strip.

FREESTON: The news reports are saying that over 30 Hamas militants have been killed so far in the ground invasion. What are you hearing on the ground?

HABEEB: Well, this was broadcasted by the Israeli army station, but according to Hamas’ local radios here and the Hamas Web site, this is not true. They have not announced information about that. They have only said that the casualties only from the Israeli soldiers and the troops who came into Gaza.

FREESTON: What do you foresee will come next?

HABEEB: What is next? It’s so difficult to know what is next. But if the Palestinian resistance will be so weak, so the Israelis will be just occupying the Gaza Strip, Israeli within minutes and hours, but this depends on the amount of Palestinian resistance. It depends also on the Israeli army, whether the Israeli army will go on and keep in mind that there are many civilians and many population that will be hit by this military operation. It’s not only, like, to get into, like, Gaza Strip. It’s not an easy matter. The Israelis have to keep in mind that if they go on, so many civilians will be dying.

Sameh Habeeb is a freelance journalist and photographer based in Gaza City, Gaza Strip, Palestinian Territories. He worked previously as a producer for Ramattan News Agency.