Israel's governing Likud party has called for annexing the Occupied West Bank, and the Knesset has passed a law that seeks to cement control of East Jerusalem. Shir Hever says the moves are a response to growing Israeli isolation in the wake of a recent UN vote and the defiance of jailed Palestinian teen Ahed Tamimi

Israel's governing Likud party has called for annexing the Occupied West Bank, and the Knesset has passed a law that seeks to cement control of East Jerusalem. Shir Hever says the moves are a response to growing Israeli isolation in the wake of a recent UN vote and the defiance of jailed Palestinian teen Ahed Tamimi 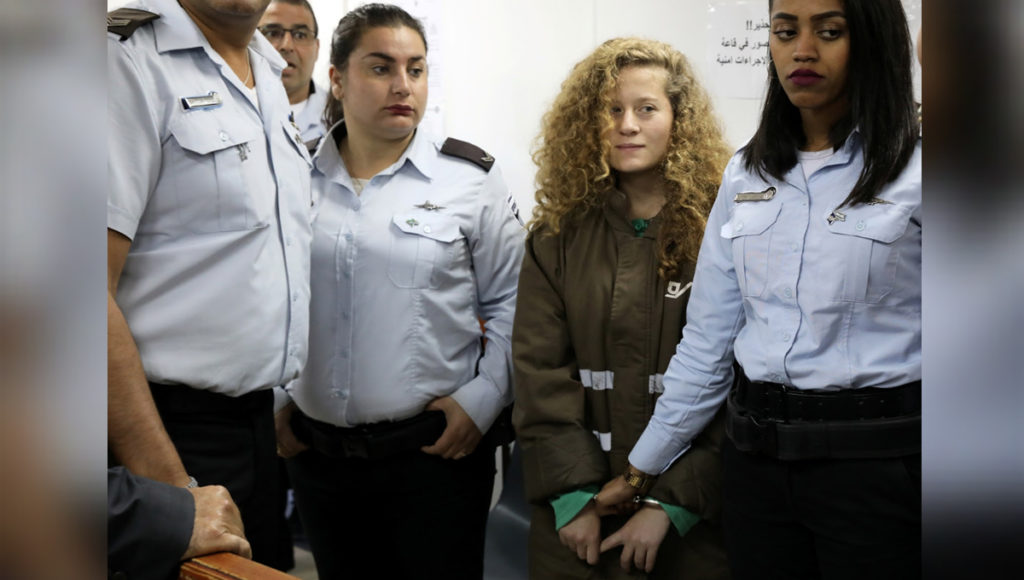 AARON MATÉ: It’s The Real News. I’m Aaron Maté. Israel has made new moves towards undermining whatever chances are left for a future independent Palestinian state. Over the weekend, the governing Likud Party passed a measure calling for Israel to annex large parts of the occupied West Bank. Meanwhile, the Israeli Knesset passed a law that makes it harder for Israel to give up control of East Jerusalem, which it occupies illegally. Palestinian President Mahmoud Abbas says this shows Israel is not interested in a just and lasting peace but is it anything new? Joining me is Shir Hever, Real News correspondent, author of the book, The Privatization of Israeli Security.

Welcome, Shir. Let’s start with this measure from Likud calling formally for Israel to annex large parts of the occupied West Bank. What does that mean?

SHIR HEVER: Well, it means that Israeli law will be applied in the West Bank which is currently under martial law. The way that the Israeli government avoids a lot of international pressure and a lot of international sanctions is by saying that the occupation of the Palestinian territories is only temporary and is only done under the law of occupation based on the Fourth Geneva Convention. And although Israel definitely violates this law, it can use this guise of temporariness in order to avoid facing consequences for a 50 year old occupation. Now, applying Israeli law to this territory means that all the illegal Israeli colonies in the West Bank would become officially part of Israel and the Israeli citizens living there would receive better treatment under the law.

But it also means that the almost three million Palestinians living in the West Bank would not actually be incorporated into Israeli law. They will not become Israeli citizens and so, that would mean a very open form of apartheid as opposed to the current form of apartheid, which has been disguised.

AARON MATÉ: Let me ask you, Shir. How is this different from long standing Likud policy? Their charter itself, which doesn’t get very much attention, not nearly as much as the Hamas charter. But the Likud Party charter, Netanyahu’s party, openly calls for the rejection of a Palestinian state in the West Bank and calls for Israel keeping Judea and Samaria as it’s called in Hebrew, the parts of it, at least that it wants.

SHIR HEVER: Yeah. Well, I think we shouldn’t also pay too much attention to the Likud charter. This is a document that not many people are familiar with or care about. I think it’s much more interesting to look at policy and to look at what they actually do. And what they actually do, and they have been doing this very consistently for these last 50 years, is reject any attempt to establish an independent Palestinian state in the occupied Palestinian territory but also not to apply Israeli law in that area. With the exception of East Jerusalem, and maybe we can talk a bit about that as well, but the majority of the West Bank and the Gaza Strip as well is under Israeli occupation but in this sort of limbo state. That was actually the policy.

Now, the center of the Likud Party is now moving a step ahead or a step forward from their declaration of 2002 in which they said they reject any additional state within that area. In other words, just leaving the status quo as it is. Now they went a step further and call on the Israeli government to annex that territory and this annexation is something new. I doubt that the Israeli government will rush to make that annexation now because I think it has a lot of consequences, a lot of legal consequences, economic consequences, that the Israeli government is not completely ready for yet. But I think they’re making this move because first of all, they feel that the international sanctions that they could expect from annexing the West Bank would not be so bad, seeing that American President Trump has made this declaration about recognizing Jerusalem as the capital of Israel. They make this statement in order to define or to interpret Trump’s declaration as a recognition de facto of Israeli occupation. And that’s. Sorry?

AARON MATÉ: No, go ahead.

SHIR HEVER: And the second thing, this is a very important symbolic declaration for the Likud Party and that’s really what’s going on here because over the last couple of days the Israeli media has been obsessively concerned with one Palestinian girl, a 16-year-old girl, Ahed Tamimi, who has assaulted Israeli soldiers with slapping them and without any weapons. But her very defiant stand against Israeli soldiers has really struck the Israeli sense of pride. You can’t be an occupier, you can’t be a colonizer when the people that you’re colonizing are rising up. And if a 16-year-old girl is not intimidated by the Israeli soldiers, then how long can this occupation really last? That’s something that caused a lot of concern and what the Israeli Likud Party needs is a kind of symbolic statement.

They’re being flanked by two sides now because there is a group of people called the New Likud Members and these are people who would certainly not be on the right wing of the Israeli political map. I’m hesitant to call them leftists but some of them maybe are mild leftists. They joined the Likud Party in order to change it from within. They become members of the party, they fill the forms and so on and this is something that raises a lot of concern within the Likud Party. They’re saying “Oh no, they’re taking over our party from within,” so they need to make this symbolic statement to say,

“No, no, we are a right wing party. We’re going to annex the occupied West Bank.”

AARON MATÉ: Right. Shir, two points: Ahed Tamimi is accused of assault of an Israeli soldier but that doesn’t mean that she actually committed assault. What she did do is slap an Israeli soldier after she herself was hit and also her cousin was shot in the face and left in a coma, her 14-year-old cousin. Her case has been striking to watch. And second, it’s interesting you mentioned that Likud, in 2002, declared that there should be no Palestinian state in between the Jordan River and the Mediterranean. It’s interesting that that 2002 is the same year that the Arab League formally gave Israel its peace offer that said if you withdraw from the occupied territories, allow for the creation of a Palestinian state, we’ll all recognize you. And then a bunch of countries, including Iran, even endorsed that initiative. So, it’s a striking contrast that both those measures occurred that year. And it speaks to who really is opposing the two-state solution. But finally, Shir, let’s talk about Jerusalem-

Ahed Tamimi, you explained the personal story and it is indeed a very troubling story about how this family on a very personal level has been targeted by the Israeli authorities. Ahed Tamimi is now charged with 12 different cases after she was arrested and also her cousin was arrested, her mother was arrested. But my point was that she’s making a very dramatic impact on Israelis. Israeli ministers, one by one, give speeches about how badly Ahed Tamimi must be punished for her defiance.

AARON MATÉ: Right, and finally, Shir, Jerusalem you mentioned, the Israeli Knesset just passing this law that makes it harder for Israel to give up East Jerusalem, if that would ever even be an option. Israel’s already pretty much annexed East Jerusalem, so why this new law now?

SHIR HEVER: The thing is that, in fact, parts of Jerusalem have already been divided by the wall of separation. And by the Jerusalem municipality denying very basic services to parts of East Jerusalem, things like sewage treatment and garbage collection, and various social services. So, people in East Jerusalem, many Palestinians continue to pay their municipal taxes in order to have the receipts to prove that they live in the city, that they’re part of the city but they receive nothing in return from the Israeli authorities because there is this attempt to push them out of the City of Jerusalem and into the West Bank. This is a de facto kind of separation and the law says that this kind of separation is illegal but it doesn’t matter because nobody’s going to change any policies because of this law.

Again, it’s a very symbolic act. And I think it’s very telling, members of the Knesset who proposed this bill, they are coming from the Jewish Home Party and they’re saying that this is the response of Israel to the General Assembly decision of the UN condemning Trump’s declaration about Jerusalem as the capital of Israel. Effectively, the vast majority of the countries of the world said, “No, we don’t recognize Jerusalem as the capital of Israel as long as the city’s half occupied.