Is Gaza Massacre a Turning Point for BDS and Anti-Occupation Activism? (3/3)

In the final part of our interview, Jewish Voice for Peace's Rebecca Vilkomerson discusses coalition building within the Palestinian solidarity movement and using tactics like Boycott, Divestment, and Sanctions (BDS) to challenge the Israeli occupation

In the final part of our interview, Jewish Voice for Peace's Rebecca Vilkomerson discusses coalition building within the Palestinian solidarity movement and using tactics like Boycott, Divestment, and Sanctions (BDS) to challenge the Israeli occupation

Israel-Gaza and the American Jewish Awakening 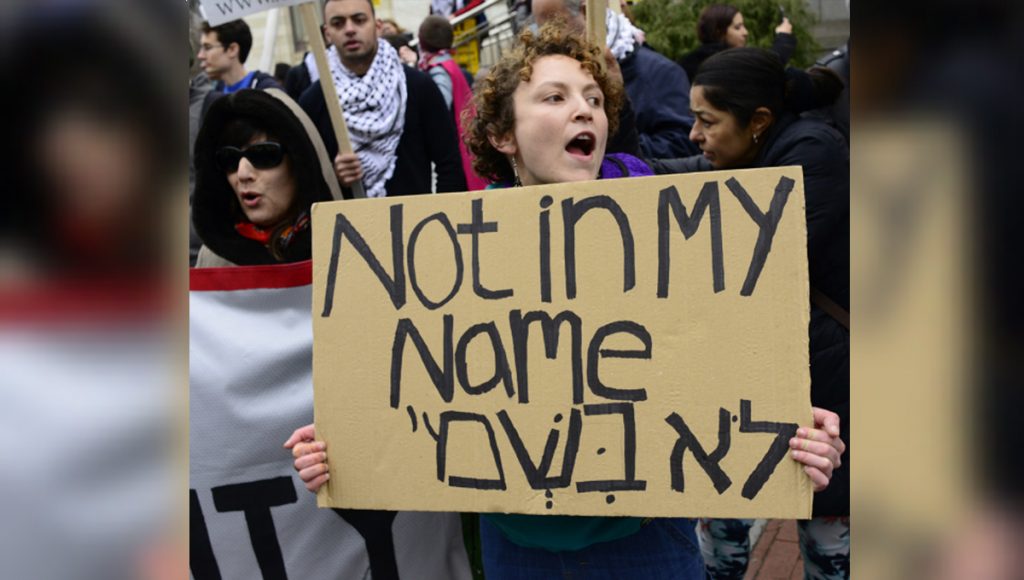 AARON MATÉ: It’s The Real News, I’m Aaron Maté, continuing with Rebecca Vilkomerson. She is executive director of Jewish Voice for Peace. When it comes to coalitions, I want to ask you about coalitions with what are called “liberal Zionists.” I personally don’t like using the term “Zionist,” because to me, it has many meanings. Zionist, to me even includes people who don’t support the idea of a Jewish state but who, like Noam Chomsky back when he was young, favored the idea of some sort of Jewish national home that that honored Jewish culture, especially in the aftermath of the Holocaust, but not at the expense of oppressing anybody, and certainly not in a way that privileges one religious group over another. So, very different than Zionism as we currently know it, but for lack of a better term, “liberal Zionists.”

I’m wondering about both the possibilities of building coalitions with them, but also the dangers. And to personalize what I’m talking about, I’m talking about some like Peter Beinart, very influential Jewish American writer, writes for The Atlantic, writes for The Forward, strongly anti-occupation, supports boycotts of occupation, of goods ban in the settlements. So, there’s something laudable there, but he doesn’t support BDS overall. And I still think- my own opinion of people like him is that they’re still a bit blinded by their attachment to Israel to fully see just how bad it is, and to fully get how even their own views are still colored by the sense of their attachment to having a Jewish state where Jews do have higher rights than other people.

And so, under that framework and things like the blockade of Gaza- for someone like Beinart, he’ll criticize the blockade of Gaza, but he’ll say that in some ways, Israel does have legitimate reasons to block some things from entering Gaza. Which on its face, to me is ridiculous because what right does Israel have to block anything from going into Gaza? Gaza is not theirs. It’s occupied territory. So, I guess I’m wondering, can alliances be built with people who are still internalizing Jewish supremacy in some ways?

REBECCA VILKOMERSON: I mean, I think one of our most important organizing principles is people’s capacity to change. And I think that’s important for all organizing, is that you have to approach people with the understanding that everyone’s changing, we’re changing, politics have evolved over time, our individual politics have evolved over time, and we want to be open to being able to be engaged in that process of change. And I think on that level, I have to say, I have a lot of admiration for Peter Beinart. I think he’s honestly grappling with the privilege that he’s grown up with. I think he’s publicly engaging in the process that he’s going through.

And I definitely feel frustrated sometimes. Sometimes it’s two steps forward, one step back. But I do think the overall processes is forward. And so, I think I want to be in conversation with people like him. I think it’s really important. I think there’s a big difference between individuals and organizations, and actually it’s not a big issue that we have to worry about. And I would say unfortunately, because the Jewish Committee has put up so many red lines- and they’re the ones who won’t work with us. You know what I mean?

So, we actually don’t even have to deal with that, because Hillel and Jewish Federations- there was just a case in Chicago where they’re saying that, for I think the local Jewish Film Festival, you basically have to say that you don’t support BDS. And so, what they’re doing is cutting off a big portion of the Jewish community, the very ones who they say they want to, you know, bring more into the Jewish community. They want to create these red lines and they won’t work with us. And so, we don’t have to make that choice. They’re already making that choice, and I think it’s a real shame.

And I think- I have a lot of conversations with people inside the Jewish community, and say like, “Look, you should be thanking us, JVP is bringing people back into Jewish community- if you’re worried about Jewish continuity, which the Jewish institutions say they are, we’re doing more for Jewish continuity and engagement with ‘Israel,’ in quotes, than a lot of other organizations are doing.” That being said, I also think it’s really important JVP doesn’t have a position right now on Zionism, although that’s an internal conversation we’re having right now. But I think it’s extremely important- a lot of JVP members identify as anti-Zionist or non-Zionist. I would say the vast majority would put themselves in one of those two categories.

And I think it’s really important to affirm anti-Zionism in particular, which is so attacked all the time, and often is coupled with, or seen as something that’s an equivalent to anti-Semitism. And ever since there’s been Zionism, there’s also been anti-Zionism inside the Jewish community. And we really want to- I want to reclaim that history and say that you can have that conversation about whether you believe in it or not, but it is an internal conversation. And there are Jewish people who are anti-Zionist and are just as Jewish and have just as much legitimacy as anybody else does. And I think that’s where we want to be having a really public conversation inside the Jewish community, about what are those red lines about politics as opposed to about identity?

REBECCA VILKOMERSON: Well, I think what’s happened in the last week, in the last six weeks throughout the time of The Great Return March, there’s been some really incredible demonstrations in the streets. JVP as one example, we’ve had sixty different demonstrations that we’ve organized or participated in around the country, just during the six-week period. So, it’s been a very elevated time of action, and very public action. I think the thing that we need to start thinking about now, because especially in the Trump era, the world moves on very quickly from one thing to the next. And I think those public demonstrations are important, but so are very long-term campaigns towards policy change.

So, I think the Boycott National Committee, which is the governing body of the Boycott Divestment Sanctions movement, has talked very much about how important it is to be talking about military embargo in the wake of this, in the wake of what happened in Gaza in this past number of weeks. And we actually have a mechanism in the United States, which is the Leahy Law, which says that- I’m trying not to laugh, because it’s ridiculous that people talk about the U.S. military in general- but there is a clause that says you can’t use U.S. military aid for human rights abuses.

And so, we want to try to invoke that law as a way to challenge, and as a form of sanction against the U.S. military. There’s also pending legislation, No Way to Treat a Child, which says the United States should not be funding having Palestinian children in jail, which is a known phenomenon. That bill, actually introduced by Representative Betty McCollum, now has I think 24 cosponsors. So that’s more than any other proactive legislation that has ever come up in Congress. And so, there are some vehicles for doing that. There’s campaigns like the Deadly Exchange campaign to end the police exchanges between the U.S. and Israel.

But I think the main point is that what we want to do is start seeding and encouraging these long-term campaigns, ones also that are local. You can look in your own community, is your police chief going on a police exchange, is your city investing in Israeli companies? There are all different kinds of campaigns you can do that are very specific and relevant to your local community. But it’s going to take more than those on the street demonstrations, which are sort of “in the moment” urgency, to really use them as tools for education to people and lead them to take action, and also bring more people into the movement.

AARON MATÉ: All right, we’ll wrap there. My guest has been Rebecca Vilkomerson. She is the executive director of Jewish Voice for Peace. Rebecca, thank you.

REBECCA VILKOMERSON: Thanks so much for having me.