Is Canada’s ‘Left’ Marching To The Beat of America’s Imperial Drum? (2/2)

Is Canada's 'Left' Marching To The Beat of America's Imperial Drum? 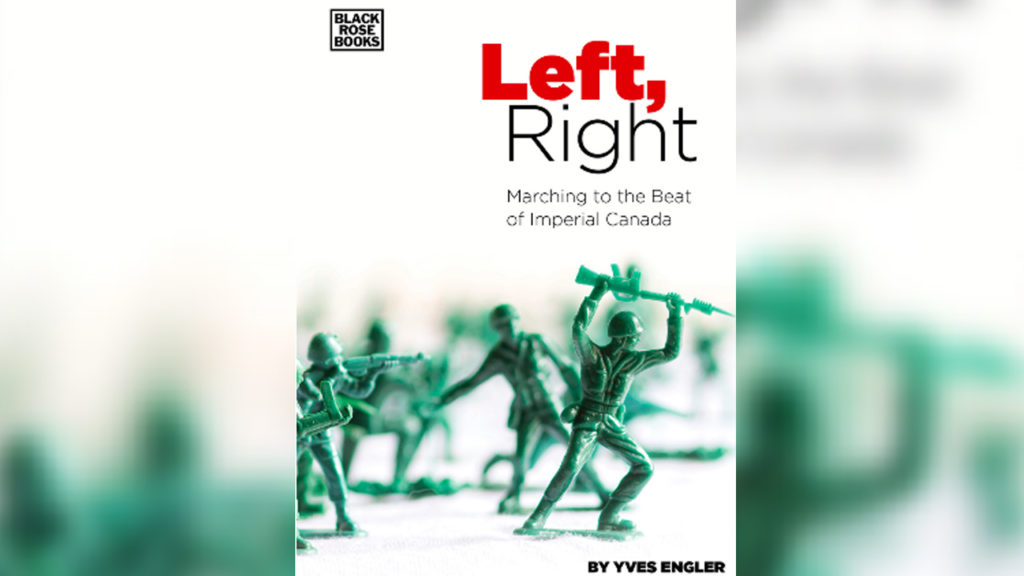 DIMITRI LASCARIS: This is Dimitri Lascaris reporting for The Real News Network from Montreal, Canada. This is Part 2 of our discussion with Canadian author and activist Yves Engler about his new book Left, Right: Marching to the Beat of Imperial Canada.

In the first part of our interview we discussed the support of the New Democratic Party, Canada’s traditionally Social Democratic Party, for imperialistic policies of the Canadian government. We’re going to explore other aspects of the NDP’s foreign policy in Part 2. Yves, who joins us today from Montreal, has published numerous books, including Canada and Africa: 300 Years of Aid and Exploitation; The Ugly Canadian: Stephen Harper’s Foreign Policy; and The Black Book of Canadian Foreign Policy. Thank you again for joining us, Yves, on The Real News.

DIMITRI LASCARIS: So, Yves, I’d like to start this part of our discussion by talking about the case of Haiti. For years, Canada has claimed to have been engaged in democracy promotion in Haiti. This is undoubtedly a belief shared by many Canadians, including some Canadians who describe themselves as progressive. In fact, I understand a recent Pew poll showed that about 94 percent of Canadians believe that our country is viewed positively in the world. What, in fact, is the reality of Canada’s purported democracy promotion in Haiti, and how do you think the people of that poverty-stricken nation view the Canadian government’s policies toward Haiti?

YVES ENGLER: The Canadian democracy motion in Haiti is overthrowing an elected governments in 2004, and supporting an installed leader who was plucked from southern Florida who hadn’t been in Haiti for 15 years, and saying that he’s the person now runs the country. I mean, Canada, at least since the early 2000s, has been aggressively hostile to democracy in Haiti, did everything they could to overthrow the elected Jean-Bertrand Aristide government and thousands of other elected officials. On February 29, 2004 there were Canadian special forces at the Port au Prince airport when U.S. Marines forced Aristide out; in Aristide’s words, kidnapped him and dumped him in the Central African Republic.

And Canada’s been basically interfering in Haitian affairs on the side of the small Haitian elite since that time. And in terms of the attitude of Haitians towards Canada, well, what we do know is there’s been many, many demonstrations in Port au Prince that have gone to the Canadian embassy, that have denounced Canada in front of the Canadian embassy. We know that the left-wing news outlets like Haiti Progres, Haiti Liberte, two weekly newspapers, have–at one point I did an estimate into the hundreds of times, over a hundred times referred to Canada as a coup force, or as an imperialist force in Haiti, have denounced Canadian policy in Haiti.

So yeah, I mean, I don’t know. I’ve never seen polling of Haitians about their attitude towards Canada. But we know that the government that was put in place by the majority poll in the country in 2002 was overthrown by Canada in 2004. We know that Canada supported a vicious installed government for more than two years. It was responsible for thousands of people being killed, mostly in Port au Prince. Now, we know that Canada has been pushing for privatization, low-wage policies in Haiti. So my presumption is is that the vast majority of certainly politically aware Haitians are critical of Canada’s role in that country.

DIMITRI LASCARIS: So let’s talk about a major iconic figure in Canadian politics, Lester Pearson. Pearson, as many know, won the Nobel Peace Prize. He’s revered by a wide swath of the Canadian public–again, including many Canadians and many establishment figures who would describe themselves as left-leaning. Your book examines the record of Lester Pearson, and you come to a very different conclusion. And in the course of examining Pearson’s record you note, among other things, that one of the world’s leading public intellectuals, Noam Chomsky, has accused Pearson of aiding and abetting war crimes. Why does Chomsky level that grave accusation at Pearson, and what, by contrast, has been the Canadian left’s attitude towards Lester Pearson?

YVES ENGLER: Well, in Left, RIght: Marching to the Beat of Imperial Canada, I have a section dealing with Linda McQuaig’s mythologizing of Lester Pearson. Lnda McQuaig is either the best or the second-best columnist, you know, corporate daily in this country. She’s one of the only voices that genuinely pushes for more egalitarian policies, somebody who actually stands up for Palestinian rights. She really is one of the best columnists that’s allowed in the–she has a monthly column in the Toronto Star.

But Linda McQuaig–and she’s just one example. I cite many others in less clear form. But Linda McQuaig goes out of her way to mythologize Lester Pearson, and to imply that Lester Pearson was a fighter for peace. She claims that he was anti-U.S. policy, against U.S. warfare in Vietnam. Well, as Chomsky points out–and he wrote a forward for a previous book of mine called Lester Pearson’s Peacekeeping: The Truth May Hurt. Pearson provided important support to the U.S. war in Vietnam. Notably, and why Chomsky levels the charge of being a war criminal, is he had Canadian members of the International Control Commission, which was supposed to be bringing peace to the region, he had them deliver U.S. bombing threats to the North Vietnamese leadership. And U.S. bombing led to a 100,000-plus people being killed. And Canada’s participation in this clear violation of international law is the main reason Chomsky levels that claim against Lester Pearson.

But more generally, Lester Pearson was a staunch supporter of the U.S. war in Vietnam. Canada sold billions of dollars of weaponry to the Americans that were used in Vietnam. Canada–there are tens of thousands of Canadians that fought with the U.S. in Vietnam, and Ottawa never brought about the Foreign Enlistment Act–because technically, Canadians are not supposed to be fighting in other countries’ militaries, and Canada never tried to block Canadians from fighting in the U.S. military. Provided all kinds of diplomatic support through the International Control Commission to the U.S. war in Vietnam.

And in fact, there is this famous speech at Temple University in 1965, which is probably the most ever cited speech of a Canadian prime minister, supposedly opposing American militarism. And at the speech, which later Linda McQuaig and others cited as a supposed antiwar speech against the U.S. war in Vietnam, Lester Pearson says really clearly, he refers to the U.S. war in Vietnam as a peacemaking endeavor. He says explicitly that he wholeheartedly supports the U.S. war in Vietnam. What he did was he called for a short-term cessation of U.S. bombing of North Vietnam. And as I’ve mentioned previously, this was a U.S. bombing in North Vietnam that Canada actually enabled, in a certain sense, by delivering these bombing threats to the U.S. leadership.

So basically what was a tactical position the U.S. having a short-term cessation of bombing North Vietnam, as part of a tactical move that big chunk of the U.S. administration supported, that was the position that Lester Pearson was making in a speech at Temple University. That’s the most ever cited speech of a Canadian prime minister, supposedly opposing U.S. militarism. It was really just a sort of divergence of opinion on how to fight the U.S. war in Vietnam. But you know, 50 years later this is mythologized into Canada, into Lester Pearson, being a sort of crusader against the U.S. war in Vietnam, even though you did find example after example after example of his speeches in the public record wholeheartedly endorsing the U.S. war in Vietnam.

And so the point of my my book Left, Right: Marching to the Beat of Imperial Canada, one of the points is to try to explain why the population, the public, is so confused about Canada’s role in the world. We believe Canada is a force for good despite it overwhelmingly supporting empire, supporting Canadian corporate interests. And one of the explanations for that is the fact that there is basically no voices. The left–even the left-wing voices that are supposed to be the critical voices are supporting the mythology, going along with the dominant narrative of Canada’s in the world. And Lester Pearson is just a stark example of that.

DIMITRI LASCARIS: Well, we’ve been speaking to Canadian author and activist Yves Engler about his new book Left, Right: Marching to the Beat of Imperial Canada. Thank you very much for coming back on The Real News.