As Iran's protests wind down, Ali Fathollah-Nejad of the Brookings Doha Center says that class divides and an authoritarian political establishment pose major barriers to change

As Iran's protests wind down, Ali Fathollah-Nejad of the Brookings Doha Center says that class divides and an authoritarian political establishment pose major barriers to change 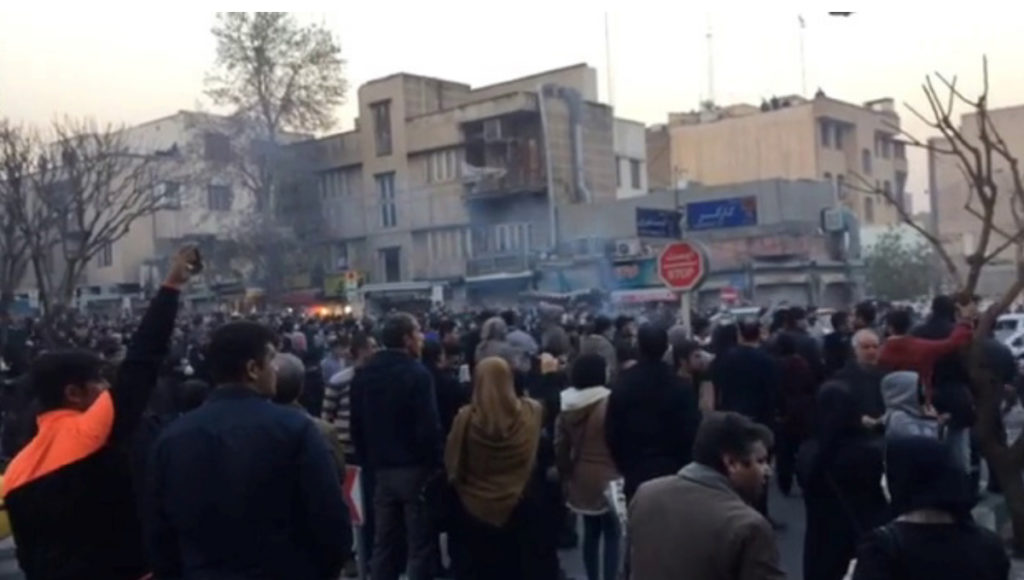 AARON MATÉ: It’s the Real News. I’m Aaron Maté. The protests that recently swept Iran have dwindled, but the grievances that fueled them have not. They began with Iran’s right wing, but quickly spread to the working class as an expression of frustration over inequality and economic stagnation. The Iran nuclear deal has not ushered in the benefits that many hoped for, and now, the deal faces new uncertainty as President Trump faces a Friday deadline on whether or not to continue waiving sanctions as part of it. Ali Fathollah-Nejad is a visiting fellow at the Brookings Doha Center. His latest piece for Al Jazeera is called, “Causes Behind Iran’s Protests: A Preliminary Account.”

Ali, welcome. Let’s start with where the protests are at today. Is it fair to say that they have pretty much died down?

A. FATHOLLAH NEJAD: I mean, they haven’t disappeared, but it’s clear that in comparison to last week, they have waned, and this is in direct correlation with increasing state’s repression. What we see these days is some protests taking place in front of prisons where protesters were jailed, plus at funerals where protesters were killed, and you see still some spontaneous protests all over the country, but in terms of intensity, it has decreased.

AARON MATÉ: What do you think is important for people to know about the protests? You point out in your piece for Al Jazeera that they began not last week, but well before.

A. FATHOLLAH NEJAD: Well, I point out that this comes against the backdrop of a wave of protests that we’ve seen since two years ago, actually, so a lot of social protests by working-class people, by teachers, by pensioners, but also by students. So, this is not new, having protests. What is new is that what we had on December 28th is a kind of uprising that happened all over the place in over 70 cities and towns, so the intensity is quite new. What I also point out that this comes against the backdrop of both structural and contingent causes. The contingent causes, I’ve tried to lay out when it comes to the wave of protests; the structural causes being the social misery in Iran, where about half the population lives around the poverty line, plus the fact that you have a strong authoritarian system with very small spaces for legal political activism.

AARON MATÉ: Right. In terms of the neoliberal policies that were the subject of a large part of the protesters’ grievances, can you explain what they are? Also, is the Iranian president, Hassan Rouhani, is he in a position to meet any of their demands, and do you expect that to happen?

A. FATHOLLAH NEJAD: I mean, what we had since Rouhani assumed the presidency in Iran in 2013, after we had a decade of demonizing Iran, in fact, under the Ahmadinejad era, we’ve then turned into a kind of glorifying Iran, although both narratives are quite inadequate to represent the complexity within the Islamic Republic, but what has happened since Rouhani assumed office — and you can see that from a lot of analyses that have been published since then — his agenda was quite misrepresented. His economic political views are quite neoliberal on one hand, but plus authoritarian. After all, President Rouhani comes from the security establishment. He has held the most important positions in the security apparatus of the Islamic Republic of Iran.

For example, before assuming the presidency in 2013, he had served as the Supreme Leader of Iran’s representative at the Supreme National Security Council for over two decades. His entire doctrine is security-led, so from this security-led doctrine, he has been making the conclusion that for Iran, in order to avoid some kind of socioeconomic revolt, the economic situation has to be improved. For that to happen, the nuclear deal has to be struck with the West. Sanctions have to be removed, but the problem is that the neoliberal economic model that he’s a proponent of is quite inadequate to address the deep socioeconomic problems that Iran faces. Because of that, from the very inception, I’ve been warning that this is not going to be in a good direction, because as we have seen in other countries other than Iran, neoliberal economic policies are not adequate to tackle the social question.

AARON MATÉ: Say he wanted to meet the protesters’ demands, and say he even wanted to move away from neoliberal policies. Is he in a position to do so, or is the ruling clerical regime, do you think they’re going to be responsive to the protester’s demands that were expressed last week?

A. FATHOLLAH NEJAD: Well, I mean, the underlying assumption of your question is that there is a clear divide between the president on the one hand and also the reformists that are supporting him, and the more conservative factions of the ruling elite in Iran, whereas actually, the commonalities are much stronger. Both of them are interested in the survival of the regime because they both do benefit a lot from the Islamic Republic because economic and political power is very much monopolized by all factions of this exclusively Islamist ruling elite. As I’ve pointed out, Rouhani himself first of all is a centrist, and secondly, he has been very much working with more conservative forces in the Islamic Republic of Iran, so it’s hard to take the suggestion that well, if he wanted to, would he be able to do that?

The first point is that actually, well, his neoliberal economic policies and his stances against labor rights, against a decent minimum wage, make it really hard to address the concerns of the protesters, the socioeconomic ones. As to the political ones, that have been quite critical vis-à-vis all factions of the ruling elite, it’s also hard to see whether Rouhani is going to be willing and able to address those issues because up until now, also on the political front, we didn’t see any kind of improvements when it comes to a lot of political freedoms. Also, in terms of the human rights situation, actually, the situation has worsened after the nuclear deal. Iran, over the last few years, has been the country with the highest execution rate in the world, so it is really hard to see how the regime is or the government is going to respond to those issues, but it seems it has to.

A. FATHOLLAH NEJAD: Execution per capita.

AARON MATÉ: I’m surprised by that.

A. FATHOLLAH NEJAD: I’m also surprised, but those are the facts.

AARON MATÉ: Given that I take it you don’t expect any reforms to come out of the protests, what then do you expect to happen? Also, what role do you see for those who took to the streets in 2009 as part of the Green Movement who, from my vantage point, did not take part in the protests last week? Do they have motivations, possibly, to join with working-class Iranians in future protests, assuming that nothing changes?

There was no single statement put out by the leaders of the Green Movement back then that was trying to forge an alliance across different sections of society, something that had happened in the initial phases of the Arab Spring in Tunisia as well as in Egypt. There was repression against the Green Movement, but repression alone, if you’ll again compare it to the initial phases of the Arab Spring, cannot explain why the movement failed. But its political demands were very much a reflection of the reformist standpoint. Now, we come to today because as you see from the reactions of the reformists, they didn’t want to join the uprising. They were quiet. They didn’t say much. Some of the leading figures actually used the same derogatory terms vis-à-vis the protesters as the right-wing conservative faction of the Islamic Republic. So the problem remains that … The reformists’ political weakness, historically speaking, also has been that they have been focusing on some political freedoms, which is good, but they have been neglecting the concerns of a large part of Iranian society that is not part of the urban middle class and has a lot of concerns when it comes to socioeconomic grievances.

The reformists have not been able to address those issues, not least because they are part and parcel of the ruling establishments themselves, so what we see now is that people — and this is also transported by the slogans we’re hearing — are actually fed up with both sections of the elite, the reformists as well as the Principalists, the right-wing conservatives. I mean, the reformists have to really rethink their political agenda and hopefully, this will trigger some kind of a profound rethinking of their political ideas and ideology and strategies, but I’m not very optimistic on that front.

A. FATHOLLAH NEJAD: Thank you.

Ali Fathollah-Nejad is a political scientist and currently a Visiting Fellow at the Brookings Doha Center. Ali is also the Iran expert of the German Council on Foreign Relations (DGAP) and an Associate with the Iran Project at the Harvard Kennedy School’s Belfer Center. He holds a Ph.D. in International Relations from the Department of…