Paul Jay says anti-Semitism is deeply ingrained in Western culture​, and can easily become more widespread during economic crisis - From a live recording on October 29th, 2018

Paul Jay says anti-Semitism is deeply ingrained in Western culture​, and can easily become more widespread during economic crisis - From a live recording on October 29th, 2018 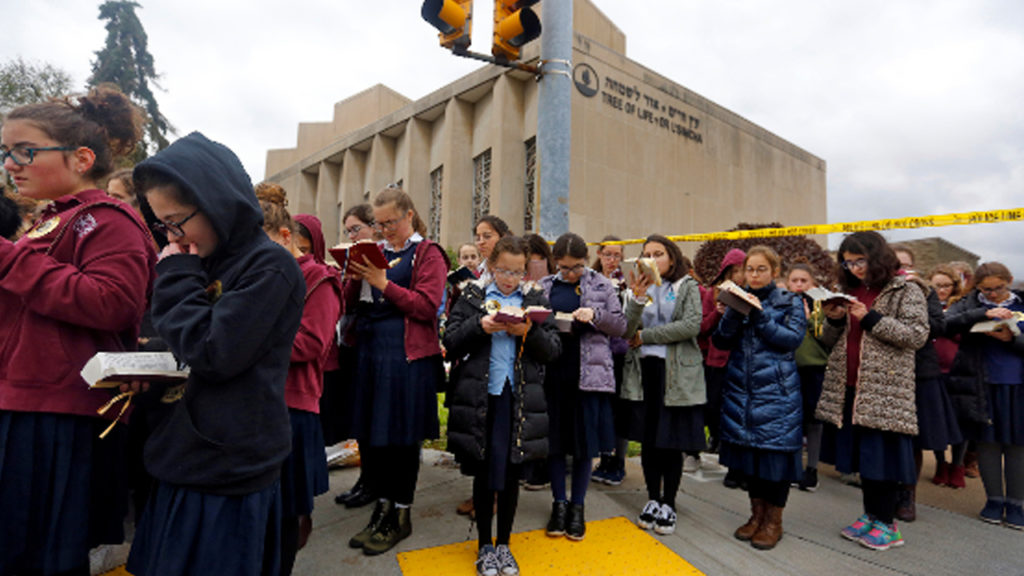 BEN NORTON: Robert Bowers, this is the Nazi who carried out this massacre in Pittsburgh, on social media he regularly talked about immigration, how it was supposedly destroying the U.S. Specifically, he echoed this popular alt-right claim of so-called white genocide. No white people are actually being killed. What they’re saying is that the percentage, the overall percentage of white people in the U.S. is declining. And of course, they blame immigration for that.

But what’s interesting about this is that they don’t- these far-right types don’t address the root causes of immigration. And again, as you mentioned, we are seeing a kind of scapegoating. So this shooter blames Jewish Americans, claiming this is a plot to decrease the percentage of the white population through immigration. But actually what he’s not acknowledging is that U.S. destabilization of Central and Latin America has really pushed a lot of this immigration. The most recent migrant caravan we’ve seen has been coming largely from Honduras, where in 2009 the U.S. backed a military coup against a left-wing president and installed a right-wing military junta that still stole the election, most recently, and killed protesters; that is still repressing the population. There is no discussion of the wars in Central America, that the U.S. backed Contras and death squads, or the relations between the Mexican state and drug cartels that are pushing a lot of violence.

These systemic issues are not dealt with. The role of our government and governments in Latin America, in fueling this immigration is not discussed, and instead there are convenient scapegoats, and Jews are blamed, or Democrats are blamed. Can you respond to that scapegoating, as well?

PAUL JAY: Yeah. Well, you’ve made the point about Latin America, which I agree with. But I want to say something as a North American Jew to North American Jews. You cannot live off the bounty of such superexploitation and not think that this is going to come back to haunt you.

You know, this is fundamentally a white Christian society in terms of its culture, its power structure. Non-Christians are still more or less outsiders, including Jews, Muslims, and other other non-Christians. And Jews particularly- let’s acknowledge the fact that there are several thousand years of hatred of Jews baked into this western culture. This is a real thing, this deep anti-Semitism, and it’s a real thing that when the far right emerges- and yes, this kind of mainstream far right, if you want, the kind of leadership of the Republican Party and Trumpism, yes, they ally with this far right, this far, fascist right.

Well, what happened in Pittsburgh, Jews need to be aware, and so do other non-Christians, non-white Christians, be aware, but Jews have a special role in all of this, is that Jews can be the target again. This baked-in anti-Semitism is real. But the defense of it is the fight against the inequality against- I mean, how did Hitler and Naziism arise in Germany? It wasn’t because there was good times economically. It’s because they’re in a deep depression, and Jews are a good scapegoat. Jews are a good, easy way to blame. And yes, there is a tradition amongst some Jews- less, you know, to some extent less than used to be, I think, of promoting what in this society are called more liberal values, like being more sympathetic to immigration and things like that. I’m not so sure that isn’t true amongst many other peoples as well. But yeah, amongst-

BEN NORTON: Well, it’s true in general among minority groups; ethnic and religious minority groups. Because of course, they are the victims of bigotry and prejudice, and makes sense that people would be supportive of, you know, these more liberal social policies. It’s not unique to just Jews. It’s true for Latino Americans and black Americans and others.

PAUL JAY: Yeah, no doubt. And maybe even more so these days amongst Latino and African Americans, because there are, certainly a large section of the Jewish population has done quite well over the last few decades. But as I say, this anti-Semitism is very baked into the culture. You know, it’s only a few years ago that overt anti-Semitism was as overt as racism against African-Americans. We’re in Baltimore, and there used to be signs outside some of the suburbs here. It was “No niggers, no Jews, no dogs.” There used to be a section of the newspaper The Baltimore Sun as recently as 1969 with a section for whites, a section for Jews- I’m talking about classified real estate ads- a section for ads for whites, a section of ads for Jews, and no section for blacks.

Jews that think that they can cash in and merge with and be part of the elites and the exploitation that takes place, Jews that think that to support the Israeli occupation of Palestinian lands and the crimes that have been committed by the Israeli state against Palestinians in the West Bank and Gaza, to welcome Netanyahu when he comes to the United States- remember Congress, how they stood up for him.

If Jews join the exploiters, it will come back to haunt you. Haunt us. Because we’re not- Jews will never really be, same way African-Americans, same way Latinos, they will never really be in the club. But it’s an easy target to point at Jews. So this issue of fighting anti-Semitism cannot be disconnected from fighting this whole system of exploitation. This system that has the United States as the hegemon of the world, if people don’t see, the way to fight this growing fascism is real democracy, both economic and political. A broad front of all the people. And we can’t just get upset, you know, as Jews, when it’s Jews that get killed. Because this type of violence is affecting, you know, all kinds of, all peoples.

BEN NORTON: So I wonder, Paul, let’s talk about how there is an attempt by the Republicans and by members of the Israeli government, specifically Naftali Bennett, who is a far-right Israeli minister who has actually boasted about killing Arabs, he was sent over here to exploit the situation politically.

And in fact, this has led to some public statements of outrage by some prominent Jewish Americans who were involved in the Jewish community; specifically David Simon, who is producer of The Wire, and is known for his involvement in progressive politics. He said that this blood of the American Jewish community is, quote, “on Netanyahu’s hands.” He said very explicitly that the Israeli prime minister bears partial responsibility. And what he’s referencing is that Israeli Prime Minister Netanyahu is very closely allied to Donald Trump. Members of the right-wing Likud party in Israel, in fact, partially blame Jewish Americans for being progressive, or at least progressive Jewish Americans, and imply that they partially bear responsibility. And even Israel’s ambassador to the United States Ron Dermer went on MSNBC, and he claimed that both sides are responsible, supposedly, for inciting anti-Semitism; essentially making a false equivalence between progressives who support Palestinian rights- and he referenced Jeremy Corbyn, this is the leader of the Labour Party in the UK. The Israeli ambassador to the U.S. drew a false equivalence between progressives and antiracists like Jeremy Corbyn and Nazis, avowed Nazis like the man who carried out this massacre in the synagogue.

So there’s a lot to address there, but I’m wondering if you can talk about how this is being politically exploited by people who themselves not only have supported crimes against Palestinians, but actually are rehashing anti-Semitic tropes in defense of Israel in response to this attack.

PAUL JAY: Well, these are really complex issues, and you’ve raised a lot of different questions there. Not all criticism of Israel is anti-Semitic, but some is. And one of the things that the Israeli occupation of Palestine and the policies of war against the people of Gaza, one of the things it’s done, it’s allowed the anti- the, what is really anti-Semitic in its roots to dress itself up as being for justice for Palestine I think that’s a real minority. The vast majority of critique of Israel is not anti-Semitic. It doesn’t come from an anti-Semitic place, it comes from what it says it is. It’s justice for Palestine. But the crimes that Israel commits does allow anti-Semites, the people that, you know, real haters of Jews, to dress themselves up and look, you know, pro-Palestinian and such.

And you can see- I know just on The Real News when we do stories that are critical of Israeli attacks on Gaza, or some of this new kind of racist legislation that’s in Israel where you’re going to have to have, you sort of support a Jewish state or you can’t be a legitimate Israeli, and so on. In the comment sections you can see mixed in with comments that, you know, I agree with the critique or maybe disagree with the critique, you can see really racist comments that are virulently anti-Semitic and filled with hatred of Jews. But for the Jewish community in North America to embrace these crimes that Israel commits- and I’m saying not the whole community. The section that does. Because there’s lots of Jewish activists that oppose this. But those that do, they feed this anti-Semitism.

And again, it’s the, sort of the same point I made just before. You know, North American Jews cannot side with the exploiters here, and not think that this will come back to bite them when they become the easy way for the elites to say, oh, look over here at the Jews, because they’re the ones that have really done it to you.