India’s Capital of Delhi Has the World’s Worst Air Pollution – Why? 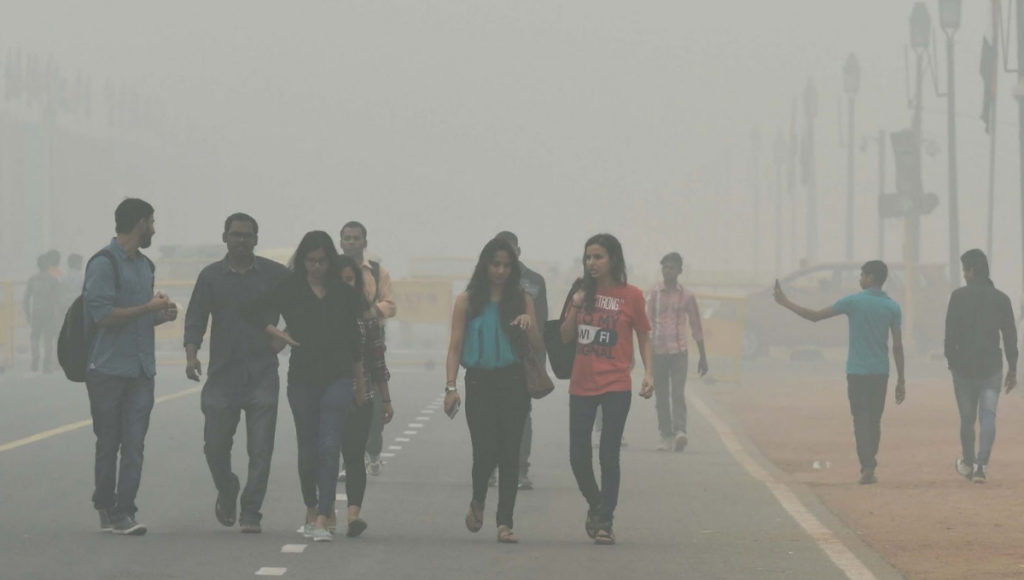 D. LASCARIS: This is Dimitri Lascaris for The Real News Network. On November 8th, the Indian capital city of Delhi gained the dubious distinction of becoming the most polluted city on the planet. The air quality is now so bad that it’s equivalent to smoking 50 cigarettes a day. So how did Delhi and India become so polluted, and what can be done about this severe public health problem?

Joining us to discuss this is Shouvik Chakraborty. Shouvik is currently a research fellow at the Political Economy Research Institute, UMass Amherst. He received his PhD from the Center for Economic Studies and Planning at JNU in New Delhi. He’s published a variety of progressive economic articles, especially in the areas of development banking, international trade, food security, and energy and the environment. Shouvik’s current research focus is on the generation of jobs through investment in clean, renewable energy and developing an egalitarian green growth program. Thank you very much for joining us today, Shouvik.

S. CHAKRABORTY: Thank you for having me.

D. LASCARIS: Let’s start, Shouvik, by examining the main sources of air pollution in India. What are they?

S. CHAKRABORTY: The main pollutants are the various particulate matters, sulfur oxides, NOx, and other pollutants which are mainly emitted from the fossil fuels. It’s like a burning of fuel for the electricity, for running cars, and as you know that Delhi have a very high car-to-population ratio. Burning of fossil fuels is the main cause of pollution in Delhi and other major cities in India.

D. LASCARIS: I understand there’s also a practice in some of the surrounding areas around Delhi agricultural areas of burning crops. Is that a significant source of pollution in Delhi?

S. CHAKRABORTY: See, according to the statistics, around 75% of the air pollution is due to the fossil fuels. Most of it is due to the burning of fuels due to the production, generation of electricity and around transportation needs. Now, of course there is a pollution due to those agricultural burnings and other non-energy sources but the majority problem lies with the usage of fossil fuels in the economy.

D. LASCARIS: Give us a sense of what life is like for the residents of Delhi in these extraordinarily polluted conditions. Practically speaking, what limitations does this level of air pollution impose on their daily lives?

S. CHAKRABORTY: This has a huge impact, especially if you look at some of the studies which has come up, like the Lancet Commission, it says that 1.9 billion people in India are affected by this air pollution, very heavily affected. In fact, the Indian Journal of Pediatrics has come up with a study which shows that around these heavily polluted cities like Delhi, the children have 10% smaller lungs than the children compared to the United States. So the life has become very difficult there during that period. I myself was in Delhi and it was very difficult. People have to wear masks during those hazardous conditions just to protect themselves from this heavy polluted air. Day-to-day life has, during those times, become very difficult.

D. LASCARIS: Now, there’s a lot of focus, and rightly so, on Delhi being the most polluted city, but I understand that the problem of severe air pollution is not one that’s unique to Delhi in India. Could you talk to us more generally about the air quality outside of the capital?

S. CHAKRABORTY: Oh, even outside, the air quality is quite bad. If you’ll look at some [inaudible 00:04:15] news, The Telegraph UK, they identified some of the major polluted cities across the world, of which many of the other prominent cities focus like Agra, Gwalior, Ludhiana, Amritsar, and many other metropolitan cities.

The problem, like I was telling you, is the huge dependence on fossil fuels, which actually is polluting … It’s not only a cause for the pollution but also, as we know, a huge cost for the climate change, the greenhouse gas, carbon dioxide emissions. Like I was telling you, 75% of this carbon dioxide emissions comes from the burning of the fossil fuels. Even in other cities since they are heavily dependent, and in general in India, there’s a huge reliance on the fossil fuels like coal, which is very dirty in nature, the coal itself, and also other fossil fuels like diesel, petroleum, which is popularly known as gas in the US. The dependence on these things have been very much responsible for even polluting the other cities in India.

D. LASCARIS: What exactly is the national government … What are the state, municipal governments doing in India to deal with this quite severe public health problem?

S. CHAKRABORTY: To be very honest with you, I don’t think this has still become a very important issue in India, very sadly. It has not drawn the attention of the policymakers that it’s supposed to do. Now, that’s why many of us are trying to argue to the government that the time is running out. This is literally a public health emergency, like we have argued in our article also. We are trying to put this issue in the forefront of the policymakers so that they become concerned about this health emergency and start looking at this issues more carefully. This would definitely not only help in controlling the pollution but also would help in protecting the planet and even, for that matter, protecting the India from the impacts of the climate change it is vulnerable to.

S. CHAKRABORTY: At present, the Indian government spends merely around 0.6% of its GDP on this clean, renewable energy. But as my research along with Professor Robert Pollin and Rohit Azad, who is from JNU New Delhi, has shown that this is not enough. The government needs to spend almost like 1.5% more of that 0.6% which is existing over so that this energy transformation can be done.

What we are suggesting is that this money, because there might be a fiscal concern about this, that this money can be generated through taxing the very souls which is polluting the atmosphere, which is the fossil fuels. We can collect what is popularly known in the literature as a carbon tax and spend that on the people’s improvement of the air quality and providing people with free energy and public transportation. Our study shows that the government is not doing enough. It has to do much more than required, and it needs to come back to the center stage of our policymakers so that they spend more on this remodeling of the energy mix.

D. LASCARIS: Finally, how important is India’s transition to clean, renewable energy to the overall battle against the climate crisis?

S. CHAKRABORTY: Definitely. Like I was telling you, because greenhouse gas emission is a major … India today contributes, in totality, around 2.2 billion metric tons of carbon dioxide into the atmosphere. In per capita terms, we are very low but if we would look at in totality, it is at a very high level. Honestly speaking, we don’t have to do this. We can remodel the energy needs in favor of clean, renewable energy like solar, geothermal, small-scale hydro, and other wind. India has a lot of potential for it, and also India’s energy efficiency levels can be improved by investing in building retrofits then improving the industrial energy efficiency, public transportation investments. So there is a huge scope for improvement in India even in terms of those usage of energy, to improving the energy efficiency, and at the same time, remodeling the energy.

Just to add to this point, one of the major concerns in the Indian economy is the huge inequality in the usage of energy. The cities, like I was telling you, have been heavily polluted. This is mainly because the cities are so much dependent on fossil fuel, whereas in the rural areas, people don’t even have access to energy. Like 30% of rural India still does not have any access to energy. 35% of all over India has access to cleaner fuels and technologies. So there is a lot of scope for improvement in rural India, providing people with electricity and energy, which is not being done at current.

D. LASCARIS: This has been Dimitri Lascaris speaking to Shouvik Chakraborty, a research fellow at the Political Economy Research Institute at UMass Amherst about a growing and severe problem of air pollution in India. Thank you very much for joining us today, Shouvik.

S. CHAKRABORTY: Thank you for having me.

D. LASCARIS: This is Dimitri Lascaris for The Real News Network.