Former Police Chief Kelvin Sewell appeals his misconduct conviction, arguing that he was prosecuted in retaliation for a discrimination complaint. Maryland Court of Special Appeals judges press a state prosecutor for answers

Former Police Chief Kelvin Sewell appeals his misconduct conviction, arguing that he was prosecuted in retaliation for a discrimination complaint. Maryland Court of Special Appeals judges press a state prosecutor for answers 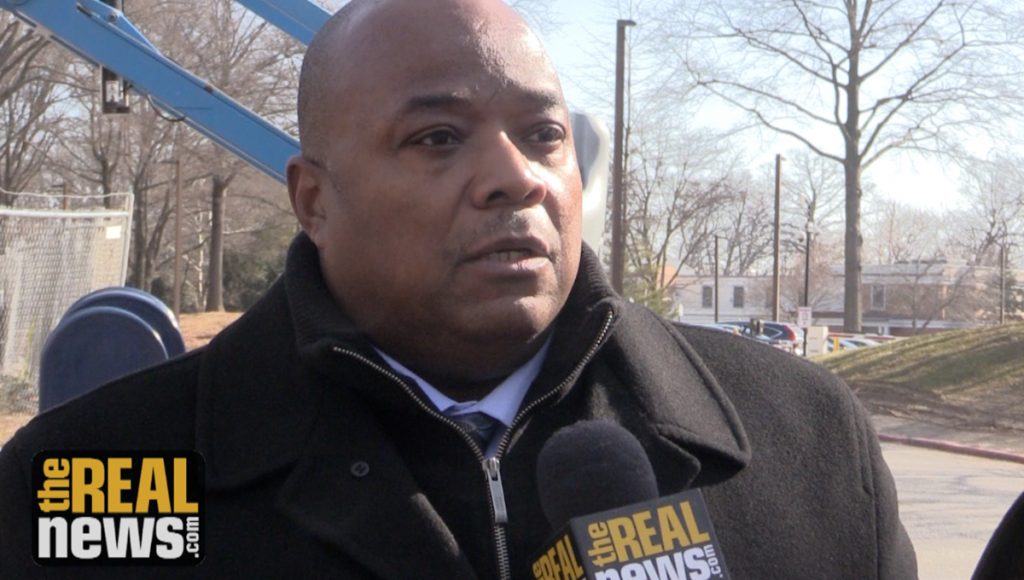 TAYA GRAHAM: This is Taya Graham reporting for The Real News Network in Annapolis, Maryland. We’re here at the Special Court of Appeals, waiting to hear about Kelvin Sewell, who is the first black police chief of Pocomoke, Maryland. Kelvin Sewell was indicted for misconduct in office and he’s appealing it right now, to see if he’ll be able to be a police officer again.

The controversy over Sewell’s firing made national news, partly because the case was viewed as a litmus test on race, because support for the former Baltimore City homicide detective split mostly along racial lines.

VANESSA JONES: I think what has motivated the community so much is just in the short time that Chief Sewell has been terminated, we have already seen crime start to rise.

TAYA GRAHAM: During his tenure as Chief for the small town on Maryland’s lower eastern shore, crime decreased dramatically. But more importantly, his community-first approach transformed the city that is half African-American and half white.

D. SCHOOLFIELD: Chief Sewell has been a big inspiration, blessing to this neighborhood. He’s cleaned up a whole lot of noise, of people hanging out in the streets. He’s just been one great aspect to the community.

TAYA GRAHAM: But in 2015, he was fired by the Pocomoke city council without explanation.

TAYA GRAHAM: His attorneys alleged in a lawsuit and subsequent EEOC complaints, Sewell was terminated for refusing to fire two black officers who alleged the Worcester County Drug Task Force engaged in racially hostile behavior. But Pocomoke officials insisted he had done something wrong.

ERNIE CROFOOT: Being popular is important, but it’s not the only criterion for being a police chief, and not being able to go into reasons, but I leave it to your conjectures, what are the possible things that someone who’s well liked can be terminated for?

TAYA GRAHAM: Shortly after Sewell’s EEOC complaints were sustained against Pocomoke and the Worcester State’s Attorney, state prosecutor Emmet Davitt indicted Sewell for not charging a driver who hit two parked cars in 2014. Davitt alleged Sewell let the driver go because they were both black Masons, an argument Worcester County jury found persuasive when they convicted him of misconduct in 2016. But during the trial, emails were uncovered that showed the Worcester County State’s Attorney assisted Davitt’s office raising the specter the prosecution was in retaliation for Sewell’s discrimination complaints.

But the recent revelations about the brazen behavior of the Gun Trace Task Force, an elite unit of Baltimore officers accused of stealing overtime, robbing residents and dealing drugs has also raised questions. Why did Davitt pursue Sewell while widespread corruption was occurring in Baltimore that he ignored? Even though Davitt, a state prosecutor has jurisdiction.

Which is why today Maryland’s Court of Special Appeals heard arguments from both sides to have Sewell’s conviction overturned. And during those arguments, the judges expressed skepticism. First with the central theory of Davitt’s case, that because both Sewell and the driver, Doug Matthews, were black Masons, Sewell’s decision not to charge him was corrupt.

“Is there any evidence of prior relationship between Sewell and Matthews?” the judges asked. Assistant State Prosecutor, Kelly Madigan answered, “No.” The judges seemed particularly concerned about coordination between Davitt and the Worcester State’s Attorney’s Office who had sustained an EEOC complaint filed by Sewell.

“There was communication between your office and their office?” the judges asked. “Yes, Worcester County gave different tips.” Madigan replied. A revelation that led judges to grill the state. “I’m just trying to understand,” Judge Andrea Leahy asked. “First, Chief Sewell was fired. Then, he files an EEOC complaint. Then he was terminated and then he filed the lawsuit and then he was charged. All these things occurred first, correct?” “Yes.”

Outside the courthouse, Davitt struck back arguing indeed the black Mason connection was enough to prove intent.

STEPHEN JANIS: You know, one of the things that was interesting where the legal issues was raised was corrupt intent. Do you think the Mason membership was enough to prove corrupt intent?

EMMET DAVITT: Just thinking of that alone with all the actions that were taken that night, that was the evidence the jury considered.

STEPHEN JANIS: Rather than the process.

STEPHEN JANIS: Right, so you think the fact that the corrupt intent isn’t a part of this?

STEPHEN JANIS: So, the fact that the was a membership in the Mason’s says he had something to-

EMMET DAVITT: That was part of his association.

STEPHEN JANIS: Right. Now, what do you think about allegations? The emails were revealed that showed your office communicated with…office.

EMMET DAVITT: Exactly, and voluntarily turned every communication over without being asked. The court reviewed all those communications and saw there was nothing relevant to this case.

STEPHEN JANIS: But even the…

EMMET DAVITT: When you’re asked for different accidents records there.

TAYA GRAHAM: Finally, he took aim at another officer who filed an EEOC complaint against Worcester County who he also prosecuted and convicted, Lieutenant Lionel Green.

EMMET DAVITT: But as we also made very clear and we did it in the hearings and you were there was that we made this decision to charge him is when his co-defendant and co-plaintiff in the civil suit came out and said he had been drinking, he told Chief Sewell he had been drinking and they discussed not charging him. You’ve never written that once, you’ve never talked about that but that’s the facts of it. Everybody knows that. Counsel on all sides knows that. That’s why we charged him.

STEPHEN JANIS: But that was notes they couldn’t find, right? There were notes about the conversation with him that came up during the interview at the police station. Just so I get it right, where is that?

EMMET DAVITT: It was a two-hour interview between investigators from the State Prosecutor’s Office and Lieutenant Green.

“Mr. Davitt’s recollection of the evidence presented at Lieutenant Green’s trial clearly differs from ours. It is misleading to say the least to suggest that Lieutenant Green spent two hours discussing the incident in question with investigators from Mr. Davitt’s office. It is also incorrect to say that the evidence regarding the driver’s impairment was never contested at trial.

As Mr. Davitt knows, the testimony at trial was that Lieutenant Green told investigators that he had told Chief Sewell that the driver may have had one or two drinks but that the first officer to make contact with the driver testified unequivocally and consistent with his pre-trial statements to OSP investigators that the incident did not appear to be drug or alcohol related.”

One other criticisms that Davitt’s investigation was wide ranging was echoed by the man driving the car that night, Doug Matthews. Matthews says he was surprised investigators visited his house years after the incident occurred.

DOUG MATTHEWS: I went out and they was basically trying to grill me to find out what happened that particular night and I tried to explain to them at that point in time they asked me, did I knew him, how long have I known him. I explained to them and also he is in the lodge that I’m in, now, right now but before that he was not in the lodge then at that time and I had nothing to do with him coming into the lodge. And I told them I didn’t even really know him because when I look back, this incident was over two years ago.

So, I was thinking or under the impression that and after talking with the guys I assumed that’s what it was about. They were trying to dig up whatever they can do to compile the investigation to try to negate what’s been filed up against the police department and several other agencies in this community.

But he didn’t do anything. I mean, most I can remember what he said was, “Are you all right?” and that was it. I think they’re targeting the African community individuals that was on the police force and I’m hoping in the long run that this will all come out when the court date comes up.

TAYA GRAHAM: Sewell’s lawyers declined to comment after the hearing.

STEPHEN JANIS: From a general impression, how do you think it went there today?

SPEAKER: We really can’t comment on the merits of it.

TAYA GRAHAM: But Sewell’s supporter, Gabe Purnell says he is hopeful that the court will overturn the conviction and bring some semblance of justice to the Eastern Shore.

GABE PURNELL: I really feel it was retaliation because if they never had filed suit with the EEOC this case would never even come to trial. It wouldn’t been no case. Nothing.

STEPHEN JANIS: What does that say about our justice system?

GABE PURNELL: It says that sometimes our justice system is a bit corrupt and we need to be mindful of that all the time because justice is not always just.