Taking the Black Struggle to the United Nations

The Working Group of Experts on People of African Descent were in Washington, DC last week for a town hall convened by Pan-African Community Action (PACA). We caught up with PACA's Netfa Freeman and Garrett Harris to hear more about the working group's findings and the goals of the organizers.

The Working Group of Experts on People of African Descent were in Washington, DC last week for a town hall convened by Pan-African Community Action (PACA). We caught up with PACA's Netfa Freeman and Garrett Harris to hear more about the working group's findings and the goals of the organizers. 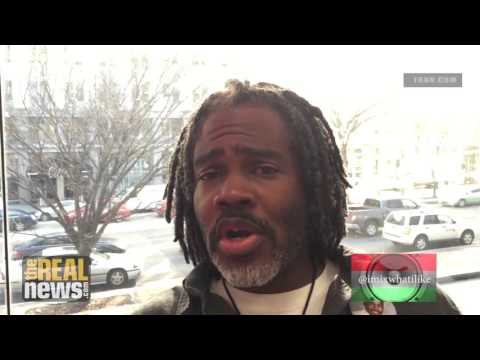 NETFA FREEMAN: PACA stands for the Pan-African–stands for Pan-African Community Action. And the United Nations Working Group of Experts on People of African Descent was here at the behest, evidently, of the United States government to look at the human rights situation of people of African descent in this country. And then PACA was able to be chosen as the anchor group for their Washington, DC stop in this area. So we were able to organize the, the engagements or the events around them, looking at the grassroots situation, or being able to meet with the community.

Of course, they also had other meetings in their fact finding mission with the government, the State Department, and other groups. We didn’t have anything to do with organizing those meetings. But we were able to, to take the lead, or actually be in charge with how they met with people in the Washington, DC area. They also went to Baltimore, New York, Chicago, and Jackson, Mississippi. And the national tour, their national visit, was coordinated by the U.S. human rights network, which was able to identify anchor groups, like they identified us, in those other places that took the lead in organizing their engagement with grassroots community civil society, if you will, in those places.

We hosted a town hall on January 27 at Union Temple Baptist Church, and it was a community town hall for the purpose of allowing the working group to meet and engage directly with the most affected African community in the DMV area, DC metropolitan, DC, Maryland, Virginia area. And so it was to be able to have those most impacted give stories and testimonies, and describe our situation here as it relates to all kind of issues of the repression and oppression of an LGBTQ family, people affected by gentrification and displacement, and of course the very paramount issue of police terror against our people. And so they were able to hear some very compelling and heartfelt testimony, and be able to add that information to their fact finding. People were able to come up, and a lot of people did, give them reports or testimonies or things like handouts to actually take away from them.

The difference, also, one of the things that was different that was unlike the last time, is before this time they come on the heels of a slew of non-indictments of police who have been killing our people with impunity, and also very ineffective State Department, or just department investigations into the matters. And so we see the Black Lives Matter and all kind of movements who’ve arisen to shed light on that, so they’re coming in that context, in that climate, and we’re able to be able to see the role and function of the police as an instrument of control, and us as a domestic colony, people who are colonized, and then our situation in this country being a direct result and a natural consequence of us being brought and enslaved here, and being used as labor, and now being under these current conditions a surplus population. An expendable people, here. And then what we’re facing is the result of that.

And so we were able to express that to them, and they were able to actually in so many ways acknowledge a lot of that in their preliminary findings.

The findings of the UN were very interesting, and a lot of what happened in 2010, they found some similar things. Discrimination when it comes to housing and education, and things like that. But what was different in their findings here is they actually made explicit call for reparations for African people. They also likened our–they talked about police and the police killings, which they didn’t talk about before. And they likened that situation to the Jim Crow days and lynchings, and things like that. They said it was a continuation of those things. And they actually acknowledged our, the call around the country, and particularly and also here, for community control. Community control of things like police. And so they acknowledged that as a recommendation and a solution.

We need investigations to come. We hope, in this instance, that we’re not just putting all our eggs in the basket and getting redress from the United Nations. We think that this is also an opportunity, a window of opportunity for us to intensify our grassroots organizing, and building what community control would look like, while we also use the arena of putting this on the world stage and also the, the tool, the mechanism of taking our case to the Human Rights Council and to the United Nations.

And so we’re hoping that this fortifies that movement, and that we don’t get complacent and we don’t wait for this, but we’re actually using the time in between now and then and beyond to organize our people around control of our communities and all its facets. And so that’s what we’re, we’re hoping.

And then they come out–and what also, what we’re seeing, particularly when it comes to the police, that a specific investigation needs to be happening by the United Nations on the issue of police and police impunity, all the way up to the Justice Department. And we believe that if they do this investigation, they’ll find complicity. Outright conspiratorial conduct when it comes to how they’ve been, how the police have been carrying out their terror and their program, which is really, essentially, a program of genocide against our people.

We think it’s important to engage the UN, in particular because it raises our struggle from a struggle of human–civil rights to human rights. And we believe that as long as we struggle with the, the mistaken assumption that we share the same interest as, you know, how America is defined and contextualizing and hoping, look at redress from the powers that be that have a vested interest in keeping us in this situation, then we’ll never get justice. Just like Malcolm X told us, we can’t get justice from going to the wolf who is actually responsible, or the fox who is actually responsible for maintaining this situation.

And so we want to take it out of the context, and see ourselves and relationship also to the millions, hundreds of millions of African people around the world who face similar conditions simply because we are Africans. And so once we do that, then we’re not only taking our case to a higher level and being able to engage a different, a different institution, on this [basis] an international institution. We’re also opening up the door for our people to look more broadly at who we are connected with, in terms of not just being, you know, black, African-Americans, which in a lot of ways is really just an oxymoron. But being African people that needs to forge connections and agency transcontinentally.

GARRETT HARRIS: The Justice4Zo campaign started about a month after the killing of Alonzo Smith. Alonzo Smith, short for Zo, or long for Zo, is a young man who was killed by special police in Southeast DC. And following his murder at the hands of security, DC police refused to release any information involving the killers, who the officers were, or the security officers were. And they actually deemed it a justifiable homicide. PACA formed under the, under the banner of Justice4Zo, actually.

And so we came together and put pressure on Marbury Plaza, put pressure on MPD to try to get some closure for their family. But also to make a, to draw a larger link to the killings that were all around, that have been happening to African people all over the country. And we had some successes, as far as forcing the, forcing MPD and [inaud.] to at least respond to the mother of Alonzo Smith, because she had been getting the runaround for a long time. But we also realized that there’s been massive mismanagement, or some people would say that’s, they’re doing their job. But, but there’s been massive mismanagement as far as how police should, should handle murders, or any kind of criminal case. The Internal Affairs officer hasn’t been, has been questioning family members instead of questioning people who were actually witnesses, et cetera.

So we see that, that it goes to our call, a call for the UN to investigate the United States, because not only are local jurisdictions incapable of investigating murders by the, by the state of our people justly or fairly, but also as we see in Ferguson and other localities, the DOJ is also just as incapable of bringing any type of justice or any type of thorough investigation into the killings of our people.

So it’s also significant that the UN Working Group actually mentioned Alonzo Smith and his death, which gives us a platform, if you will, to raise up his case and the contradictions that exist all around it, from how the MPD handled it, to the Internal Affairs investigator, et cetera.

Using Theatre and Performance Art to Empower the Community

What Trump’s Campaign Reveals About Race and Voting

Hipocresia! A Revolutionary Perspective On Obama’s Visit to Cuba

Preferred Jihadists and the Crisis in Syria

Revolutionary and Democratic Socialism: From V.I. Lenin to Bernie Sanders