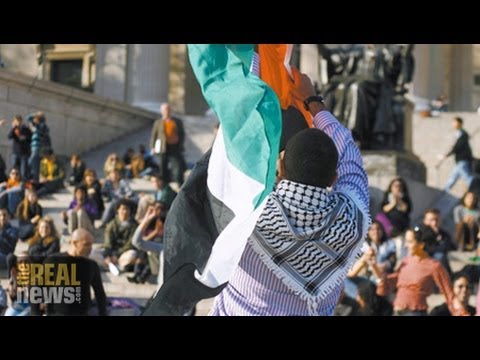 A lecturer at Columbia College in Chicago says he is facing issues of academic freedom after the college administration canceled one of his two classes on the Israel-Palestine conflict. Professor Iymen Chehade says he was targeted unfairly after a student alleged violence in the teaching of his course when he screened the documentary 5 Broken Cameras. You just saw a bit of the trailer earlier. The administration claims the decision to drop one class was based simply on academic scheduling and enrollment figures.

Now joining us is that lecturer, Professor Iymen Chehade. Iymen Chehade is also active in the area of public policy and human rights regarding the Israeli-Palestinian conflict.

We also have joining us, remotely, is Rima Kapitan. Rima is the owner of Kapitan Law Office in Chicago, Illinois, and her current focus is on academic cases.

DESVARIEUX: So, Iymen, I’m going to start off with you. Just kick us off. First of all, why did you decide to show the documentary 5 Broken Cameras?

CHEHADE: Well, one of the main objectives of this class that I teach is to humanize this issue. We talk about history and we talk about politics and we talk about theory and so forth, but we never have an opportunity to understand what occupation is actually like.

Now, the movie 5 Broken Cameras, of course, as you know, is about the occupation, the mechanisms of occupation. And in the end, what people have the opportunity to see is how individuals, how people are affected by occupation. So it really gives students a frame of reference. We don’t–most of us here in the United States have never experienced what occupation is like, and so we do not have a frame of reference. And so the movie gives that to students. And it’s really a wonderful addition to the class. And I have added it since I first learned about the movie.

DESVARIEUX: Alright. Just so our audience knows, we invited someone from the Academic Affairs office at Columbia College to discuss their decision to drop Professor Chehade’s course, and we got this statement from vice president of academic affairs Louise Love. It reads:

Columbia College Chicago would like to publicly acknowledge its support of instructor Iymen Chehade in his use of the widely acclaimed documentary 5 Broken Cameras to educate students in his Israeli-Palestinian conflict course. Reductions in the numbers of sections or courses offered at Columbia reflect a multitude of factors, such as overall student enrollment, targets for average class size, and rotation of curriculum. Reductions are not made to alter a specific academic field of study or political perspective. And any course on campus may be offered at a reduced frequency from past semesters. The college reaffirms the right of all faculty members and students to exercise academic freedom in a manner that Mr. Chehade has enjoyed since he became a member of HHSS.

So, Iymen, clearly I know you don’t agree with that. Do you feel like you’ve been able to exercise your academic freedom in this case?

CHEHADE: Well, absolutely not. And first off, there has never been an address as far as this particular issue is [concerned]. Some of the claims have been based on this idea of class size and number and so forth.

I do want to point out that this class was contracted for me to teach. And so I had two sections of it. And, now, within getting those two sections, I was called into the chair’s office about an allegation of being biased by a student. I was told in the meeting that I needed to be balanced. Within a few days after that meeting, and after registration had already begun, within two hours the class was removed. We will never have an opportunity to see whether the–or how many students would have been in the class, because they eliminated the class from students to register for.

But I can tell you one thing. This is a very popular course. It’s a course that’s garnered a lot of interest at Columbia College. We’ve had three sections of it at one time. There is a consistency as far as the high number of students in the class in all three sections when I had the three sections and all two sections when I had two sections. And so the issue of class size, it does not make sense when you put that all into the context of the student coming in and claiming biased and then I’m called down to the chair’s office and asked to be balanced, and then a few days later the class that I already had been contracted to teach and had already gone on to registration was removed from the Columbia College schedule.

DESVARIEUX: So, Rima, I want to get you into this conversation. You obviously have a legal background. Do you think there is a case to be made here that the college violated Iymen’s academic freedom?

DESVARIEUX: Iymen, you know, it’s common to hear calls for a more balanced approach, especially when you discuss Israel and Palestine. Isn’t this a fair demand in an academic setting, especially in regards to a subject of such important geopolitical significance and human rights?

CHEHADE: Well, when you take a look at the conflict itself, it is asymmetrical. It is–people like to present it as an issue that is between two equal opposing sides that are fighting over territory, but it is much more than that. It is actually one group of people who have the power that is derivative of a nation state, which includes a military, which includes funding from around the world, against a group of people who do not have civil rights and who are under occupation, which is illegal under international law–the building of settlements, the continued dispossession of the Palestinian people for decades now is–if you look at international law, these are facts. These are not opinions. These are not things that can be balanced, because they are fact. And so the presentation of these facts is what the issue is here.

Now, this is not the first time that I’ve been accused of being biased in my classroom. For example, I’ve had students who have been upset because I have used the term occupied instead of disputed to describe the 1967 territories. If you go to the United Nations and if you go to international law, these territories are occupied under international law.

And so I’ve had an assignment that I give at the end of the semester, as another example, which is to solve the Israeli-Palestinian conflict with a two-state or a one-state solution, with the condition, with the stipulation–and it’s the only stipulation that I give, besides the size of the paper (it’s a three-page paper), which is that you cannot ethnically cleanse people. You cannot remove them from their homes. I’ve [had] a student in the past who has had a problem with that because this student believes that this land is exclusive to a particular group of people.

And so this idea of balance and this claim of bias in the context of this particular issue here is very difficult to–it’s impossible. I would be lying if I presented this issue as a symmetrical conflict between two opposing sides.

DESVARIEUX: And it’s not just teachers that are saying that they are facing these issues of academic freedom. Let’s take a look at how students on campuses across the country are faring with the issues of academic freedom. For example, this month there was a case in Northeastern University in Boston, where students were suspended for disturbing mock evictions in student dormitories. The mock evictions were intended to bring attention to the demolition of Palestinian homes in the West Bank and East Jerusalem. And there was also a case in Barnard College where there was this huge uproar over the hanging of a banner that said, “Stand for Justice, Stand for Palestine”.

So, Rima, I want to turn to you. Put this in perspective for us. Are we seeing more cases of students’ academic freedom being challenged? And how does this relate to Professor Chehadi’s situation?

KAPITAN: Absolutely there’s something similar going on at Barnard and at Northeastern. One of the ways that opponents of activists for Palestinian rights or professors who discuss Palestinian rights, one of the tactics they use, as opposed to simply addressing the substantive points they’re making, is attempting to silence them through things like demand for balance. So, for example, at Barnard College, a banner calling for justice in Palestine was removed after the administration was accused of, essentially, bias. And what the university explained after it removed the banner is that, quote, we may have inadvertently given the impression that the college supports these events. So the college was accused of bias, just like at Columbia a student complained about bias.

And the broader point here is that administrators shouldn’t be making determinations about the content of student speech, about the content of faculty speech. At Columbia College, and as at many universities, professors and students are protected in their academic freedom. And at Columbia College, the adjunct professors are protected against, quote, institutional discipline or restraint in their discussion of relevant matters in the classroom, unquote.

So, in this case, Professor Chehade, not the administrators, is the expert on the issue of the history of the Palestine-Israel conflict, and he should have been permitted to make determinations about the academic content of the course.

DESVARIEUX: Alright. Rima Kapitan and Professor Iymen Chehade, thank you both for joining us.

November 27, 2019
Sign Up for Our Newsletter
Help Us Make Real News!