Zinn on class in America

Howard Zinn Pt2: In the United States we are brought up to think there's only one class

Howard Zinn Pt2: In the United States we are brought up to think there's only one class

Zinn on class in America 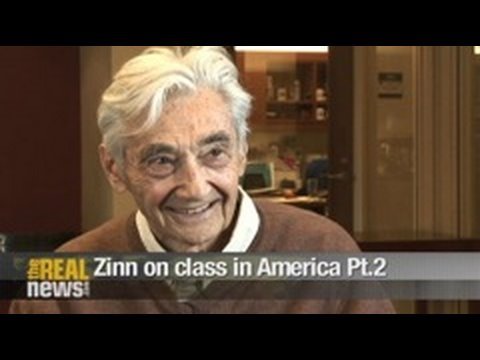 PLEASE NOTE, THIS IS AN UNEDITED TRANSCRIPT. THE REAL NEWS NETWORK IS NOT RESPONSIBLE FOR MISTAKES. EDITORIAL CHANGES MAY OCCUR.

PAUL JAY: Welcome back to the next segment of our interview with Howard Zinn. We’re in Harvard in Boston, and we’re talking about the Obama administration, the economy, and where we’re all headed. Thanks for joining us. So we left off, in the first segment of the interview, talking—you were talking about how Roosevelt had a massive direct-jobs program to try to stimulate the private sector to then, hopefully, hire. He just went out and created a program hiring millions of people. Now, the Republicans are making a critique, and other economists who you can say believe in the free market are making [inaudible] that any of this, including Obama’s plan, or the plan you’re proposing, direct hiring, leads to massive inflation, that there’s no way to pay for all of this. You wind up having to print money. And so in the end you compound the problem. So even if you have a stimulus for awhile, where you employ people for awhile, at the end of all this the currency’s so debased that you wind up having a more severe crisis. What do you make of that?

HOWARD ZINN: Well, it’s interesting to me that when the government is spending hundreds of billions, into the trillions, to give to the banks, they don’t say that is government spending which will lead to inflation.

JAY: Well, some do, some do. Like, Republicans are kind of hypocritical about this [inaudible] Republicans are saying if some Republicans support some of the bank bailout and they don’t want the other kind of stimulus. But there are other economists out there not so much connected to the Republican Party who are just against all of it, including the bank bailouts. They say let the banks go bankrupt. Essentially, the theory is capitalism needs to go through these cycles where it destroys these overinflated things, and let them go, and then rebuild.

ZINN: Yeah. Well, I would certainly agree. Let them go. [inaudible] don’t use money to bail out financial institutions and industries, you know, that have failed. But on this issue of building up a huge debt, spending more money than you have, there was no such cry raised—this is my point—when a government that could not find enough money to increase the wages of teachers or government, you know, that could not find more money for health programs, that this government suddenly finds this huge sum of money, you know, for the bailout. And the argument against a single-payer health system that is a government-organized free health care for everybody is that it would cost too much money. But the fact is that the money is there. The money exists in two places which can be tapped and which hasn’t been tapped. One is in the enormous incomes of people at the very top. If you taxed people at the very top in a truly progressive way, you would have hundreds and hundreds of billions of dollars to pay for programs like health care, jobs, and so on. If at the same time you decreased very drastically the military budget—. Now, our military budget now is $600 billion to $700 billion for the year.

JAY: Some people say that if you take everything, then it might be as much as $1 trillion.

ZINN: If you take everything?

JAY: If you include everything—associated costs with bases and other things, it might even be $1 trillion. Some people [inaudible]

JAY: So if you were assessing this period from the point of view of people’s history, what do you make of this Obama administration so far? And what attitude should people take towards it? Because while from the left, and even some sections of the right, Obama is not living up to what they hoped he would do, the Obama administration is in a fight with the Republican Party, still, on the right, even to do some of the progressive things they’re trying to do, or incrementally progressive things they’re trying to do. So the fight goes on with the right, now. And looming in the distance not that far away, assuming this administration will last eight years, what happens eight years from now if this administration is deemed to be a failure? And what kind of administration follows?

JAY: You sold a lot of books. That gives you the—.

ZINN: Of course. And I think the job of the progressive movement is to save Obama from and the Democratic Party from a defeat in the next election or two elections from now, because if Obama continues with what I think are puny measures against a situation which is very far from puny, that is, that this is a very serious crisis that we’re in, both abroad in foreign policy, in the two wars going on, and in the domestic economic crisis. If the puny measures continue, then, yes, the Republicans will have a very great advantage in 2008. And a progressive—.

ZINN: Well, but certainly in 2008, yes. And I think that a progressive movement needs to create a kind of energy around Obama and push the Obama administration into the bolder moves that will help solve our present situation, and at the same time make his administration and the Democratic Party invulnerable to a Republican onslaught in that election that takes place eight years from now.

JAY: But how do you get there? Right now there’s barely—I don’t know. I think that they had a health reform—one of his consultative conferences, I think they invited one person that progressives can say they’re [inaudible] progressive [inaudible] When he had his economic consultative conference, I think there were two. And in the cabinet, I think that even the labor secretary’s sort of considered that, but other than that, the number’s sort of zero. His advisory committee around him, I think the progressives would probably claim zero. Where is there any indication that Obama is listening to any of this?

ZINN: Well, I mean, you’re right in pointing out that the people closest to Obama—well, the people he has appointed to be closest to him—are not giving him the kind of advice that will really save our country. And, therefore, the American people have to create an energy that bypasses his advisors and reaches him. That is, if people are in the streets, if people are demonstrating, if people are outside the gates of the capital, and if people are out on the banks of the Potomac like the Bonus Marchers, or like Martin Luther King’s, you know, poverty campaign, poor people’s campaign, if people are out there, then the president, whatever his advisors are saying, the president will have to listen, just as in the Vietnam War. The people surrounding Lyndon Johnson and the people surrounding Richard Nixon were all for continuing his same policies, but what was happening out in the society was that a movement was growing which they had to listen to. And so the war in Vietnam had to come to an end because of that. That’s what we need. We need a grassroots movement. We need a kind of movement and we need the kind of turmoil that took place in the 1930s, where you had civil disobedience all over the country, you got strikes all over the country.

JAY: Well, if there’s going to be something at a level that’s going to be heard and have significance, one would think, the big labor unions are somehow going to have to be a part of this. And so in the next segment of our interview, let’s talk about what’s happening with the big trade unions, ’cause they’re about the only big national organizations there are that might have this potential. Please join us for the next segment of our interview with Howard Zinn.

Howard Zinn was an American historian, political scientist, social critic, activist and playwright. He is best known as author of the best-seller ‘A People’s History of the United States’. Zinn has been active in the Civil Rights and the anti-war movements in the United States. Howard Zinn passed away on January 27, 2010. Zinn was…