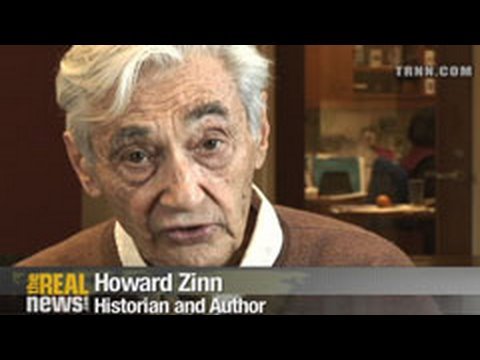 PLEASE NOTE, THIS IS AN UNEDITED TRANSCRIPT. THE REAL NEWS NETWORK IS NOT RESPONSIBLE FOR MISTAKES. EDITORIAL CHANGES MAY OCCUR.

PAUL JAY: Welcome to The Real News Network, coming to you from Boston, from Harvard University, in a building that’s on the roof of the Harvard Law School. And this is where President Obama started his career, more or less. You’re now talking to Howard Zinn, who I think needs no introduction. But if for some reason you do need an introduction, you should go read A People’s History of America, because it will tell you the story of an America you don’t normally see. Thanks for joining us, Howard.

JAY: And speaking of people’s history, the essence of people’s history of America is that America is a class society. And if you’re going to tell the story of America, you have to tell the story of its different classes and the struggle between those classes. And your book does that, and I think pretty soon there’s a film coming out based on the book. If you imagine you were writing for A People’s History the current moment, writing the history for us now, what are the different classes doing, and what’s the nature of that struggle, all under the place that gave birth to President Obama, Harvard Law School?

ZINN: Well, it’s interesting that the word “class” is entering the vocabulary now at this point of sort of great economic distress, financial crisis.

JAY: But there’s only one class, apparently [inaudible] middle class. There’s no lower or upper.

ZINN: Well, no, it’s interesting that in the United States we are really brought up to think there’s only one class. That is, the idea of class conflict, class struggle, I mean, that is foreign to American culture. We’re brought up to think that we’re part of one big happy family. You know, Constitution preamble starts off, “We the people of the United States,” as if all of us together, all the people—. You mean those black slaves who were 20 percent of the population, they were part of “we the people”?

JAY: I think the definition of people is sort of a changing thing.

ZINN: Yes, yes, some people are people, and some people are not people. So today the word “class,” it sort of comes as a kind of jarring intrusion into our complacency about, oh, we’re all one class, because it seems clearer now than it has been that we really do have different classes. And people are becoming more aware of this. We have a very, very rich class of people up there at the top of the heap, you know, the financiers and the industrialists who are half of one percent of the population and who make as much money as probably the bottom 50 or 60 percent of the population, and there are all these other people in the country who are suffering as a result of this economic crisis. So people, you might say, are class conscious. That’s another term that hasn’t entered the American vocabulary, “class consciousness.” And yet, without using the term, Americans have always been class conscious; that is, Americans, I think, have always been aware that there are rich and poor, there are people in charge, and there are people who are doing the hard work and getting very little for it. We have been a class society from the very beginning.

JAY: Now, when President Obama campaigned, he said, “We’re not red, we’re not blue, and we are the United States of America,” the same kind of jargon as “we’re all one people.” On the other hand, he did talk about the middle class. And in his inauguration speech and afterwards, he said his policies would be dedicated to enhancing the well-being of the middle class. So are they now? ‘Cause we’re a couple of months now into the administration. Are his policies going to help the middle class? And is he siding with the middle class in terms of the economic crisis?

JAY: Now, in his speech to Congress about the economy, he talked about, he gave warning that more bailouts, more money was going to go to try to save the banking system.

JAY: On Monday, he just announced some new measures [inaudible] what they’re calling toxic assets, which I think is interesting: people’s homes have been turned into toxic waste [inaudible] terminology. But, at any rate, in that speech to Congress, he said, you know, “We know this isn’t going to be popular, but it’s not about helping the banks; it’s about helping you.” So are these policies that are now dealing with the banking crisis really going to help you and me in the middle class?

JAY: But Obama’s argument, the administration’s argument is: without this bailout, liquidity can’t come back into the system. Loans and credit are—what are they called?—the lifeblood [inaudible]. So it’s really for the sake of jobs and such that it’s being [inaudible]

ZINN: Well, but the theory behind all of this is the old, well, what we thought of as the Republican theory, and that is the trickle-down theory. Actually, it’s not just a Republican theory, because obviously the fact that Obama embraces it shows that it’s a bipartisan theory. The trickle-down theory means if you have a problem, if people are in trouble, you pour huge sums of money into banks and businesses and industries on the idea that that money will then trickle down, you know, to the homeowners and the job-holders and the unemployed. Well, that’s very dubious. Now, Roosevelt worked against this idea. Roosevelt didn’t wait for things to trickle down. Roosevelt took huge sums of money out of the federal budget and gave it directly to people.

ZINN: In jobs programs. Yeah. He put 6 million, 8 million people to work. Now, if you did the same thing in proportion to the population today, you would be putting 12 to 15 million people to work, as opposed to I don’t know how many million Obama will put to work, maybe 1 or 2 million. But the point is that Obama is using a very conservative theory, the trickle-down theory, and he should be—instead of giving money to banks, hoping that the banks will then take care of people who can’t pay their mortgages, but not really being sure of that, should be giving money directly and help directly to the people who can’t pay their mortgages.

JAY: The argument they give—in fact, he was—in Obama’s, again, speech to Congress, he was actually bragging about the fact that 90 percent of the jobs that would be created are being created in the private sector and that—. They seem so concerned about anything that looks like it’s too much government intervention. And I guess that the real point is: can it work without such a government intervention?

ZINN: This is one of the problems with the Obama administration. And it really goes to Obama’s own philosophy, unfortunately, which is a philosophy of we must do things through the market; we mustn’t have government do things. It doesn’t work. The market hasn’t worked and hasn’t worked for homeowners. It hasn’t worked for people that have jobs. And what’s wrong with big government? Big government is a wonderful thing if the government is doing something good. I haven’t heard anybody, Republican or Democrat or people in the press, point to the fact that the biggest government makes war. War is very big government, and they don’t complain. They don’t say, “Why don’t we let private enterprise carry on the wars?” No, government carries on the war. The fact is that if you’re going to do anything in a big way, like war, you need the government to do it. If you do anything in a big way, like give jobs to millions of unemployed, the government has to do it.

JAY: Well, in the next segment of our interview, let’s talk about another critique from the other side, which is: some economists are saying that the stimulus—and if there was a massive [inaudible] jobs program, where the government hires millions of people, but in the final analysis, they say, this leads to hyperinflation, ’cause how do you pay for all this, except for printing money? So in this next segment of the interview, let’s talk about that.

JAY: Please join us for the next segment of our interview with Howard Zinn.

Howard Zinn was an American historian, political scientist, social critic, activist and playwright. He is best known as author of the best-seller ‘A People’s History of the United States’. Zinn has been active in the Civil Rights and the anti-war movements in the United States. Howard Zinn passed away on January 27, 2010. Zinn was…