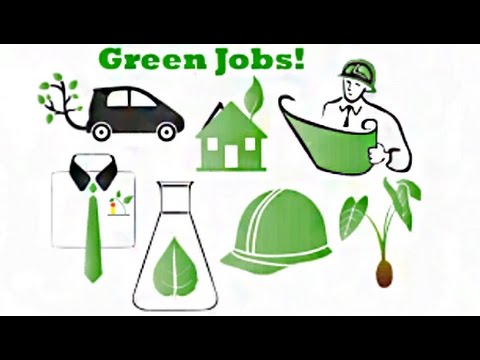 The issue of climate change, perhaps the greatest threat facing us has gotten very little attention during this year’s presidential race. However, the two major party candidates provided us some clues as to where they stand on the issue. Donald Trump for example has denied that climate change is a problem and has instead said that if he’s elected he would increase investments in fossil fuels.

Joining us now to discuss this is Heidi Garrett-Peltier. Heidi recently published an article on this topic on the website The Conversation. Heidi is an assistant research professor at the Political Economy Research Institute of the University of Massachusetts Amherst. Heidi, so good to have you with us.

HEIDI GARRETT-PELTIER: Thank you very much. It’s good to be here.

PERIES: Heidi one of the reasons that the transitions to clean energy is so controversial is that people working and families that rely on these jobs and the communities that rely on it, all think that they’re up against these clean new jobs and that they will lose their jobs in the fossil fuel sector. So give us a brief summary as to why you believe this transition does not really have to be about losing jobs but creating jobs.

GARRETT-PELTIER: Sure, well that’s a really important point because at a macrolevel when we look at the economy as a whole, the transition to clean energy creates many more jobs in renewable energy industries and energy efficiency industries and all of the supply chain that goes into those industries. So many more jobs are created than the number of jobs that are lost in fossil fuels but that doesn’t mean that there aren’t potential hardships for the people in the communities that are dependent on fossil fuel employment. So, one of the things that we’re actually working on here at the research institute, at PERI, is that the concept of a just transition.

So what does it mean for people and communities who are dependent on fossil fuels for their living, for their livelihoods. For some it means retraining and having enough funding from the federal government to provide retaining especially for people who are earlier in their careers. For people who are later in their careers and closer to retirement age, it might mean an earlier retirement. But there are implications for specific individuals and communities. But the other thing to keep in mind is that clean energy jobs can be created in many different communities.

So there are specific renewable energies that need to be in places where there is more sunlight or more wind. But if we think about something like weatherizing homes or making commercial buildings more energy efficient, those kinds of instillation, construction jobs and the manufacturing jobs creating those energy efficient technologies and renewable energy technologies, those can be situated anywhere.

So if we are thinking of this really holistically in terms of where the clean energy industry as a whole is going and we think specifically about the impacts on communities that stand to lose jobs, we can stand to lose some of these manufacturing plants in those communities and also the weatherization and energy efficiency sort of where it will happen economy wide in all communities since there are building everywhere that are inefficient. So that offsets some of the job loss.

PERIES: Heidi, why are jobs in the clean energy sector cheaper to create?

GARRETT-PELTIER: Well there are a few different things. One they’re a little bit cheaper to create because the pay on average is lower in clean energy than it is in fossil fuels. That being said, if we look at the jobs created for lower credentials and a little bit lower pay the sort of middle income, college educated jobs, and the upper income jobs, there are more jobs created at every level in clean energy industries than in fossil fuel industries for the given amount of spending. So even though the average pay is lower, the number of jobs at each level of pay is actually greater in clean energy.

But there are a few reasons, not just the difference in pay. There are a few reasons that clean energy jobs, that there are more of them created for each million dollars or each billion dollars of spending and a couple of those other reasons, one is domestic content. So the portion of the industry that is domestically based, so the inputs, the goods and services that make up the supply chain of energy efficiency and renewable energy industries, more of that is located within the domestic economy. So, that creates more jobs within the US as opposed to something like importing oil where we might have refinery jobs here and some extraction jobs here but we’re also leaking a lot of spending out of the country for imported goods.

PERIES: So let’s take a look at how much the US government would need to invest in clean energy in order to create millions of jobs that Hillary Clinton is proposing and are these jobs above and beyond the ones that are lost in the fossil fuel industry.

GARRETT-PELTIER: Absolutely. So, two years ago we published a study called Green Growth that is US based. Last year we published another one that looks at a few other countries as well. But when we looked at the US green growth, what we would have to do in order to bring down carbon emissions by 40% over 20 years which is the recommendation by climate scientists, we estimated that 1.2% of GDP would need to be spent on this transition to clean energy?

Even though that’s certainly not an insignificant amount of spending, it is very achievable, very affordable, very feasible. 1.2% of GDP would create nearly 4 million jobs in clean energy. If we assume that for every dollar we put into clean energy, we take a dollar away from fossil fuels, which is not the case but that sort of worse case scenario. If we assumed that that was true then we would lose not quite a million jobs in fossil fuels. So, we would still economy wide, would come out ahead by 3 million jobs. So, 1.2% of GDP is actually 2.7 million jobs would be created and this is for a 20 year programs.

PERIES: Also Heidi, one of the frequent criticisms of government intervention in job creation is that so called Solyndra problem which you address in your article. That is, Solyndra is the solar cell producer that had received half a billion dollars in federal loans and then it went bankrupt. So, Trump and others point to this as a waste of money. What is your response? Was it a waste?

GARRETT-PELTIER: Absolutely not. It’s really amazing how much press the failure Solyndra got and how little press all the successes of the Loan Guarantee Program got. So Solyndra makes up a tiny program of all the loan guarantees made by the department of energy. So, in the stimulus package in 2009, there were billions of dollars set aside for the Department of Energy to make loan guarantees for things like renewable energy producers and other types of clean energy industries and so what we heard about was this one failure. If we look at all of the failures of the Loan Guarantee Program it adds up to only 2% of all of the loans made. So meanwhile the 98% of the loans made are successful and they’re paying back interests.

GARRETT-PELTIER: Thanks very much for having me.

Heidi Garrett-Peltier holds a Ph.D. in Economics from the University of Massachusetts, Amherst and works as an assistant research professor for Political Economy Research Institute (PERI). Her research focuses on the employment impacts of public and private investments, particularly in the realm of clean-energy programs. Heidi has written and contributed to a number of reports…