The rapid, extensive spread of COVID-19 is partly a crisis of globalization. The pandemic gives us an opportunity to rethink our global economic system in favor of 'deglobalization.'

The rapid, extensive spread of COVID-19 is partly a crisis of globalization. The pandemic gives us an opportunity to rethink our global economic system in favor of 'deglobalization.' 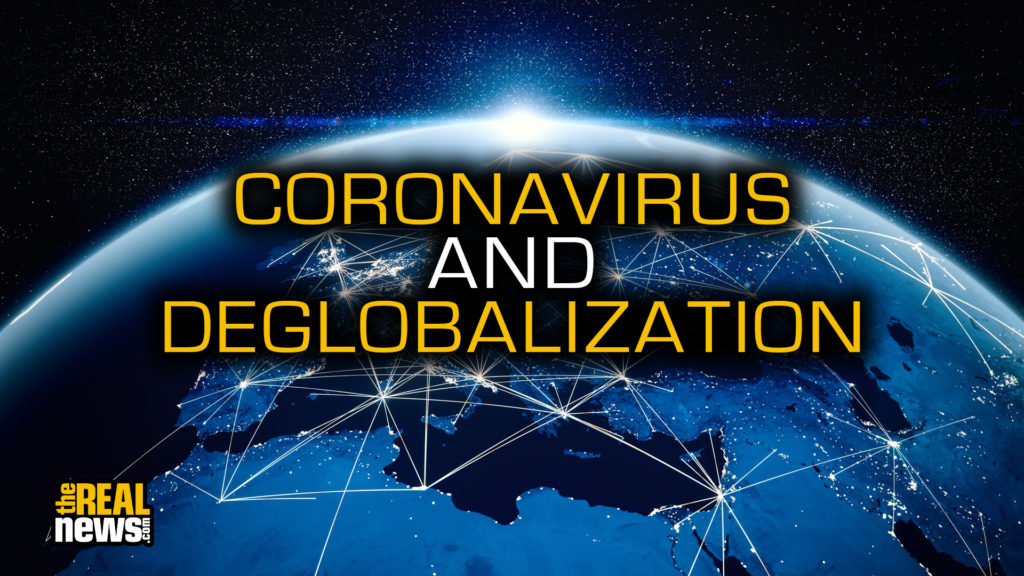 Greg Wilpert: It’s the Real News Network. I’m Greg Wilpert in Arlington, Virginia. As the world enters an unprecedented lockdown to fight the coronavirus pandemic, it makes sense to step back and look at what led us here and what a world that is less susceptible to pandemics might look like. One prominent thinker considering this is sociologist Walden Bello. In an article on the website Foreign Policy In Focus, he outlines why globalization is one of the main causes of this pandemic and how the pandemic could eventually lead to what he calls deglobalization.

Joining me now to discuss his article titled Coronavirus and the Death of Connectivity is Walden Bello. He’s professor of sociology at the State University of New York at Binghamton, and the author of many books most recently of Counterrevolution, The Global Rise of the Far-Right, and of Paper Dragons: China and the Next Crash. He joins us today from Bangkok, Thailand. Thanks for being here again, Walden.

Walden Bello: Thanks, Greg, for inviting me despite the circumstances.

Greg Wilpert: Right. So in your article, you say that the pandemic was to a large extent caused by globalization and that its aftermath could lead to a process of deglobalization. But before we get into that, we need to set the stage. Talk about how the great recession of 2009 affected globalization and where we are today.

Walden Bello: I think that the first great crisis of globalization took place in 2008 with The Great Recession. Basically, what we saw during that period was that so many of the aspects of globalization, such as supply chains, ground to a halt. Even The Economist at that point was saying that the integration of the world economy is falling apart, owing to the speed of both the financial crisis and the impact under real economy.

Let’s not forget that at that time, not only did the financial system globally come to a halt, but there was tremendous impact on the real economy. In China alone, 25 million people were laid out of work and hundreds of millions of people throughout the world in the global North as well as in the global South lost their jobs. There was stagnation for the coming several years. Europe was in recession for a long, long time. The United States had unemployment of about the… that was greater in 2015 than at the start of the financial crisis.

So we really had a situation whereby globalization and the integration of the global economy that that brought about really was in a major, major crisis.

Greg Wilpert: So it seems that the elites were oriented towards continuing the neoliberal globalization process, were basically intent on reestablishing the old order after 2009, that is more free trade deals, limited market regulation, and more government austerity. Now in your book on the global rise of the right, and also in your article, you argue that this approach among the elite provided an opening for the right, for the far-right. How and why did this happen exactly?

Walden Bello: You definitely are right that the elites of both the center right and center left elites were tied to the old border of neoliberalism and globalization. But, they had lost their faith in it. It was like they were just going through the motions during this time. But nevertheless, they didn’t see any other alternative but to stick to it. It’s because in fact, they did not change at all except adhere to the old methods despite the social costs of this, that this provided people in the far-right, for an extreme right to take up the costs of protecting the economies, protecting the political system and basically challenging globalization but giving it a twist that the basic cost of this whole thing was migrants or minorities, and that the elites were out of touch and that they were promoting this invasion of their societies by migrants, and that those people who had been there basically had the rights to the benefits of that society.

Basically, it was twisting around what many of us at the left had been saying, that globalization was the cause of the crisis and we really needed a more progressive world order, both at the national and the global order, but they were twisting it to say that, “Oh, let’s do protection, but only for those who have been here for a long, long time, the native population. Everybody else, keep out.” I mean, that’s simplistic of course, but that’s the kind of nativist and racist kind of reactions that the far-right played, that the far-right pushed, and which evoked a lot of support from workers and other sectors that were threatened and wanted to see an explanation for their crisis. So that was the opening that the crisis of globalization provided to the far-right.

Walden Bello: My sense is this, that during the crisis, as the far-right began to take advantage of nationalistic sentiments to promote a kind of protectionist, but negatively protectionist vision for their societies, and established elites were basically lacked legitimacy because of the crisis to which globalization had led and neoliberalism has led, China stepped into the leadership of the globalization process. This was when Xi Jinping came to power, and we had the economic nationalism of Trump. Xi Jinping stepped into this and he says that globalization was essentially good. It’s just that we needed to be able to smooth its rough edges, and that it was very beneficial to all of humanity. That was sort of the thing that happened.

Air transportation, air connectivity was one of the most important things that was being pushed, not only in order to be able to speed up the movements in the global supply chain, but also to push, take advantage of explosion on tourism at this point in time. Everybody wanted a piece of the pie that was offered by the tremendous number of tourists coming out of China into the rest of the world. And so many of the local sectors of the different economies, like that of Thailand for instance, became very much dependent on this air connectivity-triggered tourism.

The last thing I would just like to push here was that it was China came out, or the leadership in China came out with the Belt and Road Initiative, this really big trillion dollar program that evoked the images of linking Europe and Asia in the early modern era, and it was now going to be put at the global level. The Chinese leadership called it global connectivity. There were essentially initially two routes, the land route, okay, and the maritime route by around 2015. There were so many routes now, including a polar silk route that was supposed to bring together the world within a new system of connectivity. The context, in which that provided the context for the recent events, as we have the seen.

Now I’m not saying, of course, that there’s that direct connection in terms of globalization, say directly creating the conditions for the virus, I mean, the emergence of the virus. I’m not saying that. I’m just saying that when what happened happened in terms of the leap from viruses in animals to humans to which they took place, then this whole system of connectivity became the transmission, especially air connectivity became the transmission belt for a virus that was traveling at internet speed. So connectivity, you might say, created the conditions for the rapid, rapid, rapid spread off the virus.

Greg Wilpert: So if globalization carries some of the blame for the spread of the pandemic, now would deglobalization be the appropriate response to it? And if so, what does deglobalization even mean? How would it be different from what people on the far-right, such as Donald Trump, are calling for when they turn towards nationalism and against globalism?

Walden Bello: Well, deglobalization, just a bit of a history, we had proposed this as an alternative to globalization as early as the 2000 and 2001. In fact, I wrote a book that was titled Deglobalization and it came out in 2002. Basically, this was, we were saying that one, we needed to protect local economies from the way that industry and agriculture were being subverted by transnational corporations in terms of their cheap goods, and that we needed to use tariffs and other mechanisms to be able to protect, our farmers, and local manufacturers.

But beyond that, there was a sense that you needed to use an activist trade policy that would in fact sustain our national economies and not have them be disrupted by the impact of very cheap commodities that were being produced by this supply chains run by transnational corporations. And a lot of these supply chains were in fact located in China.

But beyond that, I think that beyond the policy prescriptions that we had around how do we maintain the integrity of national economies, we were basically saying that deglobalization rests on ideas or an approach that basically says we need to control markets so that markets don’t run society, but societies run markets. We said that values of justice, community, solidarity were very important as an canopy to be able to contain and direct markets rather than markets directing society.

You know, of course that the essence of globalization was to say that the best restraints on the market, the better. So everything was being chucked out of the window and it was a question of markets and profits being the centerpiece that would drive the global economy.

In essence, what we were proposing then was something that would say that we just need to have more local control, but in a progressive way that did not discriminate against people but in fact promoted social justice, welcomed migrants, and basically sought greater social equality.

That is something that the right has pushed out of the window and is just relying on this nationalistic anti-migrant and racist sentiments of basically saying, “Hey, it’s only for us to enjoy what are the benefits of this society, us meaning those of us who were originally here and of the right religion and of the right color and of the right culture. The rest, it’s off limits to them.” That was the way that the right distorted the message of deglobalization.

Greg Wilpert: Okay. Well, we’re going to have to leave it there for now. I was speaking to Walden Bello, professor of sociology at the State University of New York at Binghamton, who joined us today from Bangkok, Thailand. Thanks again, Walden, for having been on our program.