How Central Bank Independence Led to Impunity in Latvia

Latvia's extreme austerity and neoliberal experience has led it down the path of becoming a major hub for money laundering. Its Central Bank governor, Ilmars Rimsevics, is at the heart of the scandal, but enjoys the protection of central bank autonomy, explains former financial regulator Bill Black

Latvia's extreme austerity and neoliberal experience has led it down the path of becoming a major hub for money laundering. Its Central Bank governor, Ilmars Rimsevics, is at the heart of the scandal, but enjoys the protection of central bank autonomy, explains former financial regulator Bill Black 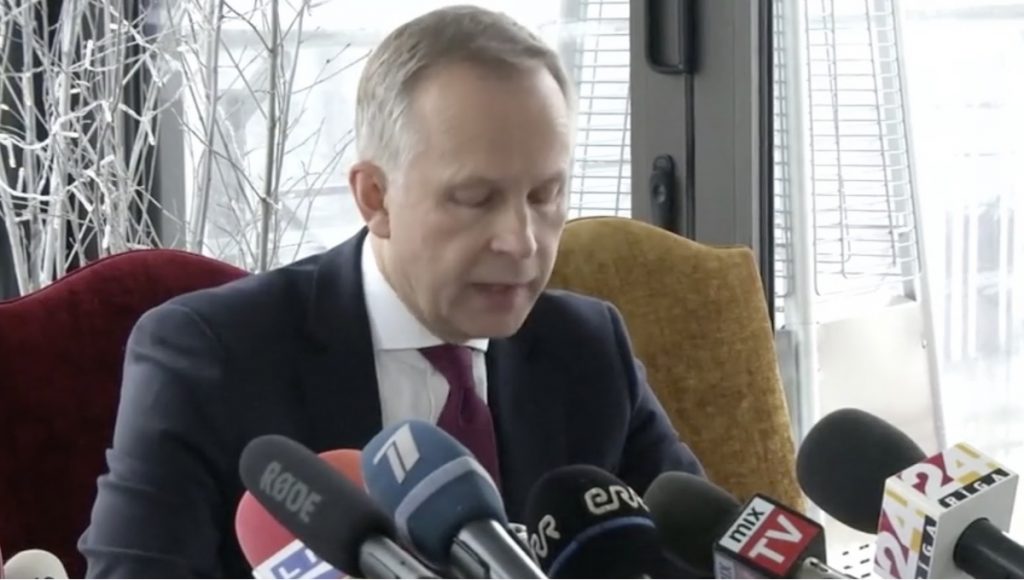 GREG WILPERT: It’s The Real News Network. I’m Greg Wilpert, coming to you from Quito, Ecuador. The tiny Eastern European country of Latvia, which has only about two million inhabitants, is in the news again, this time, because of its central bank governor, Ilmārs Rimšēvičs. At The Real News, we covered Latvia’s economic situation about two months ago, because a few years ago, Latvia was a poster child for austerity and neoliberalism that supposedly worked. Now however, the economy is doing poorly, and its banks are alleged to be engaged in massive corruption and money laundering. The central bank governor, Rimšēvičs, himself faces corruption charges, but has not yet been formally charged. Joining me to shed light on the latest developments for this poster child of neoliberalism, is Bill Black. Bill is a white-collar criminologist, former financial regulator, and Associate Professor of Economics and Law at the University of Missouri, Kansas City. He’s also the author of the book, “The Best Way to Rob a Bank Is to Own One.” Thanks for joining us again, Bill.

GREG WILPERT: So, for those who haven’t seen our earlier segment on Latvia, give us a brief summary as to what happened in Latvia since the global financial crisis.

BILL BLACK: Okay, so, slightly farther back. Of course, the three Baltic nations, Estonia, Latvia, Lithuania, from north to south in that order, just south of Helsinki, Finland, became independent states when the Soviet Union busted apart. And their great idea, brought you by all those neoliberal consultants and economists, was they should do what Finland did, and be a bridge between Russia and the West. And so, that’s what they did. And this produced massive corruption as the Russian system of kleptocrats emerged. Meanwhile, came the financial crisis of 2008, and that financial crisis crushed many, many nations, including the economies of the three Baltic states. Now, the right answer to that, in economics, is to have stimulus programs. But even then, indeed the head of the central bank that you referred to in Latvia, is the longest serving head of a central bank in all of Europe.

And his thing, and it was a religion with the him, still is, is austerity, austerity, austerity. Right? Just crush the workers, reduce their wages and such, and then we’ll be competitive. And of course, what happened is, the best and brightest young folks, as soon as they graduated, left. And so, one of the reasons they have such a tiny population is the population has actually been shrinking, as they export Latvians, especially their best educated folks. But meanwhile, on top of the austerity, they had this system that had been growing in league with the kleptocrats in Russia and with the rise of Putin. These are, all his cronies and such. And whenever you have that come into a banking system you get absolute corruption. And of course, the corruption can’t just be in the banks, they have to get away with it. So, what you get is corruption in the form of bribing government officials, quite literally. And then, of course, in all the other subtle ways that you reward folks. So, then the, as you said, for a very brief period, the austerity was pronounced to be a brilliant success. Latvia was held up as the best, the poster child for the success of austerity.

And then, it turned out, not only was it a welter of corruption that was then feeding back, really screwing up their democracy, screwing up their economy. But on top of that, the particular form of corruption heavily involved money laundering from Russia, and a significant part of it involving North Korea. Indeed, this is how North Korea financed the major developments it made in its ballistic missiles and the miniaturization the warheads that have put the United States at risk of attack, relatively soon.

GREG WILPERT: So, you mentioned that Rimšēvičs, the central bank governor, has been a huge advocate of austerity and neoliberalism in his country, and is the longest serving central bank governor in Europe. But he’s accused now of massive corruption. What exactly is he being accused of, and how is this connected to the policies that he was pursuing?

BILL BLACK: So first, we don’t know exactly what he’s being charged with, because he hasn’t been formally charged. But all of the media reports, and his own responses, say that he’s being charged with taking bribes. And there is a Russian kleptocrat who says that he and his bank were one of the folks that bribed. But on top of that, you would think austerity, conservative, that this would be very pro-law-and-order, you know, rule of law and all that stuff. Now, the head of the central bank has turned a blind eye to the massive money laundering and corruption of Latvian banks, and of course he’s not supposed to just be running the money supply, which no longer really exists, because they joined the euro. The principal thing he’s supposed to be doing is regulating banks, and he simply wasn’t there in terms of trying to prevent this corruption. And now, allegedly, we know why, because he was such a major recipient, according to the charges, the informal charges.

GREG WILPERT: So, last time we talked about the situation, we were focusing a lot on the involvement of North Korea in Latvia, but more recent reports have focused on the Russian involvement. That is, for example, the ABLV Bank, which is at the center of these money laundering allegations, only six percent of their deposits belong to Latvians, whereas the vast majority, forty-three percent, belong to Russians. Why is it, what are they doing, exactly?

BILL BLACK: So first, it’s the same story. The Russian story is the North Korean story, it’s just that the North Korean part is a subset. So, the broader story, again, is this: the smart guy economists and consultants came in and said, “Hey, you’ve got this big economy, Russia right next to you, you have all these people that speak Russian, you have tons of ethnic Russians with connections- this is what you should do, you should be financial intermediaries.” Indeed, their phrase was that “Latvia would be the Baltic version of Switzerland.” Right? In terms of banking. So, that was the plan from the beginning. And of course, if you invite a bunch of people who are amazing white-collar frauds and thugs into your country, very bad things are going to happen. So, they’re- most of the banks, and the largest banks in Latvia, don’t actually serve the Latvian people. As you said, the largest had- six percent of its deposits were actually Latvians.

Overwhelmingly, these banks are set up not for Latvians, but for foreigners, and that means to launder money, right? This is the way of getting it out of Russia, because everyone’s afraid that Putin will grab even more of the money and hold you hostage to get it. So, you want to get the money out of Russia. You steal it there, you steal it in other countries, and then you move it to other places, whoever will pay best. And among the people that would pay best were the North Koreans, who needed hard money currency, but through this money laundering, they were able to get hard money currencies to be able to buy key components and even the scientists, and such, that helped them nuclearize. And so, you have broad based corruption. It’s not really Latvian, it is exactly, really the title of my book, “The Best Way to Rob a Bank Is to Own One.” That is precisely the recipe that they’re following, and that this means that Latvia is the middleman, the complicit money launderer, for many of the worst frauds in the former Soviet Union.

So, for example, people have probably never heard of it, but Moldova, another one of those states that used to be part of the Soviet Union, had a billion dollar fraud. Now for Moldova, and that was basically destroyed, that was the big- essentially the entire budget for the year type of thing. They stole a billion bucks, right, using a major bank and ties to the head of state. That kind of corruption, indeed we have the Magnitsky Act, which people possibly have followed some because it’s a big part of what Putin wanted to get relief from, and was hoping that Trump would basically repeal or refuse to enforce the Magnitsky Act. Well, Magnitsky was actually killed, we think murdered, in prison, when he started to blow the whistles. And that brought- also, the money laundering wasn’t simply in Russia. It was largely in Latvia as well. So, Latvia is the obscure answer to the many questions of, why did this fraud occur and where did it occur, and how did the money leave? The answer is Latvia.

GREG WILPERT: One final, hopefully quick, question. There’s a curious situation here in the Latvian case, where, although there are serious allegations against Rimšēvičs, nothing has been done to remove him so far. I mean, they’re still working on the on the charges, but he cannot be removed, because the stated reason is central bank autonomy. And he’s even been protected by the European Central Bank, apparently. What does this say to you about the vaunted principle of central bank autonomy?

BILL BLACK: Well, that it serves to protect whatever the bankers are doing, and the bankers are running one of the world’s largest money laundering operations. That’s what you get. So yes, the Parliament, again, of Latvia, has voted fifty-five to nothing to ask him to resign, his own staff at the central bank has asked him to resign. The United States, under Trump, is hammering him as running and allowing a massive, corrupt operation, and is certainly taking the position that he is corrupt. So, it is obscene. In fact, it is the reductio ad absurdum of bank independence. The European Central Bank would actually seek to intervene. It’s asked the Court of Justice to rule and prevent this guy’s removal on the grounds that, well, he might be corrupt, but he needs to be independently corrupt.

GREG WILPERT: Unbelievable. Okay, I was speaking to Bill Black, Associate Professor of Economics and Law at the University of Missouri, Kansas City. Thanks again, Bill, for having joined us today.

GREG WILPERT: And thank you, for joining The Real News Network.