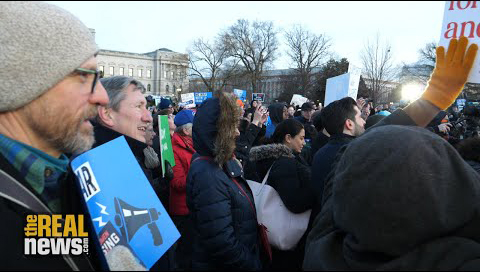 We’re here in Washington at the site of one of over 300 events across the nation, calling for no war with Iran. The events have been organized by groups like MoveOn and Indivisible, along with groups of veterans who are against a possible war in Iran as well. We spoke to some of the Democratic lawmakers, progressive Democrats who’ve come out here to speak out against war on Iran.

PRAMILA JAYAPAL: There is no rationale. I listened to a classified briefing. I can tell you I learned nothing there about whether or not there was any evidence that was about an imminent threat. There was nothing that justified the assassination of General Soleimani. And this has been a long time coming. This isn’t just the assassination of Soleimani. Trump has been itching for this war. He pulled the United States out of the JCPOA. He put forward this failed maximum pressure strategy, and then he assassinated Soleimani, and he is using the 2002 authorization of use of military force as his justification. Well, that makes no sense. That does not apply here.

BARBARA LEE: The only way we’re going to stop these endless wars is through the power of the people. People have got to make sure that they let their members of Congress know that they want them to exercise their constitutional responsibility in the matters of war and peace, and debate and vote up or down as it relates to the use of force and hold them accountable. If they don’t do that, then the polls, the elections are coming up.

ILHAN OMAR: I mean, my concern really is to really figure out how do we continue to engage peacefully around the world. We’ve had opportunities to stay with the nuclear agreement. We’ve made a choice to take ourselves out of that. That created an escalation of war. That created an escalation of tensions, and we want to make sure that we understand the consequences of his decisions like that, and we are now living with those decisions, and so it is up to us to make sure that we are pushing for a more deliberative, more cautious, more righteous process.

PRAMILA JAYAPAL: There’s this idea that somehow war is going to be a good investment for us. It never is. We have to go to diplomacy, not to military solutions. We have to make sure that we are investing in our own people. In this war alone, the estimates are trillions of dollars that we will spend, even on a limited war with Iran, and think about what that means for people. It means less money for education, less money for healthcare, less money for infrastructure, less money for our lives here, but most of all, it means more devastation for the rest of the world. We cannot continue to have these wars, endless wars where the people that get hurt are the people, children, mothers, fathers, families, our troops, but also the people of countries around the world.

JAISAL NOOR: The protests are happening despite what appears like an easing of tensions by President Donald Trump on Wednesday, a week after the killing of Qasem Soleimani, a top Iranian general in a US drone strike, what many have called an assassination. As we are recording this, the House is debating a War Powers Resolution that would limit Trump’s power to wage war on Iran, but some say it doesn’t go far enough. We asked Democratic lawmakers for their thoughts. And some people have said that the measure being proposed now doesn’t go strong enough, because it doesn’t have power to really rein Trump in. What’s your response to critics that say this isn’t strong enough?

BARBARA LEE: Well, it may not be the strongest, but I’m voting for it because we have to make sure we get the votes to pass it. We should have a bipartisan vote on this with Republicans also. I’m not sure if we will or not, but you have to have everybody voting for something. And so I would want to see it stronger, but I don’t think we can say no to something to make progress.

PRAMILA JAYAPAL: Well, we also need to pass the repeal of the authorization of use of military force, and we also have to make sure that we are stopping the power of the purse, stopping people from using money, using our congressional power of the purse to stop the use of money for these wars.

JAISAL NOOR: Well, what do you say to the people that say the War Powers Act doesn’t go far enough in being able to actually stop Trump from further escalations?

PRAMILA JAYAPAL: Well, I think that we are learning the limits of a lot of things, from our Constitution to the War Powers Act. And I do think we need to make sure that we look at rewriting and renewing some of these tools, because I don’t think the framers envisioned that there would be a… They envisioned a person who would abuse power and deny the Constitution, but they did not envision an entire party that would follow in the footsteps and bow down to person over country and put their loyalty in a place that would harm our country.

JAISAL NOOR: Do you have a message for Democrats that have supported the AUMF in the past, or have gone along with it?

RASHIDA TLAIB: It’s really important to know people like myself and others that really understand the impact of war. We are now running for office, and we’re winning. We’re not going to compromise on people’s lives, and we know now… I know, for instance, myself and others that really ran on no more war and promoting more peace, more towards really trying to better the lives of people right here at home. And we do that by recognizing–for me, I know, as a humanist–recognizing the human suffering that comes with war. And I think for me it’s not about… My presence alone here is enough for me to start getting my colleagues to understand the importance of promoting an antiwar movement.

JAISAL NOOR: We also talked to retired Colonel Ann Wright about her thoughts on who is ultimately responsible for the US war footing.

COL. ANN WRIGHT: Yeah, the Democrats are just as responsible as the Republicans are for the lack of a strong Congress. That they are manipulated by whoever the senior leadership is of the Congress. And if it’s a Democratic president, then he has led the Congress, and then the Republican the same way. And so they bow to the leader of the party, who’s the president of the country, and brush aside that thing called the Constitution. So it’s not like Trump’s the first one to try to pull this sort of stuff.

And thank goodness that now we’ve got some of the Congress that’s saying that authorization for military force, AUMF, that was passed in 2001, maybe we ought to have something else. Said, “Here it is, 18 years later, 19 years later, and the Congress really has not debated it again since then.” And they’re using that 2001 AUMF to justify anything they want, rather than on each individual case, passing an authorization for the use of military force for that specific incident.

From the Streets to the Halls

February 13, 2020
Sign Up for Our Newsletter
Help Us Make Real News!