Media Repression in Honduras Speaks to U.S. Congress, but is anyone Listening?

TRNN speaks with the director of Honduran Radio Progreso about the state of terror that has killed more than twenty-five journalists in Honduras over the last three years as he waits to testify before the Human Rights Commission.

TRNN speaks with the director of Honduran Radio Progreso about the state of terror that has killed more than twenty-five journalists in Honduras over the last three years as he waits to testify before the Human Rights Commission.

The Deadliest Place in the World for a Journalist 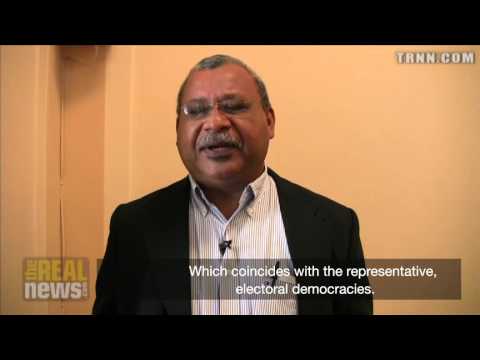 NOAH GIMBEL: Iâ€™m here at the Rayburn House Office Building on Capitol Hill, where the Tom Lantos Human Rights Commission is holding a congressional hearing on press freedom in some of the most dangerous countries in the world for journalists.

One of those places is Honduras, where 25 journalists have been killed by both the state and organized crime syndicates since the 2009 coup that overthrew president Manuel Zelaya. According to the United Nations Special Rapporteur for the Freedom of Expression and Opinion, â€œin proportion to its population, Honduras has the most alarming violation of the freedom of expression in the world, and is the country in which the most journalists have been killed in the least amount of time.â€ Up to now, the U.S. has remained largely silent on the state of violent repression in Honduras â€“ a key ally in the so-called War on Drugs.

But two congressmen heard testimony on the situation in Honduras, as well as in Russia and Turkey, as the Congressional Human Rights Commission called the hearing to gather testimony for the Global Online Freedom Act currently in the works. Republican Congressman Chris Smith explained the goals of the act.

SMITH: This bill will prevent the export of hardware or software that could be used for surveillance, tracking, blocking and the like, to internet restricting countries.

GIMBEL: The opening statements of the Commissionâ€™s Chairman, Massachusetts Democrat James McGovern, reflected the Actâ€™s objective to focus on abuses committed by the USâ€™s geopolitical adversaries.

MCGOVERN: Unfortunately, the media is under attack in many places. Authoritarian regimes in countries like China, Russia and Iran, are developing increasingly sophisticated tools to keep media under their control, and to punish journalists who refuse to tow the official line.

GIMBEL: But despite the apparent use of the issue of free expression to target U.S. rivals, the commission also heard testimony from Honduran human rights advocate and radio broadcaster Reverend Ismael Moreno Coto. His testimony on the ill state of press freedom in Honduras, and on U.S. complicity in state repression was received politely by the commission, but without any concrete responses as to how the U.S. might pressure the Honduran government to curtail the violent repression of critical voices.

Known to Hondurans as Padre Melo, Moreno has been recognized by Reporters Without Borders and the Global Media Foundation for his continued perseverance in the face of continuous threats and attacks. Just two weeks ago, Honduran radio journalist Adonis Felipe Bueso GutiÃ©rrez was shot dead with two of his cousins.

The Real News caught up with Padre Melo prior to his testimony for an in-depth look into the state of free speech in Honduras.

MORENO: Freedom of expression has always been precarious in Honduras, especially over the last 30 years, which coincides with representative electoral democracy. However, since the coup, that is, over the last 3 years, the deterioration of freedom of expression has been so great that in this small period, the assassinations we have mentioned have taken place, and moreover, many journalists have felt obliged to censor themselves.

And when you seek answers to the demands for freedom of expression, what you get is a hardening of the laws. Right now, Honduras has enacted legalized phone surveillance and control over private internet accounts.

Using the â€œwar on drugsâ€ as justification, what this type of law does is control the social and political opposition â€“ all types of opposition to the Honduran state.

GIMBEL: And despite the well-documented record of police brutality and state-sponsored violence in Honduras, the U.S. has only strengthened its support for the regime since being among the first countries to recognize the coup government. In 2012, the Obama Administration increased military Aid to Honduras.

MORENO: The role of the U.S. government has always been ambivalent in Honduras. In public, officially, it has always opposed coups, and recriminated all infringements of free expression. Also, formally, it has expressed concern over the violence and impunity that dominates in Honduras.

However, in practice â€“ and hereâ€™s the ambivalence â€“ they keep strengthening the ones responsible, the leadership that facilitates impunity, and they continue to favor the leadership of the biggest human rights violators. They continue, for example, to support the police, whom they well know to be in the service of criminality.

And they continue to support in various ways the institutions bearing the highest responsibility for the coup: the Attorney Generalâ€™s Office and the Supreme Court. What we would ask is that the U.S. condition clearly and with visible benchmarks all military and police aid to those institutions that have shown unequivocally to be compromised by human rights violations, impunity, and repression against Honduran social sectors.

GIMBEL: Whether Washington will listen to the concerns of the Honduran people has yet to be seen. For the Real News, Iâ€™m Noah Gimbel in Washington.