The military coup government of Roberto Micheletti is coming under increasing economic pressure to concede power, whether from holds on US humanitarian aid and World Bank loan money or the sealing of the borders by all three neighbors. On the political front, it has yet to be recognized by a single foreign government. And domestically, it has resorted to the tactics of Central America's dark past to crush the people's angry response to the coup. Beatings, curfews, spot-checks, censorship and death threats. Honduran human rights advocate Bertha Oliva believes that the actions of the 'golpistas' (coup leaders) can only be explained as a reaction to the growing demand for citizen participation in Honduran politics. Though the Golpistas have sought to make their actions appear necessary to defend the republic from a power-hungry President, Manuel Zelaya, Oliva tells The Real News that the real story is the opposite. That it is they, as the polical-economic ruling class, that are afraid of losing their power to an increasingly engaged citizenry.

The military coup government of Roberto Micheletti is coming under increasing economic pressure to concede power, whether from holds on US humanitarian aid and World Bank loan money or the sealing of the borders by all three neighbors. On the political front, it has yet to be recognized by a single foreign government. And domestically, it has resorted to the tactics of Central America's dark past to crush the people's angry response to the coup. Beatings, curfews, spot-checks, censorship and death threats. Honduran human rights advocate Bertha Oliva believes that the actions of the 'golpistas' (coup leaders) can only be explained as a reaction to the growing demand for citizen participation in Honduran politics. Though the Golpistas have sought to make their actions appear necessary to defend the republic from a power-hungry President, Manuel Zelaya, Oliva tells The Real News that the real story is the opposite. That it is they, as the polical-economic ruling class, that are afraid of losing their power to an increasingly engaged citizenry. 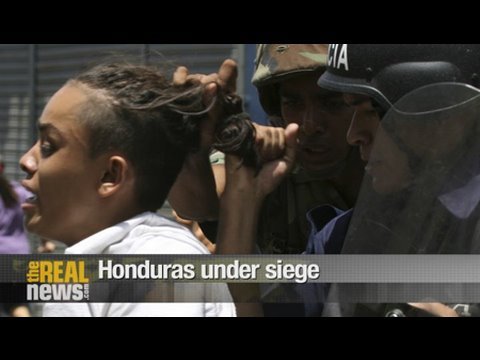 JESSE FREESTON, TRNN: Seventy-two hours—that’s how long the Organization of American States gave the leader and acting Honduran president Roberto Micheletti to return power to elected president Manuel Zelaya. That time will expire on Saturday, at which point the government would face expulsion from the OAS. Such a move would bring further consequences and isolation upon the military government that has already seen the World Bank hold a $270 million loan, the US government pause part of its humanitarian aid program. And all three bordering countries—El Salvador, Nicaragua, Guatemala—have sealed their borders, halting all trade with Honduras. Furthermore, not a single foreign country has officially recognized the coup government, and the UN General Assembly voted unanimously on Tuesday to demand the restoration of Zelaya as president. With what appears to be the entire world against him, Micheletti and his military backers have remained defiant.

ROBERTO MICHELETTI, INTERIM PRESIDENT, HONDURAS (SUBTITLED TRANSLATION): He already committed crimes against the Constitution and laws. He can no longer return to being president of the republic, unless some Latin American presidents put him back in power with guns.

FREESTON: We spoke to renowned human rights advocate Bertha Oliva, who spoke to us via telephone from the Honduran capital of Tegucigalpa.

BERTHA OLIVA, FOUNDER AND COORDINATOR, COMMITTEE FOR THE DISAPPEARED (SUTITLED TRANSLATION): I am living through a tough time that one can only experience under a military dictatorship. They’ve suspended our personal freedoms, and now they are using the Army to repress the public reaction to that at the request of a man who declared himself president. It’s shocking how today at 10:30 in the morning, in San Pedro Sula, there was a march that combined calls for Zelaya’s return with calls for the recognition of our personal freedoms. They broke it up as only they can. They view those who demand their rights as if they were enemies. And we are at war.

FREESTON: The government has announced the suspension of certain constitutional freedoms, which among other things give the police the right to enter people’s homes during curfew hours and detain them without charges.

ROLANDO DUBON, CONGRESSMAN, LIBERAL PARTY (SUBTITLED TRANSLATION): There are many restrictions on personal freedom at the moment. You can be detained for 24 hours without being charged. But you still have your freedoms of speech and expression.

ANTONIO RIVERA, CONGRESSMAN, NATIONAL PARTY (SUBTITLED TRANSLATION): During the day, you can exercise all the rights you’ve always had. But between 10 PM and 5 AM, some rights will be limited, above all freedom of assembly and mobility rights.

OLIVA: They’ve made a return to the 1980s. When we had the national security doctrine, the country was militarized. We had to tell the soldiers where we were going and what we were doing. This is exactly what happened to me yesterday at the Supreme Court—there were troops outside, demanding explanations for where we were going. The reason this experience is reminding us of that time is because they brought us back to when they wanted us to feel like they could dispose of our lives, rights, and freedoms. And friendly governments who hold democratic ideals simply cannot allow this to happen here. Democracy is not a word; democracy is actions.

FREESTON: There have been mass protests in support of the coup government as well. But Oliva believes that these are being manufactured in a climate of misinformation.

OLIVA: I believe that he can mobilize lots of people, he can organize lots of demonstrations, even very big ones. But it’s not because this is the will of the people there; it’s because they’re forced to attend, or else they get fired. If not fired, they are persecuted. Don’t forget, these guys have the money and the power to coerce people. They continue getting bolder, confusing the public opinion by creating an information blackout, since they themselves are the owners of the media companies. And according to radio managers, there was an order today that if anyone were to continue calling the events of June 28 a coup d’état, they would have been detained and imprisoned. Some local radio stations were shot at. They threatened the children of the owner of the station in Olancho. And while the people here are marching demanding the return of President Zelaya, as well as the restoration of legality in our country, they are persecuted, threatened, and beaten up. But the marches that the coup government is organizing are accompanied by the same soldiers that are violating human rights, who have committed crimes against humanity. They are organizing the marches. This should give you an idea what’s going on in our country.

FREESTON: Many have called on the US and others to withhold all humanitarian aid and impose economic sanctions, while others have claimed this would only punish the people of Honduras. Oliva, however, is supportive of such actions.

OLIVA: The governments of the world that are friends of Honduras and enemies of violence and illegality must take whatever actions they can to thwart a dictator.

FREESTON: So what drove Micheletti and company to take such a decisive action in the first place? After all, their central accusation against Zelaya is that in seeking a nonbinding nationwide survey of constitutional reform, he broke that same Constitution. They contend that Zelaya’s goal was to remove the existing prohibition on presidential reelection, something Zelaya denies. Oliva believes it’s the people, not Zelaya, that frighten the Honduran elite.

OLIVA: They were scared of submitting to the people by way of referendum. In my opinion, the system that they’ve designed to conceal and lie to the democratic world is collapsing. The world knows that Honduras is sorely lacking in democracy. Here a legal democracy was installed, but not a participative one. That’s what scares them. I don’t believe they can convince anyone in the world that’s intelligent that what they’ve done isn’t a coup d’état, and neither will they be able to convince anyone that the goal of the survey was to lengthen Zelaya’s term restrictions. They were afraid of the participation of the people.

FREESTON: Zelaya has promised to return to Honduras this weekend, once the OAS deadline expires. It is rumored that he will be accompanied by OAS president José Miguel Insulza, Ecuadorian President Rafael Correa, Argentine President Cristina Fernández Kirchner, and President of the UN General Assembly Miguel d’Escoto Brockmann.

LUIS RUBI, ATTORNEY GENERAL (SUBTITLED TRANSLATION): He will be detained and brought to trial in Honduras. We will continue with the appropriate process—don’t have the slightest doubt about this. If we add up all the different crimes, he could get, oh, 20 years in prison.

OLIVA: This must be well thought out. But the truth is that the more time he gives the coup leaders, the more settled-in they will be. They are swearing in their cabinet in a rush. And I imagine they are planning on filling the cabinet so they can have room to negotiate with President Zelaya. And I believe that justice cannot be negotiated. They executed a coup; they belong in jail. No amnesty. Because if they are granted amnesty, that would only create another extension of impunity in Honduras, because nobody has ever been punished here for violating the Constitution and its laws. That’s why these people feel so arrogant, so audacious, that they believe that nothing can ever catch up with them.

Bertha Oliva is the General Coordinator of COFADEH, the Committee of Relatives of the Disappeared and Detained in Honduras. Bertha Oliva’s husband, professor Thomas Nativí was “disappeared” in 1981, during the period when the death squads were active under Honduras’ military dictatorship. She founded COFADEH together with other women who lost their loved ones, in…