Despite protests, the Israeli government will displace the Bedouin population of Umm al-Hiran to a temporary area until a new neighborhood is built for them nearby. However, residents won't be welcome to return to the new Jewish-only city of Hiran

Despite protests, the Israeli government will displace the Bedouin population of Umm al-Hiran to a temporary area until a new neighborhood is built for them nearby. However, residents won't be welcome to return to the new Jewish-only city of Hiran

The Real News on the Middle East 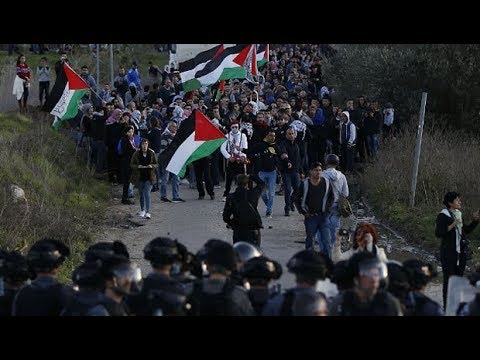 SHARMINI PERIES: It’s The Real News Network, I’m Sharmini Peries coming to you from Baltimore. The government of Israel recently announced that the evacuated population of the Bedouin town of Umm al-Hiran will be displaced to a temporary area. They will be forced to remain there for some 15 years while a new living area is found for them. Meanwhile, the town of Umm al-Hiran becomes the construction site for a new settlement town. The first article in the charter of this new town specifies that only observant Jews may apply to buy or rent an apartment there. In January, as protestors tried to prevent the demolition of Umm al-Hiran, Israeli police opened fire and killed a local school teacher, Yaqoub Abu al-Qiyan, who was attempting to peacefully leave the area. We interviewed, here at The Real News Network, one of the demonstrators, Kobi Snitz, let’s have a listen.

KOBI SNITZ: This is not the first time that entire villages are demolished in the Negev long standing government policy. The fact that the state is demolishing a Bedouin village to build on top of it a settlement for Jews tells us everything we need to know about Israeli policy and the context for this and very much about Israeli politics in general. And it played out as you would expect from the security forces that does this.

SHARMINI PERIES: Now joining us to talk about all of this is Haia Noach, she’s the Executive Director of NCF, the Negev Coexistence Forum. Thank you so much for joining us today, Haia.

SHARMINI PERIES: So, Haia, let’s start off by just explaining to people how is it that legally that this is possible that the Israeli government could just evacuate a Bedouin population and build a Jewish-only town on top of it. Is that even allowed? This is like the apartheid.

HAIA NOACH: Well, legally, they’re covered. The thing is morally if they’re covered. It seems that the question is not a legal question, but a moral question since these people are living there in the village of Umm al-Hiran for 56 years, without any basic services, without electricity, without running water and so forth. And now, when the state decided to establish a new village there, a new town, they actually designated it for Jews mainly. Now, the option was there to plan part of this new village of Hiran as a neighborhood for the Bedouin people that are living there for so many years, but the state preferred, meanwhile, to leave it this way. And to plan temporary housing for the Bedouin in the new town or township of Hurah which is located about 8 km south of Umm al-Hiran.

SHARMINI PERIES: So tell us a little bit about your own organization, the Negev Coexistence Forum. Have the joint efforts on part of Jewish community and the Bedouins living there been able to be effective?

HAIA NOACH: Well, NCF is a Jewish-Arab organization and we are working here in the last 20 years trying to build a shared community of Jews and Arabs and to spread around the civil equality. It’s going very difficult, especially in the last couple of years since all sociology of Israel is changing and such operation are really difficult but still, we’re doing it. We have volunteers that are coming with us to this adventure and students and so forth. And we are working with the Jewish community but also with the communities abroad by raising awareness to what is going on in the Negev, since 34% population of the Negev are Arab-Bedouins. So it’s time to do some justice to this community and this is what we’re trying to do, to bring the state to recognize these villages, which are about 35 villages, that are unrecognized by the state. And so the state sees them as illegal. And they have no basic services, very small part of the villages do have education systems and clinics, about four clinics, but generally speaking, those villages are living without basic amenities and with a lot of infringements of human rights, house demolitions and so forth.

We’re trying, actually, to raise the awareness that those are citizens of Israel and we should really treat them otherwise.

SHARMINI PERIES: Right, now, there’s been a critique. Some people say that the word “coexistence” actually means to repress Bedouins and Palestinians, to pressure them into accepting the conditions imposed by the Israeli government. Is this correct and what’s your response to that?

SHARMINI PERIES: I suppose those who critique you, who are trying to assist in the situation, is really responding to the brutality of the Israeli police in Umm al-Hiran, the killing of Yaqoub Abu al-Qiyan who worked with the Bedouins, who was a teacher … I guess, it’s a difficult situation. But you were saying people should come and see what you’re doing, we’re not actually able to do that so can you describe to us the kind of work you’re doing?

HAIA NOACH: Well, we have more than 1,000 people coming every year with the very critical tours that we’re giving, also to diplomats and to activists that are coming from abroad but also to students and youth from Israel, which is quite a large amount of people. We are writing a very critical report about what is happening here, either about demolition or we have a monitoring report, every year, we are issuing the report. By the way, in 2016, more than 150,000 structures were demolished. It’s a huge number, it’s a huge number. Thousands of people are losing their houses each year and this is something that we’re focused on but also some other reports, we have a very good website, which probably is the only place you can see the villages. If you’re going into the website, you can read about the village and you actually can have the feeling of what is happening on the ground. We have many projects, in the unrecognized villages, of documentation, like, we are giving still cameras to women in the villages and they’re documenting their own life. And these pictures, we are using for lobbying.

In a way, the women are coming also to be part of this conflict between the state and the Bedouin, which mostly is done by men. And this way, women are participating. Also children, which we have projects with them, in the different villages. We give them cameras and they’re documenting their lives. We have, also, a video project where women and men are documenting lives to video, they’re documenting house demolitions, police aggression, we can say, in the villages and many other things that are documenting. And in this way, we are able to bring the people to the front, so they’re lobbying for their lives there. And we have a cultural center in Besheeba, a Jewish-Arab cultural center, which is working in the last 10 years. We really have many, many projects that we’re doing on the ground.

SHARMINI PERIES: Haia, can you also tell us something about the recent court decision regarding another Bedouin community in Negev, the Al-Araqeeb, I think, village, which was demolished over 100 times forcing the residents to pay for the cost of demolishing their own village. Just tell us a little about that. What’s the status of it now?

HAIA NOACH: Well, they charged with 1.8 million shekels, which would be more than $400,000 – $450,000 for the eight demolitions. The first eight demolitions that occurred between end of July 2010 and end of December 2010. The police calculated how much it cost to operate all this operation and they came out with the figure 1.8 million shekels. And they charged in 2011, the residents, 34 people from the village with this huge sum of money. And during the hearings, part of the people compromised and got some funds and paid something and now, the judge decided to charge 250,000 shekels from all the six residents that are now on this petition, and to fine them with expenses of 100,000 shekels. It was last week and the people from Al-Araqeeb were quite exhausted because they have many, many legal procedures from all directions. And they’re paying to lawyers, and to need expert opinion in their land trial, which hardly started.

So it’s a heavy fine, it’s a very weird petition from the state because the police do have a budget. We are paying part of our taxes for the police to be able to enforce the law, of course. And so, it’s very weird that they’re charging people now with the expenses of the eight demolitions. But we know that in the last couple of years, it’s a precedent that trying to build in a way. So in every demolition now, even before demolition, the police is coming and threatening people with fines. And they’re saying, “if you do not demolish, we will demolish but it will cost you more money.” So it’s a really problematic issue because today more than 60% of the people are demolishing the houses by themselves.