Café Guancasco, a favorite of the coup resistance movement, sees concert attacked by police and military

Café Guancasco, a favorite of the coup resistance movement, sees concert attacked by police and military 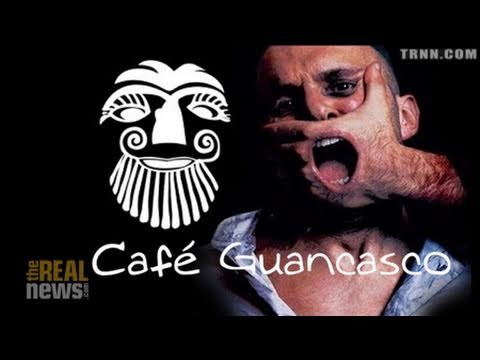 JESSE FREESTON, PRODUCER, TRNN: Post-coup repression in Honduras reached a new low last week with the targeting of a concert of the band Café Guancasco, a musical favorite of the coup resistance movement. It took place on September 15, anniversary of the independence of Central America from the Spanish Empire. For the second year in a row, the holiday became a focal point for the Honduran resistance to the June 2009 military coup against the movement to rewrite the country’s constitution and against then-president Manuel Zelaya. This September 15 saw massive anti-regime marches in the capital of Tegucigalpa and the country’s second-largest city of San Pedro Sula. It was in downtown San Pedro Sula where a midday concert by Café Guancasco was attacked by the police and military. The Real News spoke to Pavel Núñez, lead singer and guitarist for the band.

PAVEL NÚÑEZ, VOCALS/GUITAR, CAFÉ GUANCASCO (SUBTITLED TRANSLATION): Under the slogan "What independence?" the day’s resistance march ended with a Café Guancasco concert. Ten minutes after the concert began, the first tear gas canisters landed on top of us, the musicians of Café Guancasco.

FREESTON: Carlos Roman, a percussionist with another band, Montuca Sound System, was playing with Núñez on stage when the attack began.

CARLOS ROMAN, PERCUSSIONIST, MONTUCA SOUND SYSTEM (SUBTITLED TRANSLATION): Nobody could believe it. Everyone thought the gas was a special effect. Three police officers attacked me with batons. They never asked me anything. Just took out their batons and hit me.

NÚÑEZ(SUBTITLED TRANSLATION): They brought in the water cannons and doused all our instruments and equipment. Some soldiers jumped on stage. They smashed our stuff, knocked over speaker towers, and stole equipment.

ROMAN(SUBTITLED TRANSLATION): We threw everything we could into the truck to get it out of there before they could destroy everything.

FREESTON: The artists are trying to raise $30,000 to replace the equipment, most of which was rented.

ROMAN(SUBTITLED TRANSLATION): I was dripping blood, and then I realized that my head was split open. I went to the hospital to get five stitches in my head.

NÚÑEZ(SUBTITLED TRANSLATION): A lottery ticket vendor in the park, who was only trying to work, died from the inhalation of tear gas.

FREESTON: Núñez urges people not to treat these events as an isolated incident but part of the ongoing repression of the country’s popular movement.

NÚÑEZ(SUBTITLED TRANSLATION): Since June 28 of last year, when the military coup took place, since that day, a wave of repression has been unleashed on our people. We already count more than 100 or 200 people murdered. In January, they tried to clean up the image of the coup by changing the government. Porfirio Lobo Sosa took over as president. The world was sold the idea that with this man the situation had changed, that the coup was over, that there was no more repression. But since Lobo took power, the wave of criminality, the wave of repression, the wave of murdered members of the National Front of Popular Resistance has continued; even worse, it has increased.

FREESTON: This has included military occupations of two universities, regular assassinations of community organizers, including last week’s murder of nurse union president Juana Bustillo and the murders of at least eight journalists since Lobo took office, with no charges laid and little sign of meaningful investigation. In the case of anti-coup journalist Nahúm Palacios, authorities only dug up his body to do the autopsy three months after his funeral. Cases like these led the Committee to Protect Journalists to label Honduras as the most dangerous country in the world to report in in the first half of 2010, as it accounted for roughly a quarter of the world’s murdered journalists.

NÚÑEZ(SUBTITLED TRANSLATION): But the events of the 15th are the worst, the most fascist of the last year, because they didn’t attack a mobilization or a riot, they attacked a peaceful music concert.

FREESTON: Many Latin American governments, including Brazil, have yet to recognize Lobo’s presidency. But in spite of the newest attacks on a concert, the United Nations leadership and the United States government have continued their efforts to have Lobo recognized as Honduras’s leader. This included his first appearance as president in front of the UN General Assembly on Monday and a Thursday dinner with US President Barack Obama.

NÚÑEZ(SUBTITLED TRANSLATION): We saw the dictator president, as we call him, making declarations about human rights at the United Nations.

PORFIRIO LOBO SOSA, HONDURAN PRESIDENT (SUBTITLED TRANSLATION): We must confirm our commitment to the fundamental values of freedom for all the men and women on the planet, equality of rights and opportunities, solidarity with those who suffer the most, tolerance of our diversity of beliefs, culture, and languages.

FREESTON: Both UN Secretary-General Ban Ki-moon and the US State Department continue to hold up the regime’s truth commission as evidence that Honduras has normalized. But all six of Honduras’s independent human rights monitors have rejected that commission and instead launched their own. Heading the regime’s commission is ex-Guatemalan vice president Eduardo Stein. During a visit to Washington, DC, in May, we asked Stein whether he would abandon the commission if the conditions didn’t exist on the ground.

EDUARDO STEIN, COORDINATOR, HONDURAN TRUTH COMMISSION: If we find that there are no conditions under which the commission can indeed carry on its work with independence and autonomy, we would be very sorry, but we would have to dismantle the commission.

NÚÑEZ(SUBTITLED TRANSLATION): I’m not sure how much more repression they need to see. Since the coup, the resistance has raised the banner of peaceful struggle [snip] a fight of solidarity, consisting of organizing marches in the streets. The truth is that right now we’re not sure what path to take. We continue the human rights monitoring and international denunciations. The organizational struggle continues through education and mobilization. Nevertheless, if they continue killing us and beating us in the streets, personally, I don’t know what will happen.

FREESTON: Roman laments that it’s not only outside Honduras where silence reigns, but inside as well.

ROMAN(SUBTITLED TRANSLATION): The press still doesn’t describe what happened. They just say that the police had to calm down the demonstrators. And when the press doesn’t mention it, it’s like it never happened.

FREESTON: Roman says that the event has changed him greatly.

ROMAN(SUBTITLED TRANSLATION): My band doesn’t have a clear or radical political position like Café Guancasco, but we share the music as an expression of art. Art is one of the ways that societies have developed. What musicians and poets say and write is a reflection of their reality. And stopping them from saying it is a violation of one of the most important rights we humans have, freedom of expression.

NÚÑEZ(SUBTITLED TRANSLATION): Members of our band have received personal death threats. We are giving the international community advance notice that whatever happens to our friends, or to any artist for that matter, we declare this dictatorship directly responsible. We call on the artists of Latin America and the world to take sides with our people. If the coup in Honduras was a coup against all of Latin America, then the repression of September 15 is the repression of the art of all our peoples. This repression hasn’t shut us up. Even though we don’t have instruments, even though we owe thousands of dollars, we’re already organizing another concert in the same city of San Pedro Sula. It’s on October 21, which is National Armed Forces Day in Honduras. But we’re announcing that that day will no longer be Armed Forces Day. It will be Artist In Resistance Day, a day for all those who are committed to art and culture as a form of consciousness-raising so that our peoples can finally be free.

DISCLAIMER: Please note that transcripts for The Real News Network are typed from a recording of the program. TRNN cannot guarantee their complete accuracy.(SUBTITLED TRANSLATION):