Hilary Lewis of Earthworks says Governor Jerry Brown's state of emergency comes late given the damage incurred, and his leadership on environmental issues suggests he should've understood what's at stake

Hilary Lewis of Earthworks says Governor Jerry Brown's state of emergency comes late given the damage incurred, and his leadership on environmental issues suggests he should've understood what's at stake 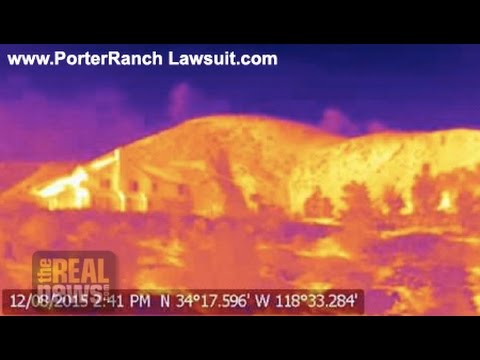 On Wednesday, California Governor Jerry Brown declared a state of emergency over the massive methane gas leak from Aliso Canyon facility. The natural gas storage facility is owned by Southern California Gas Company, near the Porter Ranch neighborhood just 30 miles from downtown Los Angeles. Similar to the BP oil spill in the Gulf of Mexico, which is considered the largest environmental disaster in U.S. history, this one has already emitted a record 80,000 metric tons of methane since October, at a rate equal to the greenhouse gas emissions of 7 million cars every day. It has displaced thousands of people in the Los Angeles area, and while an estimated 110,000 pounds of gas continues to spew every hour, methane, the primary component of natural gas, has 25 times greater impact on climate change than carbon dioxide. It is invisible to the naked eye.

And through the efforts of environmentalists such as our guest today, who documented the leak with infrared cameras, that the disaster has become widely known. Joining me in our studio in Baltimore is Hilary Lewis. Directs communications at Earthworks, a nonprofit organization dedicated to protecting communities and the environment from the adverse impacts of minerals and energy development. Thank you so much for joining us.

PERIES: So, Hilary, now, Governor Jerry Brown is known to be a leader when it comes to the environment, and he campaigned on that basis. So give us a timeline of what has happened and why it has taken him so long to declare a state of emergency and address this issue.

LEWIS: Well, that’s a great question. So the leak began in late October, and shortly after residents were notified. And since then there have been a number of complaints issued. The biggest thing that people are facing in the community is the odor.

So as you mentioned, methane is odorless and colorless. But in order to make sure that if you have a gas stove in your home you don’t leave it burning, they add something called mercaptan so that you know the smell. And this smell has been bothering the community. And so when I was actually on the ground, you know, I’d heard that the smell kind of permeated throughout the community. And I was still surprised that, you know, as soon as I got out of the car I smelled it. And actually, within half an hour of being there we filed a complaint because of the smell being so bad. So that’s been going on the whole time. And things have slowly started to unfold. So in the beginning they started offering people to be relocated, and as of right now I think it’s more than 2,000 families have been relocated. And the two schools in the community, the two public schools, have also been relocated. And this has really been unsettling for the community.

And this whole time, Governor Brown had been kind of absent on the scene and the community had really been asking for him to step in, declare a state of emergency, and take action. And it’s actually ironic, because during this time the Paris climate talks were happening, and Governor Brown was actually there, touting what is one of the, the best climate policy in the country. California has very strong rules to try and attack climate change, but this is one of the worst climate disasters that’s happened in our country.

PERIES: Now, the leak is still continuing. Is there any way to curtail it right now? And what efforts are being made in that regard?

LEWIS: Well, the state of emergency is definitely going to help. Governor Brown has laid out a number of different changes that are going to happen, including more inspections, monitoring. The state itself is going to be using infrared cameras like ours to be able to see exactly where the pollution is, and that’s going to help.

But the technical solutions are very difficult. I attended a town meeting where the company presented basically what were their very limited options to try and shut off this leak. They want to shut off the leak. Everyone wants to shut off the leak. It’s bad for them, it’s bad for the climate, it’s bad for the community. But the technical limitations are pretty serious. This is a very deep well, a very old well. And the safety valve that was supposed to be there was actually taken out in 1979. Which, that just points to the, the much bigger problem of infrastructure in the country. How could this happen, that there was supposed to be a safety check, and it was removed and never replaced? I mean, that’s just a basic problem.

PERIES: Explain that. There’s a safety valve, and safety steps, and they were removed. Who removed them, why, and why were they not replaced?

LEWIS: It was removed because it was broken. So the last inspection that took place at this particular site was in 1976, I believe, and the valve was actually removed in 1979 because it wasn’t working properly.

And so one of the things that Jerry Brown mentioned in his state of emergency is that there need to be more inspections, and these are the kinds of things that are going to be caught. When we find a problem such as a safety valve being removed we need to make sure that it’s replaced, and we aren’t left with this kind of susceptible danger.

PERIES: And give us a sense of how this is impacting the community. Are there any physical damage to the people that experienced this leak for so long, now, and what are the consequences of it on our health?

LEWIS: So I wouldn’t describe it as physical damages, though if you look directly overhead at the facility you can see damages right on the property. So the property is right above town, and that’s where the leak is coming from, and it’s coming downhill into the community.

But in terms of health impact, we’re really seeing the same health impacts that we see across the country associated with oil and gas development. And those include nausea, headaches, nosebleeds, increased incidence of asthma, and those types of things. And there can be other long-term effects. Some of those things are temporary, and particularly in the case of Aliso Canyon I think the community members that I talked to, at least, felt that their health impacts went away as soon as they got out of the situation. Which is great news. You want to make sure that if you’re removed that these aren’t going to be long-lasting impacts.

PERIES: We’re speaking with Hilary Lewis from Earthworks, and we’re going to be continuing this discussion with her, so please join us for segment two.

Hilary Lewis joined Earthworks in July 2011 as the International Mining Campaign Fellow. She first became interested in the mining industry while researching environmental policy in the United States and Europe for ZAG International, a substitute raw materials provider for the cement industry. Her broader commitment to protecting the environment has led her in a…