Pakistan’s Elections More Unpredictable than Ever

With a rebellious youth vote, the media watching every move, and a new radical player to the game, Pakistan's elections come at a critical moment, with instability, political violence and an energy crisis tearing the country apart

With a rebellious youth vote, the media watching every move, and a new radical player to the game, Pakistan's elections come at a critical moment, with instability, political violence and an energy crisis tearing the country apart 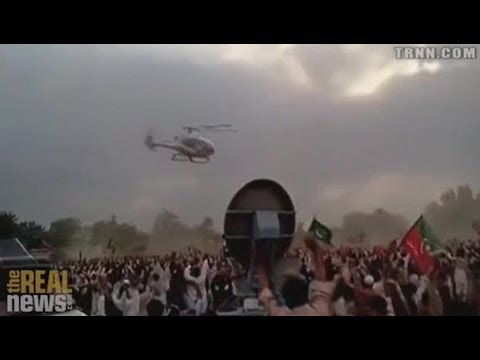 HASSAN GHANI, TRNN CORRESPONDENT: Pakistani politics–unpredictable and always full of drama. This election has been no different. Campaigning has been at a furious pace, particularly by the two front runners–Imran Khan’s Tehreek-e-Insaf party and Nawaz Sharif’s Muslim League (N).

But all of that came to a standstill on Tuesday night, after rising political star, Imran Khan, fell from a platform at a rally in Lahore. Having suffered serious head and back injuries, he made one last push from hospital to galvanize his supporters.

IMRAN KHAN, PAKISTANI PRIME MINISTERIAL CANDIDATE (SUBTITTLED TRANSL.): I did whatever I could. Now I want you to take up your responsibility. On the 11th, consider this your own battle. This is not just mine, but the nation’s battle. You have to change your children’s lot in life. You have to fight for their future. You’ll have to decide whether you’ll continue like this or you’re going to build a new Pakistan.

GHANI: We were filming at his opponent’s rally at the time. Nawaz Sharif decided to suspend campaigning on Wednesday in light of the situation.

NAWAZ SHARIF, PAKISTANI PRIME MINISTERIAL CANDIDATE (SUBTITLED TRANSL.): I pray that he lives a long and healthy life and that he get better and come back into the political arena.

GHANI: It was a rare moment of fair play in an election campaign that has been seriously aggressive on all sides. The two front-runners have been looking to gain votes off the demise of the ruling Pakistan People’s Party. Until his injuries this week, Imran Khan had been storming across the country holding several rallies a day, each brimming with thousands of enthusiastic supporters. His injuries are likely to gain the sympathy of many Pakistanis, and ultimately may help his campaign.

But victory will not come easy. Nawaz Sharif, a seasoned veteran of Pakistani politics, is also working the crowds hard at rallies like this all over Pakistan.

And both candidates are aware of changing attitudes among Pakistani voters, particularly the youth.

LOLPAKISTAN ADVERTISEMENT: I am Pakistan’s youth, and now my vote will prevail.

GHANI: This is one in a series of clips being produced by young people in Islamabad to convince Pakistanis to go out and vote with their conscience–a radical idea in a country where votes are often decided in a bloc by family or community leaders, particularly in rural areas, where feudal politics dominates voting choices. Intimidation and bribery also often play a role.

SYED MUZAMIL HASAN ZAIDI: We love to watch political talk shows. You know, we love to sit there at 8 p.m. every day with the whole family and watch those shows. But what we sort of miss are these tiny details about how the whole system works. And unless you have that particular mindset as to, you know, what exactly you should be targeting to actually bring about that change, you will not be able to, you know, do something–at least something positive

GHANI: The producers of these short films say they started out simply trying to provide hope of a better Pakistan, but the response they got spurred them on further.

SUMAYAH HASAN, CREATIVE DIRECTOR: You would have the mainstream media portray just, you know, one particular side of everything that was happening, and it would kind of bring out the more dark side of everything. So what we tried to do was just to remind people that there’s always good in this world and there’s always hope and, you know, things will eventually come back to [incompr.] That’s where we started out from.

HASAN: The lack of awareness is one of those things which really brings down our country. So these were people who were appreciating the fact that we’re telling them that there’s hope. So we thought, you know, maybe take it up a notch and tell them that, you know, you can actually be a part of bringing in whatever change that you’re looking for.

GHANI: But this new fresh approach to politics is not a phenomenon limited to middle-class Pakistan.

This is the village of Dak Tehal, near the river Jhelum and in the district of Gujrat. It’s about two hours’ drive from Islamabad. It’s harvest time here, and everyone’s busy taking in the crop. But even here in rural Pakistan, politics is high on the agenda.

Here in villages like this, the failure of central government to manage the country properly is painfully evident. Power outages mean electricity is only available for three to six hours per day, and water-borne disease are common. The state education system is near non-existent. With so much at stake and the situation worsening, some villagers are abandoning old tribal and family allegiances and basing their votes on the bigger picture.

IMRAN SHAHZAD, RESIDENT, DAK TEHAL VILLAGE (SUBTITLED TRANSL.): It used to be that the village elder would gather everyone round and tell them who to vote for. And they would say, okay, we are with you. They (the candidates) pressure people by saying, if something were to happen to you, I could help you; if you don’t vote for me, then I don’t know what will happen when you’re in trouble with the police.

But a change is coming in the way people think, especially among the youth. How long has it been–look at their policies, look at what era it is, yet we don’t have electricity. This is a basic requirement for a nation to function. Industry is shutting down.

GHANI: Professor Ishtiaq puts this change in attitude down to broadcast and social media.

PROF. ISHTIAQ AHMAD CHOUDHRY, CONTEMPORARY STUDES, NATIONAL DEFENSE UNIV.: The youth of Pakistan, they are very much active against the traditional politics, against the traditional parties. Earlier, they were not held so accountable before the media. Whatever they were doing, everything was concealed. Now what a politician is doing is very much visible before the public. The people are very much enthusiastic. Perhaps they are determined to bring change, change of system, change of policies, change of style of governance as well. So all these–change does not mean just the change of government, rather the change of the system.

GHANI: Back at the village, Imran’s uncle has seen many governments come and go, many promises broken. He remains sceptical that any administration is going to bring about the genuine change that Pakistan needs, and is pessimistic about the future.

SUFI ALTAF HUSSAIN, POULTRY FARMER (SUBTITLED TRANSL.): They rule the people for their own interests. They’ve done nothing for the people. It’s been so long that we’ve had power outages, unemployment, and no education. No government has had policies which benefit the masses. This is the most agricultural of countries, and yet the government eats all the resources. These words they say are just a pack of lies, and the people fall for it. They’re taking turns. They loot the country, then bring new faces.

GHANI: But, the younger generation, like Imran, have little choice but to remain optimistic.

SHAHZAD: Let’s see what’s ahead. We pray for the betterment of the country, whoever comes. We hope whoever will come will do good–just as long as it’s not Zardari.

GHANI: The result of Saturday’s elections is now more unpredictable than ever. With a new politically active young generation, the media watching politicians closely, and a new radical player to the game, Pakistan’s political establishment can no longer take power and privilege for granted.

With cameraman Arsal Jalib, this is Hassan Ghani for the Real News, Rawalpindi, Pakistan.