Ten years after the largest protest in British history in February 2003, activists examine Britain's legacy in Iraq and the era of continuous warfare

Ten years after the largest protest in British history in February 2003, activists examine Britain's legacy in Iraq and the era of continuous warfare 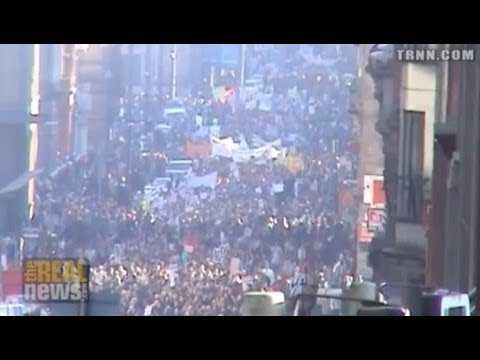 February 15th 2003 saw the largest protest in British history. Like millions of others across the world, the British public said no to the invasion of Iraq. Their government ignored them.

So two million people marched on Britainâ€™s cities, supported by millions more. But Tony Blair still took this country to war on whatâ€™s now apparent was flawed, or even fraudulent, intelligence. Since then Britain, much like the US, has entered an era of continuous warfare.

â€œIt pains me when good people, especially in the United States, who were hostile to wars when Bush was waging them, become passive when Obama wages them.

Today, in a more complex world, and with a so called war on terror that has spread to many more fronts, Britainâ€™s anti-war movement is taking stock.

â€œEffectively what we noticed in the United States today is imperial continuity. More drone attacks on Pakistan and Afghanistan and Yemen and Somalia under Obama than there were under Bush. The President of the United States has now the power, legal power, to order the execution of any American citizen, leave alone citizens from the rest of the world. That is the world we live in.â€

So despite boasting the support of millions, has the anti-war movement essentially failed in its objectives of stopping war, or even affecting change in foreign policy.

â€œI think we did mobilize a lot of people who became very well educated as a result of it. I think we did probably do a lot to stop any direct attack taking place on Iran at that time, or indeed since that time. Of course we didnâ€™t succeed in stopping the wars, but thatâ€™s not a reason to go away, itâ€™s every reason to redouble our efforts and say to people â€˜there is a different alternative way of doing thingsâ€™. We donâ€™t have to arm ourselves to the teeth, we donâ€™t have to have global military reach, we donâ€™t have to steal other peopleâ€™s raw materials and resources, we donâ€™t have to run round the world on behalf of corporate entities. We can instead be a force for moral good in the world by respecting international law and seeking to relate to people rather than the way weâ€™ve increasingly got involved in wars largely on behalf of the United States.

I canâ€™t promise success, but I can say: doing nothing is not an option.â€

It is true however, that while there is no public appetite for further wars abroad, and opposition to Britainâ€™s ongoing military action in Afghanistan has grown, the numbers at public protests have shrunk in recent years.

â€œThere is certainly that opposition. The reality is that at the same time weâ€™re going through a huge economic crisis where often peopleâ€™s priorities are bread and butter issues like housing, jobs, and everyday issues. I think Western foreign policy is something most British people are actually concerned about, and they do oppose those interventions, including the occupation of Afghanistan. But at the same time, at the end of the day, if youâ€™re struggling to heat your home or feed your kids, then there are other priorities.â€

Perhaps one of the most effective tools going forward for the anti-war movement is to highlight the link between the cost of wars abroad and cuts in public spending at home, building ties with the UKâ€™s growing anti-austerity movement.

â€œThe government can always afford to shell out money for wars in Afghanistan, but cuts here where they say these services are not affordable. It just shows that actually we should fighting, instead of waging war on other people we should actually be defending our services here instead.â€

â€œAs long as this system shows us the face of war and austerity, we will show in opposition an anti-war movement and an anti-austerity movement, which brings together, in unity, the only kind of forces that working people really have – their strength in numbers and their capacity to organise. That is what this movement has, in the end, always been about. The struggle for success in the working class movement is the struggle for unity. Without unity we cannot win. In unity we can take down the war mongers and the profiteers.â€

There were also calls to do more to counter the increasing use of drone attacks, which often result in substantial civilian deaths, a tactic which anti-war campaigners argue is counter-productive, and will ultimately increase the risk of terrorism at home.

â€œWhat the Obama administration has done, worse than Bush, is sanitised killing. Thatâ€™s what drones are, that you have men at computers away in America killing people in Pakistan, in Yemen, in Somalia. And the fact that we know, now, that the American President personally sanctifies most of these killings, ticks off the names, including of Americans, I think is an incredibly alienating process. Everybody I know who knows about Yemen and Pakistan says that is creating new terrorists all the time, it would be strange if it wasnâ€™t.â€

Successive British governments have denied that UK foreign policy is one of the root causes of terrorism, despite the 2005 London underground train bombers specifically citing it as their motivation.

â€œYour democratically elected governments continuously perpetrate atrocities against my people all over the world, and your support of them makes you directly responsible.â€

It later also emerged that intelligence officials had warned of blowback from Iraq prior to the invasion.

Also being discussed in London was the fresh push for consolidating western interests in Africa. Activist Explo Nani-Kofi for years oversaw the campaign against proxy wars in Africa, and says todayâ€™s conflict in Mali is the result of a bigger picture of decades old western interference in the region, and a scramble to exploit its resources.

â€œBecause China was also coming in and trying to give, what appeared to be, more favourable conditions to the African countries, it threatened the West. So the West has to go in to ensure that the control they have over these resources over the years, since the Berlin conference, is not lost.

We have to democratise our states, to strengthen the grassroots control on governments and direction of policy. And if we have grassroots organisation control, then we would be able to defend the state.â€

There were several other issues also under the spotlight, but one central to many of them was the westâ€™s continued support for Israel.

â€œWe do understand that the crux of the problem in the Middle East today is the Palestinian-Israeli conflict, and all other problems are transient, theyâ€™re not going to stay there, we know that. When is the international community going to understand that they cannot the victimiser and the victim on equal footing, when they talk about this conflict.â€

Looking back at Iraq and 2003, Sami Ramadani opposed the regime of Saddam Hussain. But he also opposed the invasion. Ten years on, he says the US and the UK have left a poisonous legacy behind. And looking forwards, he warns others seeking to overthrow despotic regimes not to allow their struggle to be hijacked by western interests.

â€œI was an exile of Saddamâ€™s regime. We struggled against his regime for 35 years of Baâ€™athist rule. But the question is always posed: would intervention and imperialist backed change bring anything good for the people, would it improve the situation? No. My view was, and the view of most Iraqis overwhelmingly, was no. Saddamâ€™s regime is a terrible dictatorship, but this alternative of backing US-led intervention would bring an even bigger disaster to the Iraqi people. And similarly if that war is to be launched on Iran, and so on. And similarly their attempt to divert the struggle of the Syrian people for democracy into darker channels.

So you have a choice, in a sense. You stay opposed to dictatorship, you stay with your people demanding democracy, but if you donâ€™t link that to opposition to imperialist intervention then the struggle will be led into a bind alley.â€