On the 35th anniversary of the 1979 Iranian revolution, Scholar Hamid Dabashi explains why even though a diverse set of forces overthrew the brutal, CIA-backed Shah of Iran, in the end theocracy dominated, leaving Iran in the hands of plutocrats.

On the 35th anniversary of the 1979 Iranian revolution, Scholar Hamid Dabashi explains why even though a diverse set of forces overthrew the brutal, CIA-backed Shah of Iran, in the end theocracy dominated, leaving Iran in the hands of plutocrats.

Hamid Dabashi on the Middle East 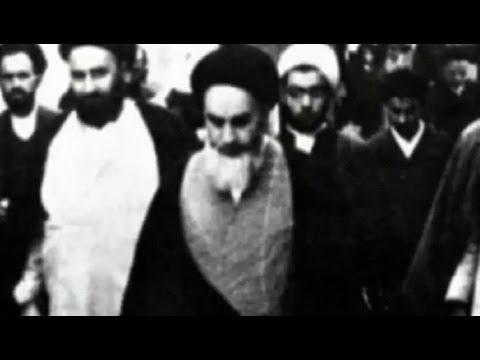 Iran is observing the 35th anniversary of the 1979 Revolution, when the CIA-sponsored Shah was replaced by Ayatollah Khomeini, and the establishment of Iran as an Islamic republic. It was a pivotal moment for struggles across the Middle East. It’s also nearly 35 years since the U.S. began introducing sanctions against Iran.

Here to discuss this historic moment is Hamid Dabashi. Hamid is a professor of Iranian studies and comparative literature at Columbia University.

Hamid, thank you for joining us.

DESVARIEUX: So, Hamid, we often hear the revolution being called the Islamic Revolution. Can you actually deconstruct that?

DABASHI: In fact, that’s the best question and the best place to start. Involved in the mobilization of masses of millions of people in order to topple the monarchy of the Pahlavi regime were also socialists, were also anticolonial nationalists.

Historically, you can begin the narrative that led to the 1977-1979 Revolution either with the nationalization of Iranian oil in early 1950s by Mohammad Mosaddegh, which gives the revolution a potent anticolonial nationalist element, which, as you just referred in your introduction, resulted in a CIA-sponsored coup of 1953 that toppled the democratically elected Mosaddegh and brought Shah back to power in 1953. But if you begin in 1963, when the ayatollah, Khomeini, led an unsuccessful uprising against the Shah, you can give it actually an Islamic element. But if you begin with early 1970s, when a very powerful guerrilla uprising, urban and rural guerrilla uprising, was involved in anti-Pahlavi struggles, will have a decidedly Marxist dimension.

So in order to have a comprehensive perspective of Iran early in the revolution, namely, from 1977 to 1979, you need to bring all these three forces, namely, anticolonial nationalism of the Mosaddegh geneology, and Islamist aspect of Ayatollah Khomeini, and, of course, the Marxist element of the–to their party of the 1940s and Cherikha-yi Feda’i Khalq of the 1970s, all involved at the moment of the revolution. That in the aftermath of the revolution, when the Shah toppled, was toppled, Khomeini and his lieutenants managed to outmaneuver the other revolutionary forces and give a decidedly Islamist aspect to the revolution should not be confused with the earliest stages of the revolution. Whether we look at it historically from the 1950s or immediately at the time of the revolution in the mid 1970s, it had multiple aspects, which included, of course, Islamic forces, but by no stretch of the imagination was limited to Islamic forces.

DESVARIEUX: And, Hamid, after Ayatollah Khomeini rose to power in 1979, how did relations change between the U.S. and Iran?

DABASHI: Well, the relation changed, because all the oppositional forces, including the Islamic forces, were united in their disapproval of the cozy relationship that the Shah had developed in the aftermath of the coup of 1953 with the United States. And in effect the entirety of Iran was a major military base for United States’ regional interests. And, in fact, Iran was even used as a strategic point during the Vietnam War. But also economically, during the Arab oil embargo of 1973, Iran did not join the embargo. And as a result, in the mid 1970s, Shah’s income from the oil revenue skyrocketed into masses of millions of dollars, which he reinvested in the American arms industry and AWACS, for example. You’re too young to remember AWACS, but historically you know AWACS, this radar-carrying aircraft, were in fact developed with the money that Shah gave to the American military establishment at the time from the oil revenue that he had in the aftermath of the Arab oil embargo.

DESVARIEUX: Okay. Let’s fast-forward to present day. Give us a sense of the theocracy. Discuss with us what is it actually like. Who’s in power? Break that down for us, please.

DABASHI: You have to remember that in at least the first decade of the revolution, that is, from, say, 1979 to 1989, until the death of Ayatollah Khomeini in 1989, the Islamists spend, initially, the 444 days of hostage crisis, and after that the eight-year war between Iran and Iraq, in order to eliminate all their rivals. These elimination included mass execution of political prisoners, particularly in the 1980s, university purges, cultural revolutions, trying to bring a multifaceted and cosmopolitan political culture under control of an Islamic republic, paramount on which is this idea of Wilayat al Faqih, the absolute authority of a Shia cleric of highest learning, that Ayatollah Khomeini in fact imposed on the Constitution when it was being drafted in late 1970s.

In the aftermath of the death of Ayatollah Khomeini, the theocracy has continued to consolidate its forces and generate a network, an apparatus of military intelligence and security apparatus, over which presides this clerical establishment, the representative of which is Ayatollah Khamenei. And they have in effect occupied the entirety of Islamic Republic’s theocratic apparatus. And the way that they have kept themselves in power is to make themselves very present and very indispensable in the geopolitics of the region.

A quick look at the time of the revolution tells you that Americans and Europeans and their regional allies were very upset with the Revolution of 1979 and began to generate two bumper zones around the Iranian Revolution. One was by arming Saddam Hussein early in the revolution and encouraging him to invade and occupy Iran in 1980, a bloody war that raged between Iran and Iraq in 1980s. And as a result what it did was prevented the spread of the Iranian Revolution into the Arab world. And on the other side they created the Taliban, which–you may remember President Reagan brought the Taliban to the White House and referred to them as the functional equivalent of our founding fathers. So both the Taliban in the east, in Afghanistan, and Saddam Hussein in the west were meant to curtail the spread of the Revolution of 1979. And both these events, especially the Wahhabi Sunni disposition of the movement in Afghanistan, which was meant to do two things, both to expel the Soviets at the time and also to prevent the spread of Shia-inspired Iranian Revolution, succeeded in doing so.

So the Iranian Revolution in effect degenerated inside and became theocratic, as I just said. But these two monsters–namely, the Taliban that degenerated into al-Qaeda and so forth and also Saddam Hussein–later on in the following decades came back, one by invading Kuwait, you remember, that started the first Gulf War, and one by giving birth to al-Qaeda and the terrorist activities of the beginning of early 1990s all the way to events of 9/11.

So Islamic Republic effectively made itself very powerful banking on the follies of U.S. and its European and regional allies–committing one atrocity after another, whether it was by invasion of Iraq, or by invasion of Afghanistan, or by the second invasion of Iraq, in all of which Iran began to cultivate a soft power. And as you see today, it’s exceedingly powerful in Syria. It is powerful in Iraq. It is powerful in Bahrain, in Yemen, in the entirety of the region. And the question of the nuclear issue, as you know, when President Obama called President Rouhani, the least on his mind, on President Obama’s mind, was actually the nuclear issue. Most importantly was to recruit President Rouhani’s support for his projects in Syria in particular.

To make a long story short, today Iran is internally very vulnerable because of the huge movement that began in 2009 in the form of Green movement against his legitimacy, but regionally it can maneuver its forces, its soft power, in a manner that makes it very useful, particularly to Obama administration and its regional allies.

DESVARIEUX: Hamid, I’m so glad you brought up the Green movement, ’cause I want to discuss how it’s been four years, really, since that movement faded from Iran. What struggles do you think remain for Iranian citizens?

DABASHI: In fact to become full citizens and to become capable of changing their administration with element of trust in the government. They didn’t trust the last election, but they invested their trust in Rouhani. There is a minimum of trust in this recent election. And as you see, whether it is internally or regionally, Rouhani is beginning to have a far different administration to Ahmadinejad.

But it doesn’t mean that Iran is now all hunky-dory. There are still political prisoners, prisoners of conscience. The press is not free. Women’s rights issues are very much under pressure. There has just been a labor unrest in Iran which has been severely crushed, and the leaders of it have been arrested and put in jail. Students organizations are under pressure. The three forces that can actually challenge the theocracy are student movements, women’s rights movements, and labor movements. And it is precisely those three movements that the ruling regime is not tolerant.

It has now an administration which is far more palpable in terms of its affinity with popular demands in the figure of Rouhani, but in terms of its infrastructure, which remains theocratic, it has not changed.

However, by virtue of shifting the focus from the internal affairs to the regional issues–as you know, the entire region is in jeopardy, not just in Syria, but in Egypt, in Bahrain, all over the place–Iran can manipulate the geopolitics of the region in a manner that, because it is indispensable to United States interests in the region, can camouflage its internal issues.

DESVARIEUX: Alright, Hamid. In part two of our conversation with you, we really want to discuss the Iranian nuclear negotiations.

So please, viewers, check out part two of this conversation.

Thank you so much for joining us, Hamid.