Dangers of the Proposed Bayer-Monsanto Merger 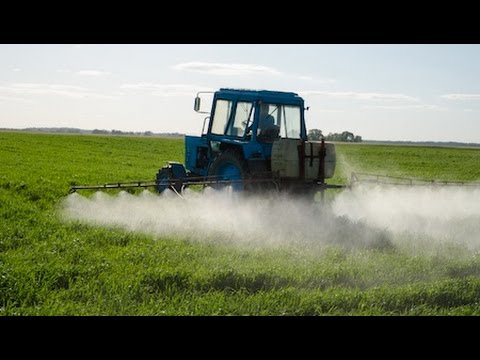 Last week German chemical giant Bayer announced it plans to purchase the agricultural seed and supplies company Monsanto for 66 billion dollars. If the deal goes through this will be one of the all-time largest mergers of the decade. At first glance the two companies operate in different markets and Bayer is mainly known for chemicals and pharmaceuticals and Monsanto is best known for its genetically modified seeds. Here’s what the CEOs of the two companies Werner Baumann and Hugh Grant had to say.

WERNER BAUMANN: For Bayer, this step will significantly strengthen the opposition as a leading life science company in the world. Both healthcare and agriculture of attractive growth perspectives. With our innovative products we hope to improve people’s quality of life.

PERIES: A combined Bayer-Monsanto company would become the largest agribusiness company in the world, controlling 29% of the world seeds and 24% of the world’s pesticides. The European Union must still approve the deal and food activist groups are mobilizing against this merger.

Joining us now to talk about this merger is Heidi Chow. Heidi works at Global Justice Now’s agribusiness campaign to challenge a corporate takeover of global food systems. Heidi thank you so much for joining us today.

HEIDI CHOW: Thanks for having me.

PERIES: Heidi, as we could see from the statements by the CEOs, they were brief comments. Nevertheless, they were promoting the merger as something that will benefit the consumers and farmers that now can purchase fertilizers, seeds, and pesticides all from the same company. What is your reaction to the deal?

CHOW: So I’m really concerned about this merger because what we’re seeing is, we’re seeing 2 big players in a seed and the agrochemicals market coming together to ultimately form a [meta]corporation which together would actually take home vast control of commercial seeds, agrochemicals, but ultimately over our food system. We’re really concerned that this is not going to be in the public interest. Nor in the interest of the environment. Not in the interest of small scale farmers across the world who are the main producers of food and feed about 70% of the world’s population.

PERIES: So what do you think the consequences will be on the farmers in actuality?

CHOW: So there are two kind of main concerns I suppose. So the first one is around the industry is increasingly consolidating. The big 6 in the agrochemical industry are now becoming the big 3 because there have been other mergers announcements during the course of this year. So that’s farmers who are dependent on commercial and agrochemicals would have a reduction in the number of suppliers of these items. But more concerning for us I think is that both Bayer and Monsanto are in the forefront of pushing a model of agriculture which increasingly takes control away from small scale food producers and into the hands of multinational corporations.

They push a model of agriculture where farmers who have been saving seeds for generations who’ve been cultivating their own seeds and been swapping them in their communities. Where they’ve been using agroecological methods to fertilize soil and get rid of pests. These farmers are being pushed into a different model where they are being forced to depend on these big corporations. Where these big corporations are able to set prices, terms and conditions, and ultimately their packages of seeds and chemicals need to purchase year upon year which is an additional cost and can jeopardize livelihoods.

PERIES: Well what do you say to organizations and research houses and laboratories that are working on the Monsanto seeds and trying to–they see themselves as addressing a possibility of drought and global hunger and so forth and they’re trying to come up with innovative ways in which they can feed the world.

CHOW: You’re right that there’s definitely a sense that these countries do portray themselves as doing ideas and pushing products for the benefit of addressing food security. But actually what small scale producers need who are the majority, who continue to feed the majority of the world’s population at the moment is actually support to develop their own seed diversity to keep and save seeds and swap seeds and also have more support and turn research into lots of agricultural methods to grow food. Which is better for the environment. It’s better for the livelihoods. It’s better for small scale food producers to keep control over that and an input. Rather than developing methods which ultimately are about showing up corporate profits rather than benefitting small scale producers and ensuring equitable distribution of food.

PERIES: Now both the EU and US regulators both have to approve this deal. What do you think will happen? What are the chances that they will proceed with allowing them to merge?

CHOW: It’s really difficult to say because already there’s a lot of concentration in that industry of a moment and there hasn’t been much regulatory and intervention to prevent the sizes of these companies growing bigger and bigger, more powerful and taking on more market share. I know that certainly from the UK and from our end we’ve just launched a petition to try and get the European regulator to stop and prevent this merger from happening and I’m sure across the US there are other groups who are also lobbying the US and their competitor’s regulator there to try and prevent it from happening on both sides of the Atlantic.

PERIES: What’s the track record of your success in these kinds of effort campaigns advocacy that’s been going on?

CHOW: So earlier this year, Monsanto’s flagship product is a product called Roundup which is a weed killer that’s used not only used in agriculture but also used in public spaces certainly here in the UK, in schools and public gardens. The chemical in that glyphosate was classified as probably causing cancer. In other words, health organization. So this year when the chemical glyphosate was coming up for its relicense in the European Union. Together with other European campaigners, we launched a massive campaign to try and prevent it’s relicense. We managed to prevent what was going to be a 15 year relicense for this chemical and managed to reduce it significantly to just a 12-18 month relicense, pending further investigation. So we really believe that when people come together and mobilize and try to speak up and say public interests should take precedence over corporate profits, we do see change happening and we’re really hoping that with this will happen again in terms of resisting this merger.

PERIES: Heidi, Monsanto is a household name. Protests from Brazil to Bangladesh has been launched against this company and you’ve actually written about this. Tell us what will happen in terms of the resistance that we have built over the years. What will happen to that in terms of this merger?

CHOW: I think Monsanto’s motivation around merging was more about surviving in an industry that was increasingly becoming more concentrated. But definitely a byproduct for them is the ability to get rid of their toxic brand and reputation in one fell swoop. But I know that certainly campaigners that have been working on this for a long time are certainly not going to go away. In next month in October there’s going to be a people’s tribunal to actually bring Monsanto’s corporate abuses in front of a legal process.

It’s not going to be, it’s going to be using real legal processes and legal professionals and real judges as well as real witnesses. But its conclusions won’t be binding because we don’t actually have any international law in place right now that can hold a corporation like Monsanto to account. Having said that I think that the world wide activism around Monsanto will probably continue because ultimately this isn’t Monsanto going away. It’s Monsanto getting bigger. I think that resistance to corporate power in the food system because ultimately it’s taking more and more control about food away from the people who produced it, away from the people who consume it. And it’s a very small handful number of very large players whose interests are not necessarily for the public interests. And Heidi, when will there be a decision made about the merger?

PERIES: And Heidi when will a decision be made about the merger?

CHOW: I’m not sure about that. But I read reports about potentially taking up into next year. But we’ll have to keep an eye on the regulators and see whether they’ll even take the decision to actually look into these cases and make decision on them.

PERIES: Alright Heidi I expect that you’ll be keeping an eye on this so we hope to have you back very soon. Thank you so much.

CHOW: Thank you so much.

Have a Little Carcinogenic Glyphosate With Your Morning Oatmeal