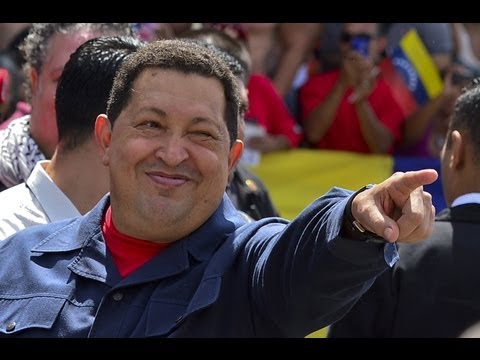 NICOLÃS MADURO, VENEZUELAN VICE PRESIDENT (SUBTITLED TRANSL.): We came here to the Military Hospital in Caracas to follow up on the health of our president, commander. And the moment we were paying company to his daughter, brothers, and family, we then got the hardest and most tragic information we can transmit to our people. Hugo ChÃ¡vez Frias died today, March 5, at 4:25pm .

The Venezuelan Defense Department secretary, Diego Molero Bellavia, also spoke and announced the special measures for the transitional period ahead.

DIEGO MOLERO BELLAVIA, VENEZUELAN MINISTER OF DEFENSE (SUBTITLED TRANSL.): Here with me are a few members of the Armed Forces who are now being deployed to guarantee the safety and sovereignty of all Venezuelan Citizens. We are united on the purpose of having our constitutional precepts defended and to observe the will of our leader Hugo ChÃ¡vez Frias.

LEÃ“N: ChÃ¡vez died at 16:25 local time, only two hours before NicolÃ¡s Maduro declared that the historical enemy, as he called it, inoculated the disease that ultimately killed former President Hugo ChÃ¡vez.

MADURO: We have absolutely no doubt, and the right moment in history will come, when a scientific commission can investigate (and prove) that this disease was used to attack Commander ChÃ¡vez. He publicly said as much, and we have no doubt that was the case. (We think) that the “historical enemies of our homeland” found the way to harm the health of our commander.

LEÃ“N: Millions of peoples are mourning Hugo ChÃ¡vez’s death in Caracas and even lower Latin America.

For The Real News, this is Oscar LeÃ³n.

Whose Freedom Do We Celebrate On The Fourth of July