23 Things They Don’t Tell You About Capitalism Pt.6

Ha-Joon Chang: Making the rich richer doesn't make the rest of us richer

Ha-Joon Chang: Making the rich richer doesn't make the rest of us richer 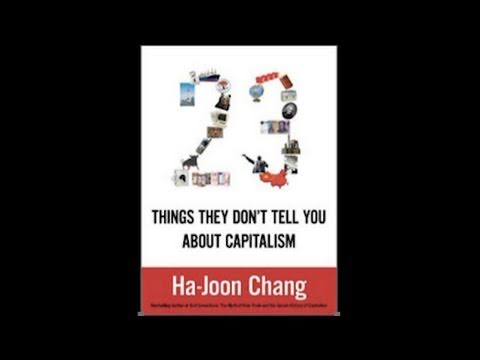 PAUL JAY, SENIOR EDITOR, TRNN: Welcome to The Real News Network. I’m Paul Jay. And we’re continuing our series on 23 Things They Don’t Tell You About Capitalism. And we’re joined again by Ha-Joon Chang, who teaches economics at Cambridge in England. Thanks again. Alright. Number 13: Making rich people richer doesn’t make the rest of us richer. So the trickle down [crosstalk]

HA-JOON CHANG, UNIV. OF CAMBRIDGE: Yes. You know, I mean, this idea, I mean, it sounds very obvious. You know, I mean, after all, it’s usually people with more money who have the surplus that they can invest to create wealth in jobs. So in the last 20, 30 years, especially in the United States, but also in Britain and some other countries, governments have engaged in massive amount of tax cuts for the rich, deregulated businesses, and all sorts of things to encourage (I mean, the theory went) these people to invest, because they now have more money. They can spare more money. They can invest it. And then that argument was this wealth will eventually, you know, trickle down throughout the society. So maybe in the beginning you are getting a smaller slice of pie because you are giving more to the rich guys, but eventually the absolute size of your slice will be bigger. So that was the theory. However, if you actually look at the record of the last 30 year, I mean, especially in the United States, it’s really kind of striking.

JAY: And what is it? Give us some examples.

JAY: Well, they were right about the trickling. They just didn’t get which direction it was going.

CHANG: Yes, it’s trickling opposite. Yeah. But as a result, did investment grow? No. Investment actually, as a proportion of national income, has fallen. Did the economy grow faster? No, actually. The economy has grown more slowly in the last 30 years, compared to the previous 20, 30 years, so that the Americans have given a huge amount of extra income to these people who are supposed to invest this, create wealth, make everyone richer. I mean, they have done it for nothing.

JAY: It’s really quite a profound point, though, isn’t it, that where does wealth come from, the–. We’re told jobs, wealth, production, all comes from capital, and capital’s the source of it, so you need to make sure some people have a lot of capital, and then they will go out and create wealth with it. But that’s actually quite a myth, isn’t it?

CHANG: Yeah. I mean, now, okay, capital plays a part, but, you know, I mean, the workers make a contribution. Also, the–.

JAY: Well, it doesn’t answer where does capital come from.

CHANG: Yeah. The national economy also provides collective capital, in the sense of, infrastructure and scientific research and so on. So it’s actually very difficult to divide up contribution of different elements in the way economies usually divide them up. But, I mean, even accepting their theory–I mean, let’s forget about all these fundamental philosophical questions. Even accepting their theory, I mean, it hasn’t worked out.

JAY: Well, even if you accept their theory, who says the capital has to be private capital? Who says it can’t be public capital that creates the jobs [crosstalk]

CHANG: Yeah. And, you know, in many countries it is public capital that does a lot of those things.

JAY: Including in this country. They just always find a way to privatize [crosstalk]

CHANG: That’s right, yeah. No, I mean, you know, one striking example is Singapore, where the government owns all the land. Eighty-five percent of housings are provided by government-owned housing corporation. State-owned enterprises, including Singapore Airlines that I talked about in an earlier segment, they collectively produce almost one quarter of national output. But it’s very thriving free market economy. So, actually, that–.

JAY: Well, what do you make of the success of this idea? Because the American political culture, I don’t know if you can say it’s dominated by it, but certainly maybe half the population believes this idea.

CHANG: Yeah. But, you know, the best way to prove something is to repeat it all the time. I mean, people, you know, from when they’re, like, three, four years old, hear only one story all the time. You know, what else do you think [crosstalk]

JAY: Yeah, rich create wealth, and all you could really want to do is try to be rich, except that isn’t going to happen for most people. Okay. Here we go. Number 14: US managers are overpriced, you say.

CHANG: Yes. You know, the US managers have hugely increased the kind of salary they get in the last, say, 30, 40 years. In the 1950s, ’60s, the average salary of a CEO was only about 30, 40 percent of an average worker. Today, this ratio is 300, 400 times. So in relative terms, compared to their counterparts one generation ago, the US manager is actually now getting ten times more salary. Now, when you are given this kind of figure, I mean, a lot of free market economy, come back and say, oh, no, but, you know, now you have to accept that some people have more talents, and now there’s a competition for talent, and that’s why we have to pay them a lot. But compare US manager’s salary with salaries of comparable managers in Switzerland, in Germany, in Japan, in Sweden, the US managers are getting at least twice more, sometimes five times more, for what these comparable managers [crosstalk]

JAY: So why are shareholders–meaning billionaires, pension funds, the people and forces that control these big corporations [crosstalk]

CHANG: Yeah, but, you know, don’t forget, I mean, these managers do everything to make their shareholders happy by increasing their share of dividends, using huge amount of their profit doing share buybacks, so that shareholders can get more capital gain, and in the process they have ruined the American economy. You know, I mean, they get paid twice, three times, five times more than Japanese or German managers. But are the American companies better than German companies, Japanese companies? No. So, actually, that’s, you know, a big con game, you know, I mean, that the managers say, well, we need to take care of the shareholders. The shareholders say, yeah, you are good boys; we are giving you, you know, a salary raise again. And it has become an absurd–it has reached an absurd proportion.

JAY: But still you have to wonder why, when you have general meetings of companies, I mean, why is there no stop to this. It’s–’cause it’s certainly continuing. There’s been no brakes on this at all. You would think that the people that own these companies would say enough’s enough.

CHANG: Yeah. [crosstalk] these companies, I mean, it’s basically these pension funds, private equity funds, and so on. I mean, these are [crosstalk]

JAY: But they get their representatives one way or the other on the boards of directors. They have compensation committees. They’ve all bought into this culture.

CHANG: Yeah, but compensation committees, they are filled with their friends. I mean, no, I mean, this huge insider kind of thing going on in the American corporate sector, I mean, the so-called independent directors, I mean, they are not independent, usually. I mean, even if they are independent, what do they know about managing this company? I mean, they usually get, like, university professors and so on who–.

JAY: To come in to say you have to pay the CEO a lot of money.

CHANG: Exactly. Yeah. I mean, they give you the legitimacy. But in terms of actually managing these companies, they don’t know and they don’t care.

CHANG: Yes. A lot of people believe that people in poor countries are poor because they are not entrepreneurial enough, you know, I mean, they sit around in cafe having seven cups of coffee in one afternoon, smoking their cigarettes. You know, I mean, that’s the typical image of developing country people [crosstalk]

JAY: Well, the other idea is that they’re uneducated, so they can only do very–things that aren’t so productive.

CHANG: But when you actually go to those countries, or when you live there, at least for a period, I mean, you realize that these countries are full of entrepreneurs. You know, there are people selling and buying things that–I mean, everything you can think of, and things you didn’t know you could buy. You know, for example, this practice–sorry, this profession has been abolished by the US embassy introducing this, the automatic answering machine system. But in the old days, if you wanted to get a visa interview at the American embassy, you actually had to line up. And that created these people who can only be described as professional queuers, professional liners. I mean, these people have no other job. They wake up at four o’clock in the morning, they line up before the American embassy, and come 8:30, some guy in suit is going to come and buy you–they’ll buy you a place with the money. I mean, there are people–.

JAY: So this is necessity is the mother of entrepreneurialship.

CHANG: Yeah, exactly. I mean, the point is that these people are engaged in all sorts of entrepreneurial activities, but they do not get congealed into something more productive, because it’s basically not supported by the society.

JAY: But that’s the real point. It’s such a waste of human potential. You see such imagination, such smarts, such entrepreneurial drive, with no construct to actually make it really productive for the society.

CHANG: That’s right, yeah. Some people have [incompr.] this idea and have tried to help them by providing small amount of credit. This is known as microcredit. Now, unfortunately, a lot of this microcredit is these days provided by glorified loan sharks, people charging 90, 100, 120 percent interest rate–can you believe it? But even the good guys do not really lift many people out of poverty, because they are on their own. They have a bit of money; that’s it. I mean, if you really want to help these people, you need to give them training. If you want to, say, help–.

JAY: And you have to have a global economy that allows these countries to actually grow in their own interests.

CHANG: That’s right. Yeah. Exactly. I mean, since the overall economy’s undynamic because of all this externally imposed free market, free trade policies, these people have fewer opportunities. They are really fighting for kind of the same market. You know. So, you know, I mean, they try to sell the same thing because they haven’t got many other skills.

JAY: Right. Okay. In the next segment of our interview, we’ll pick up on 23 Things, and we’re going to pick up on Number 16: We are not smart enough to leave things to the market. Please join us on The Real News Network.