Israel describes the Turkish trial as a kangaroo court, but Turkish lawyers pushing ahead and say an Interpol notice for the arrest of the former Israeli commanders will be issued if they fail to attend

Israel describes the Turkish trial as a kangaroo court, but Turkish lawyers pushing ahead and say an Interpol notice for the arrest of the former Israeli commanders will be issued if they fail to attend 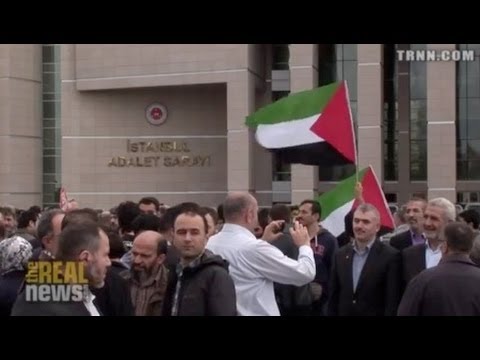 Istanbulâ€™s 7th High Court is a colossus of a building, which dominates the landscape around it. An appropriate setting then, for a trial which could have ramifications far beyond Turkeyâ€™s borders.

The Israeli militaryâ€™s attack on the Gaza aid flotilla in 2010 certainly damaged relations between Israel and Turkey. And the decision of the Turkish courts to push ahead with a trial prosecuting four former senior figures within the Israeli military, who were in command at the time, is likely to fracture those relations further.

Itâ€™s taken more than two years to reach this point, and the accused arenâ€™t even here to face their accusers. But the families of those killed onboard the freedom flotilla say they remain committed to seeking justice, and theyâ€™re pinning their hopes on this court in Istanbul.

â€œMy father was killed by a bullet that came from near, he was shot from here (the side of the head).â€

Forensic evidence indicates that 61 year old Ibrahim Bilgen was shot from a helicopter above, then shot twice from behind, and finally shot at close range in the side of the head with a beanbag round that entered his brain.

Today, his 24 year old son is seeking some measure of redress.

â€œI expect justice. When my father talked to me for the last time on the webcam, I said â€˜go to Gaza, do your job, come backâ€™. I wasnâ€™t expecting any soldier attack, because itâ€™s a totally civilian ship, from 37 countries.â€

Those killed also included a US national, 19 year old would-be medical student Furkan Dogan, who had been filming with a video camera that morning. His autopsy indicates that he was shot at close range while lying injured on the floor. His father has tried, without success, to seek help from the US ministry of justice.

â€œFurkan has always been someone who cares deeply about people suffering from poverty, famine or oppression. He was aware of what was going on in Gaza and it hurt him a lot. He wanted to show his heart is with the children of Gaza, and wanted to take gifts for them himself.â€

â€œFurkan knew he could face difficulties, but when you stand by the oppressed you cannot just flee when you see the powerful. But neither Furkan nor we were expecting such an aggressive and fatal attack on the ship. This attack was irrational.â€

â€œThere as not been much help from the US authorities. But the reaction from American people is very positive when I talk to them about him. They say they didnâ€™t know the attack happened in this way. The Mavi Marmara case has been covered up or twisted in the media there, there is disinformation being spread. Iâ€™m sure Americans would be standing by Furkan if they knew the facts.â€

In all, 9 people were killed on the morning of the 31st of May, 2010, in international waters. An earlier UN investigation described at least six of the deaths as summary executions. A tenth man remains in a coma to this day. Dozens more were injured in the shooting, with around 650 rounds of ammunition fired by soldiers onboard the Mavi Marmara, around half of them live bullets.

Israelâ€™s own investigation exonerated its soldiers, and stated that they acted lawfully in self-defence in the face of violent resistance, within the boundaries of international humanitarian law.

Retired US army colonel Ann Wright, who witnessed the entire attack from another boat alongside the Mavi Marmara, accepts that there was some resistance to the Israeli soldiers by those onboard.

â€œThe commandos coming in with violence, itâ€™s human nature if somebodyâ€™s coming at me and going to beat the hell out of me, Iâ€™m going to pick up that camera right there and try to stop them. Thatâ€™s what people were doing on the Mavi Marmara. They had no weapons, they used chairs, they bent some poles off things, but when youâ€™re facing a force thatâ€™s shooting and has already killed people, and you donâ€™t know whether theyâ€™re going to kill you next, one can understand why there were some people that tried to resist.

There were people who were killed on the top of the boat, on the Mavi Marmara, that were killed by snipers that were shooting from the helicopters. There was no resistance there. They were just standing there, and all of a sudden they were lying in their own pool of blood.â€

Passengers on other boats, where there was no resistance, say they too were shot with plastic rounds, tasered and severely beaten. Many of them have been testifying in Istanbul.

â€œThis is the first time the evidence has been brought to a court. And it also sends a signal to other Israeli government officials, that if you follow the dictates of a political administration, and you attack and murder others, you are going to be held accountable for this â€“ so this is a very important trial.â€

The witnesses range from Americans to Malaysians, Greeks to Algerians, Palestinians and Turks. In all, 37 nationalities were onboard the flotilla of six ships, and most are represented in this case.

Among them is Canadian Kevin Neish, who managed to smuggle out photographs from the boat. His testimony focused on the fate of 3 Israeli soldiers who were briefly detained by the passengers during the struggle for control of the ship.

â€œI had photographs of the Israeli commandos as they were brought into the ship, and actual evidence of them being treated properly. I had photographs of IHH doctors treating them and taking care of them, as opposed to the usual line of them being attacked and being lynched by the folks on the ship. As they were treating the soldier, he had a cut or a contusion on his forehead, thereâ€™s actually footage of him being treated, so while theyâ€™re doing that â€“ there was two aid workers full of holes one deck above full of holes bleeding all over the floor.â€

I too was onboard the Mavi Marmara, reporting as a journalist, and was asked to testify before the court regarding the seizure, by force, of video evidence of what took place, along with the attempted jamming of communications by the Israeli Navy to prevent media broadcasts, and the killing of Turkish journalist Cevdet Kilicilar, shot in the forehead at close range while taking photographs.

The vast majority of media materials and video evidence snatched from passengers by the soldiers, remain with Israel, which refuses to hand them back.

Israel has described the case as a showtrial and a kangaroo court, a unilateral political act with no judicial credibility. And perhaps predictably, the four Israeli generals have refused to attend or mount a defence, and are being tried in absentia, with defence lawyers appointed to them. But Israel itself is no stranger to cases of universal jurisdiction, and trying defendants in absentia, as it did with Nazi leaders in the wake of World War 2.

Lawyers acting on behalf of IHH, the Turkish aid NGO at the centre of the flotilla, claim the organisation has faced intense pressure to back down.

â€œIsrael has been trying to prevent the case reaching this point. There have been attempts to blackmail senior members of the IHH, and there has been pressure on passengers of the other ships to give up the trial. Israel told us that if we give up the trial they will provide a fund of six million dollars in Turkey. But we refused this, it is immoral. Israel has refused to apologise, and refused to lift the siege on Gaza.â€

â€œWe absolutely want a trial carrying a just judgement. The defendants can come and defend themselves; we want them to exercise their full rights. They can use Turkish lawyers or they can bring their own lawyers.â€

Critics within Turkey say that even if the trial finds the men guilty and issues multiple life sentences, the former military commanders are highly unlikely to face prison, as they wont be handed over by Israel. They argue that the case is a pointless symbolic exercise.

â€œIf the Israeli commanders ignore the court summons during the trial, the judge will issue a warrant for their arrest. They will then ask Interpol to bring them here. Turkey and Israel signed a treaty on extradition, and if Israel refuses to hand over the defendants for political reasons then there will be serious political consequences. Turkey also has extradition agreements with other countries and if they visit those countries, it can demand they be arrested and extradited. If the trial concludes and they are found guilty, then this will take things to an even higher level.â€

This is a massive case, with almost 500 complainants, and itâ€™s likely to run over a period of years. Its implications could also be huge, depending on the reaction of both the Israeli and Turkish governments. But either way, the families of the victims seem satisfied, for the moment, that their story is finally being heard in a court of law. Hassan Ghani, for the Real News, Istanbul.