Colombia’s US Embassy To Evict GM Protestors From 2-Year Encampment, After Worker Ties Himself to Cross

Frank Hammer: GM worker ties himself to a cross to get embassy's attention over GM's unsafe factories, refusal to pay disability claims, and the firing of injured workers.

Frank Hammer: GM worker ties himself to a cross to get embassy's attention over GM's unsafe factories, refusal to pay disability claims, and the firing of injured workers. 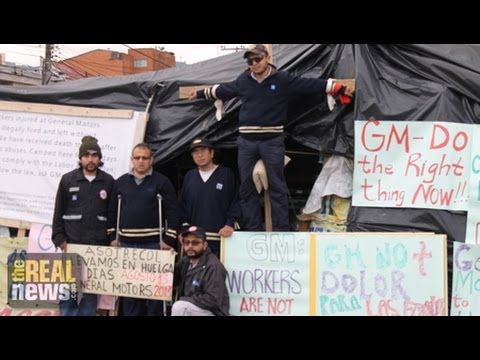 On Tuesday, August 13, Carlos Trujillo of the association of injured and ex-workers of General Motors Colombia, or ASOTRECOL, bound himself to a cross in front of the U.S. Embassy in Bogotá to protest GM’s refusal to mediate towards a just resolution for their grievances, which include operating unsafe factories, refusing to pay for disability claims, and firing injured workers.

Joining us now to discuss all this is Frank Hammer. Frank Hammer just returned from a trip to Colombia. He is a retired GM employee of 32 years and is the former president of the United Auto Workers local of 909. And he currently is a labor organizer at School of the Americas Watch.

Thanks for joining us, Frank.

DESVARIEUX: So, Frank, can you just tell us exactly why Carlos decided to tie himself up to a cross in front of the U.S. Embassy? And just give us a bit of background of what has been happening there in Colombia for the past two years.

HAMMER: We had a U.S. delegation that went down this past week who helped the workers who are camped out in front of the U.S. Embassy in Bogotá, Colombia, commemorate the second anniversary of that encampment. They have been occupying, basically, a sidewalk across the street from the U.S. Embassy in an effort to get the U.S. government, under the Obama administration, to basically influence General Motors, of which the U.S. government is a part owner, to meet the just demands of the workers who were injured in an antiquated plant facility and who, after they were injured, had their medical records tampered with by GM and then were illegally fired.

So these workers have been on the street. They cannot provide for their families. They have not had any medical care for the severe injuries that they sustained both to their spines, to their soldiers, to their arms, to their legs. They are all, as we witnessed ourselves, on crutches and walking around on canes, can’t get other work, and need General Motors to come to the table to resolve the injustices that were committed against the workers.

DESVARIEUX: Has the U.S. government actually responded to ASOTRECOL’s grievances?

HAMMER: Well, the U.S. government a year ago, I think, was–helped to facilitate a mediation that took place in August 2012. The mediation was cut short because the mediators–the mediation provided by the Federal Mediation and Conciliation Service had to return to the United States. It left the parties in an impasse. General Motors blamed the workers for walking away from the mediation table, which is categorically untrue.

And since then, we have been–in fact, one of the reasons we went down was to meet with the U.S. Embassy and urging them to reinitiate, or better yet to complete the mediation that was started a year ago, so that some just resolution can be reached and that both parties could accept. So the U.S. Embassy has been slow to call on General Motors to get back to the table. And we think this is most unfortunate, because GM is actually reflecting on U.S. taxpayers, who are part owners of the company.

DESVARIEUX: Okay. Have you actually visited any of these plants? Could you paint a picture for our viewers as to what you would find there? What sort of parts, first of all, is GM producing there? And how many people are they employing? Just give us a sense of what we would find if we were to be there in Colombia and see on the ground.

HAMMER: I think it’s very important for viewers to know that that particular plant in Colombia is not one of those plants that GM exported overseas. This is a plant that actually is rooted in Colombia, produces for a local market, doesn’t sell their vehicles back here. It’s an assembly plant to produces the Chevy Spark. For viewers who see a Chevy Spark in the streets of the U.S., those are the ones that come from South Korea.

And the best way to tell you about the plant is what came out of reports from a UAW delegation, a delegation of my union that went down to the plant to inspect it a year ago at the time of the mediation. And the UAW representatives told the U.S. Embassy none of our members would work here. It was–it’s an antiquated plant. It had old, very heavy, cumbersome welding guns. And these are the things that workers day in and day out had to wield and rotate and get into precarious corners in order to do the proper welding job on the car assembly. We also had workers that had to transport, carry transmissions on their backs for the purposes of assembly. It was pretty primitive.

And the real telling story is that GM, since the protest by the members of ASOTRECOL, have made vast new improvements in the factory, as if to conceal the murder weapon or the maiming weapon. Today, there are more–have made ergonomics improvements. They have replaced the welding guns with robots and so on. So if you went down there today, you would see the consequences of the workers’ protest. And that means that the workers who are currently working in the plant are not suffering the injuries that came down on the workers at the encampment.

DESVARIEUX: What is ASOTRECOL hoping to achieve with this latest action?

HAMMER: Well, you know, GM is basically trying to wash its hands of this episode. And the workers are unable to go forward with their lives. And, in fact, on the contrary, they’re facing evictions and foreclosures very similar to what we’re experiencing here in Detroit and elsewhere in the U.S.

And what they’re hoping that GM will do is return back to the mediation table, the one that was initiated a year ago, and complete the mediation and arrive at a conclusion that would allow the workers to continue with their lives and end this very, very sorry chapter in GM’s labor relations, so to speak, as it manifested itself in Colombia.

DESVARIEUX: And just really quickly, Frank, for our viewers that might want to get involved or be interested in helping the ASOTRECOL movement, where can they find information about that?

HAMMER: Well, let me just say the support of people here in the U.S., and especially autoworkers in the Detroit area and elsewhere, has been profound. There have been gate collections. There have been monies raised at local union meetings, retirees meetings. We raised, I think, well over $10,000.

There are two webpages on the website YouCaring.com which make it very easy for people to support this cause, to sustain these workers in their struggle. And I hope that [incompr.] will include the links on the transcript that will appear with this report.

DESVARIEUX: Okay. Thanks so much for joining us, Frank.

HAMMER: Jessica, thank you very much.