As aid starts to trickle in, and the extent of the horror becomes known, decisions are already being made that will affect the Haiti that emerges from this. Ansel Herz reports live from Port-Au-Prince on the role that the deployed US troops are playing, while author Peter Hallward weighs in on the role that the US has played in Haiti's recent history and shares his concerns that post-earthquake Haiti will further cement the domination of the Haitian people by foreigners.

As aid starts to trickle in, and the extent of the horror becomes known, decisions are already being made that will affect the Haiti that emerges from this. Ansel Herz reports live from Port-Au-Prince on the role that the deployed US troops are playing, while author Peter Hallward weighs in on the role that the US has played in Haiti's recent history and shares his concerns that post-earthquake Haiti will further cement the domination of the Haitian people by foreigners. 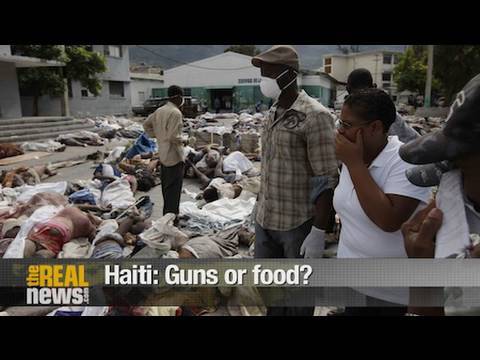 JESSE FREESTON, PRODUCER, TRNN: As information about the aftermath of the horrific earthquake in Haiti continues to pour in, The Real News spoke to independent journalist Ansel Herz, who joined us via broadband from the United Nations base in the Haitian capital of Port-au-Prince.

ANSEL HERZ, INDEPENDENT JOURNALIST: Basically I was at one of the hospitals that was not crushed. There are basically just a few Haitian doctors there, Haitian Red Cross, and then a team of French doctors, probably, I think, about a total of seven of them. And they’re poorly equipped; they don’t have all the supplies that they need. We felt another tremor today and everybody ran out of the building. They’re basically treating, like, one or two people at a time. And so, in the meantime, there are just hundreds of people outside this hospital in tents, waiting for some kind of care, and many of them have been there for days. Yeah, the other needs are, I think, for food and water, obviously. I just actually got on the Internet now today and saw one of the top reports in the British media basically hyping, I think, the notion that Haitians are looting in a widespread way. There’s a picture of two Haitian guys bringing boxes out of a building which is almost entirely collapsed. I haven’t seen any, quote-unquote, "looting" myself. What I have seen is people trying to share what they have.

FREESTON: The focus on looting found in much of the English-language media coverage has brought some to question whether or not Haiti will become another example of what author Naomi Klein famously termed the "shock doctrine". Under the model, harsh security measures are imposed, followed by the passage of policies that under normal situations would cause massive resistance, such as the privatization of public services, but which pass easier under the combination of crisis trauma and militarization. Often this is accomplished through crisis-time loans that come with harsh conditions, limiting public expenditure and opening markets for foreign investment. The dire straits of the crisis situation leave the embattled government with no room to negotiate. The international monetary fund has already pledged $100 million in such conditioned loans to Haiti. Klein points out on her website that the Heritage Foundation think tank responded within hours of the earthquake with the demand that the US should use the crisis to its advantage. They quickly took the post down, but a new one appeared soon after, laying out four demands for the US intervention in Haiti: number one, send the military; number two, appoint former President George W. Bush to join Bill Clinton in leading the US relief effort; number three, make it a central task of the military to ensure that Haitians aren’t getting on boats to illegally enter the United States; and number four, tie the US’s humanitarian aid to Haiti to Democratic and economic reforms. As of Monday morning, President Obama has deployed a total of 5,000 US military personnel. On Saturday, he completed part two in appointing former Presidents Clinton and Bush to head up fund-raising efforts.

BILL CLINTON, UN ENVOY TO HAITI AND FMR. US PRESIDENT: We want to be a place where people can know their money will be well spent, where we will ensure the ongoing integrity of the process. And we want to stay with this over the long run.

FREESTON: Peter Hallward, author of the book Damming the Flood: Haiti, Aristide, and the Politics of Containment, say that while ex-presidents are great for raising money, neither Clinton nor Bush have ever shown respect for Haitian sovereignty or their twice-elected, twice-overthrown leader, Jean-Bertrand Aristide.

PETER HALLWARD, AUTHOR: Well, it’s a very discouraging development, and it demonstrates a kind of fundamental continuity of American strategic interests. You know, to start with Clinton, very briefly Aristide’s forced out of office by a military coup in September ’91 when Bush Senior is in power. Clinton maintains the standard US policy, which was not to return Aristide to power until, through negotiations with the coup leaders, with the Army, they had managed to extract a whole series of concessions, which basically involved him accepting the neoliberal policies that he’d opposed when he was elected. And the pressure they put on him was very simple, which was to kill his supporters in Haiti. The United States was involved in the setting up of death squads and other forms of paramilitary coercion that killed, you know, hundreds and then ultimately thousands of people in Haiti, all from ’91 to ’94. And only when it was clear that basically Aristide had no choice—you know, the option was either to allow this to continue indefinitely or to make a certain number of concessions—he reluctantly made those concessions. And then Clinton could revel in the restoration of democracy and, you know, cover himself with a kind of moral rectitude of, you know, a kind of good Samaritan. But it was, I think, profoundly hypocritical to do that.

GEORGE W. BUSH, FMR. US PRESIDENT: —people of Haiti. There’s just an unbelievable spirit amongst the Haitian people. And while that earthquake destroyed a lot, it didn’t destroy their spirit. So the people of Haiti will recover and rebuild, and as they do, they know they’ll have a friend in the United States of America. Mr. President, thank you for giving me the chance to serve.

BARACK OBAMA, US PRESIDENT: Thank you. I appreciate it.

HALLWARD: Bush was even worse. So Aristide’s reelected in with a huge majority in 2000. Even before he’s taken office, you know, the United States cuts off all bilateral aid to Haiti, which is to say, you know, a very substantial amount of money, an amount roughly equivalent to about half the Haitian annual budget. More importantly, and more perversely, they immediately suspend the disbursement of pre-agreed loans that had been agreed with the Inter-American Development Bank before Aristide came back in ’97-’98, pre-agreed loans for $140-plus million and the promise of $400-500 million to come. All of that money was frozen, and Aristide never saw any of it. So the effect was really a campaign of economic aggression against the government: it cut its budget in half and prevented it from being able to invest in any of the programs that it had promised and campaigned on when it was elected in 2000. A component of the US strategy under Bush was to launch a paramilitary force to sabotage the government directly, to attack police stations, to attack, later, government officials and government sympathizers. And these operations started in July 2001, just a few months after Aristide’s government starts, and they continue right through to the insurgency. They grow eventually into a full-on insurgency in February 2004 and lead to what is a straightforward military coup. So that is Bush’s legacy. It’s a legacy of direct aggression against an elected government that led to a very brutal and violent coup. So having Bush and Clinton as the people who will push through this next round, you know, of heavily managed interference in their country makes me worry. Yes, there’s a need for emergency relief. That’s undeniable. But on what terms and under what conditions and in whose interests? You know, I think there’s a lot of reason to be very worried about that.

OBAMA: Thousands of American personnel, civilian and military, are on the scene working to distribute clean drinking water and food and medicine, and thousands of tons of emergency food supplies are arriving every day.

HERZ: I saw a sign today outside of a crushed building that said US Marines welcome dead bodies inside. I think people maybe are hoping that some kind of Marines will come here.

FREESTON: But according to Herz, the first US soldiers to arrive in Haiti have not been taking on these tasks.

HERZ: I’ve seen—I don’t know if they were Marines. I believe they were Army soldiers. And I saw many, many of them at the airport. I’ve also seen many Navy helicopters flying overhead. I haven’t seen any of them in the streets doing any kind of relief of any kind. I think that right now they’re providing security for the airport, where there are many foreign journalists and many foreigners in general.

FREESTON: The commander for the US military mission in Haiti, Lt. Gen. Ken Keen, confirmed on Pentagon TV on Saturday that providing security was a role the military would be playing alongside their humanitarian mission.

LT. GEN. KEN KEEN, COMMANDER OF US MILITARY MISSION IN HAITI: Right now, as we’re pushing forward [inaudible] supplies as fast as we can get them, and getting, principally, right now, water and rations. Security is a key component of humanitarian assistance operation as we go forward and do that.

HERZ: In some of these places, like Champs de Mars, where there’s a huge public square right across from the collapsed National Palace—we were there last night, myself and a Haitian journalist, and people are living side-by-side in makeshift tents that they’ve set up, basically living hand-to-mouth. We asked people, "Have you received aid here?" And it seemed like it would be a great place for somebody to come and just distribute food packages to thousands of people. And they said no, that they hadn’t received any food aid in the area.

FREESTON: By Sunday night there were still few reports that aid had reached the tent cities of Port-au-Prince. The days ahead will show to what extent players like the US military, the UN, and ex-presidents Clinton and Bush will allow Haitians to determine how and for whom their country is rebuilt. For now, Herz suggests donating to organizations like Partners in Health.

HERZ: Partners in Health is a widely respected organization that has many Haitians leading its operations to provide health care to Haitians.

Ansel Herz is an independent journalist and web designer originally from the United States but currently based in Port-Au-Prince, Haiti. His personal website can be found at www.mediahacker.org. Peter Hallward is a Professor of Modern European Philosophy at Middlesex University in England. In 2007 he published the acclaimed historical account of post-1990 Haitian politics, Damming…