Haiti: Weeks of Protests Demanding the Resignation of the President 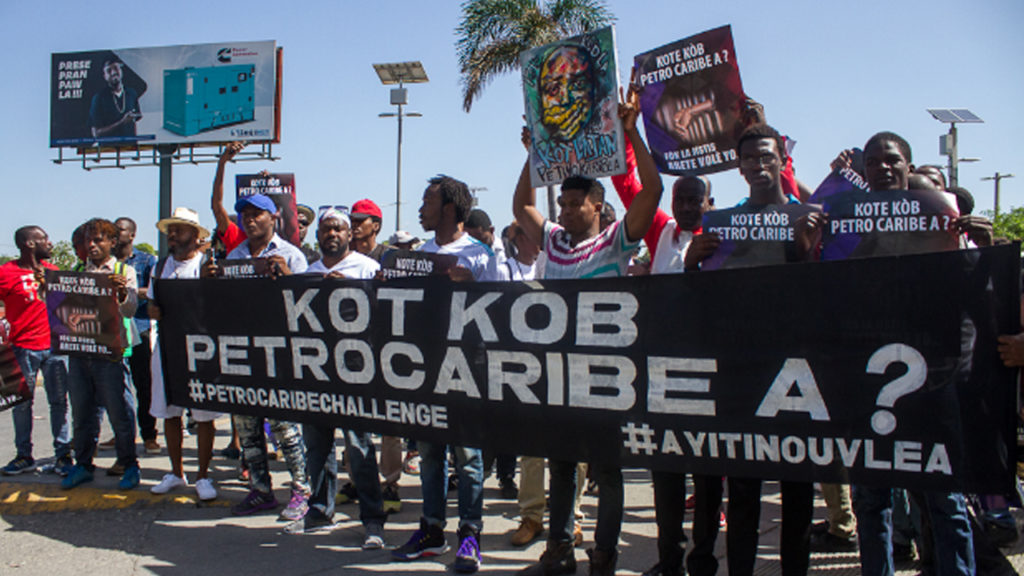 Daily protests continue in Haiti for more than a week, now. On Wednesday another protester was killed, bringing the death toll to seven so far. Also, a journalist was wounded on Wednesday. The protesters are demanding the resignation of president Jovenel Moise.

Now joining me to discuss all of this is Jacqueline Charles, an award-winning reporter for the Miami Herald, and was a Pulitzer Prize finalist for her coverage of the 2010 Haiti earthquake. Jacqueline, good to have you with us.

JACQUELINE CHARLES: Thanks for having me.

SHARMINI PERIES: All right, Jacqueline, let’s start off with what these protests are about. It’s related to a corruption scandal, but tell me about it and why they want the resignation of the president.

JACQUELINE CHARLES: Well, in the last couple of months what we’ve seen is building protests in Haiti. If you remember, in July the country was shut down for several days after the government announced a fuel hike. And as a result, Haitians took to the streets. Barricades went up in the street. The country was shut down for three days. We saw the cancellation of international flights. And eventually the prime minister resigned, on the edge of being fired by the Parliament.

We fast forward to the month of October, and we saw large protests as a result of corruption. Haiti, like a lot of other countries in Central America and the Caribbean, used to receive discounted oil from Venezuela, and with the savings from that oil, purchased for that oil was a hundred dollars and up a barrel, they were supposed to invest it into social programs. So increasingly Haitians have been asking where is the money? Where is the Petrocaribe money? Petrocaribe is the name of that program.

Then in November, the protest over corruptions, the narrative changed, and it became a referendum on President Jovenel Moise, who just celebrated two years in office on February 7. What has been happening along this line is that the local domestic currency has been in a freefall against the U.S. dollar. The economy is not improving. And whereas before Haitians were just jobless, today even if they have money in their hands they can’t really afford anything. We fast forward to November, more protests; December, there is a fuel crisis. People are driving around for weeks. They cannot find any fuel in the country, while there are two tankers off the coast of Port au Prince filled with fuel; diesel, gasoline. But the government owes 70 million U.S. dollars and has been unable to pay the bill. Eventually they do so, and on February 7, the 33rd anniversary since the fall of Jean-Claude “Baby Doc” Duvalier and the end of the Duvalier dynasty, and Haiti ushered in democracy. Haitians took to the streets in very large numbers. Not just protesting against corruption, government ineptness, the economic crisis, but then they are also calling for the resignation of President Moise.

And we are now on day nine consecutively with protests, and the country has been shut down, meaning no schools, no work. People have literally been holed up in their homes, uncertain of what’s waiting for them around the corner, whether it’s looters, whether it’s tear gas, whether it’s fiery barricades.

SHARMINI PERIES: Jacqueline, the Haitian people has a very specific and particular connection to Venezuelans. And given the history there with Simon Bolivar, and also the way in which President Chavez was really received by Haitians, and also the program Petrocaribe was set up by President Chavez to provide some relief to the people of Haiti. One of the poorest nations in the world. How does all of this now get tangled up in a corruption scandal through Petrocaribe?

JACQUELINE CHARLES: What’s happening with Petrocaribe is that it’s a discounted oil program that Haiti, as well as other Latin American and Caribbean countries, were a part of. When you take, for example, oil at $100 a barrel, Haiti did not purchase oil from Venezuela for $100 a barrel. It received it at a discounted price. Well, they didn’t have to pay that back until 25 years, and at a rate of one percent. And so the savings that they were getting from that discounted purchase was supposed to be invested in social programs, housing, things to alleviate the lives of the poor.

Today when you look in Haiti, almost 10 years after the earthquake, Haitians are looking around and they’re saying, where did the money go? There are half-constructed offices, ministries that were destroyed during the earthquake that have not been rebuilt. There are planned buildings, for instance like the new Parliament that does not exist, but yet the previous government signed contracts in order for that construction to take place. There were actually construction projects that were done, but the construction work was very shoddy. So today Haiti owes Venezuela about $2 billion from this debt. And Haitians are saying we have to pay this debt service, which means that there’s less money for social programs, there’s less money for education, there’s less money to alleviate our lives. And yet we don’t see where the money has gone.

And so recently the country’s auditors, government auditors, issued the first of two reports, but it’s still preliminary, where it basically did a forensic on some of these contracts that were signed by the government, and basically said, OK, in this case this contract was signed, but the project was not delivered; or in this case the bidding process was problematic. The current president is among a long list of individuals or companies who have been cited in that report in terms of having received money for the Petrocaribe fund. And the question is where did it go, what did they do?

But I have to tell you, it’s–you know, while the Petrocaribe has been building, you know, and you saw movement on social media, especially a lot of young Haitians who have been asking this, what you have is a combination of things. Petrocaribe just didn’t happen yesterday. It just didn’t happen under this current administration. Haitians are frustrated. They’re looking at the situation of their lives. They’re not seeing improvement. And this devaluation of the domestic currency is not helping the situation by any means, because even Haitians who have money in their hands are finding it difficult to afford basic staples like flour, bread, rice. I mean, this takes us back to 2008, if you remember, that there were global food riots, and Haiti had its own share of riots as a result of the mounting price of rice.

So you’ve got concerns about corruption. You’ve got a government that really hasn’t been responsive in terms of saying here is our program for improving the situation. And on top of that you’ve got the skyrocketing prices and inflation, which is at 15 percent. So Haitians are finding that it’s very unmanageable, and some are taking to the streets.

SHARMINI PERIES: Now, earlier you were calling on the attention of the international community on Haiti. Now, one could argue that Haiti was the pet project of the international community. The United States, in particular. I mean, when you think about the Clinton Foundation and the resources that it has gathered to provide Haiti relief, particularly after the earthquake, which you’re very familiar with. So what has happened over these years in terms of aid and support that Haiti has been receiving? And where is that money going, and where is the aid of the United States and this relief that the Haitians are looking for?

JACQUELINE CHARLES: You look around the country today, you don’t see the presence of the international community.

The United States–you’re right. For the United States, it was the biggest benefactor in terms of aid for Haiti. It was about $400 million a year. I don’t know what that number is today, but we don’t see the attention from the U.S., or certainly from the Trump administration, that you’ve seen from past administrations.

So all of that is is where we are today. You have less access to U.S. dollars. You have a United Nations peacekeeping mission that was in the country. They have since left. There’s a smaller mission. They are downsizing as of October. The plan is to be out of there. You don’t have a circulation of U.S. dollars. So all you have is a diaspora that is sending approximately $2 billion a year to a country with 12 million people, but with so many social needs. And you don’t have jobs. You don’t have the investment. So all the expectations that happened after the earthquake, they have not come to fruition. And today I believe that you are seeing the result of many of that, as well as the leadership and some decisions that have been made by the previous administration and this current administration.

SHARMINI PERIES: All right. For someone who’s been covering Haiti for so long, what are some of the reliefs that could be delivered to the Haitian people immediately, in your opinion?

JACQUELINE CHARLES: You know what, I don’t have an opinion on it. I think the Haitian people–I think that we may be at a stage today where Haitians are being left to to figure it out for themselves. There are a lot of strong feelings on their part, you know, in reference to the international community and in reference to the aid community. You know, one of the things that I–what I’ve been told over and over about Haitians is that whatever it comes, whatever is delivered, it has to be sustainable. Because what often has happened over the years is that they will receive some sort of assistance. But when the funding runs out you go back to ground zero, and they themselves cannot sustain it. And really what this country needs today is sustainable development. However that looks, how it should be looked like, I leave that to the experts, because I’m not a development expert. I just cover the news.

But today, you know, marching–we don’t know, you know, what tomorrow’s going to bring. We don’t know how long these protests are going to last. We don’t know if this president, who is in the second year of a five-year mandate, will he be able to hold on. And even if he does, will he be able to govern? The only thing you know is today you have a country that is in crisis. It’s not just political, but it’s an economic crisis. And it has to find its way out of it. And the leaders on both sides have to figure out a way and how to get over this current challenge they have.

SHARMINI PERIES: All right. Jacqueline, I thank you so much for joining us today. I’ve been speaking with Jacqueline Charles, an award-winning reporter for the Miami Herald, and she was a Pulitzer Prize finalist for her coverage of the 2010 Haiti earthquake. Jacqueline, good to have you with us.

JACQUELINE CHARLES: Thanks for having me.