Bahrain Monarchy From British Empire to US Fifth Fleet 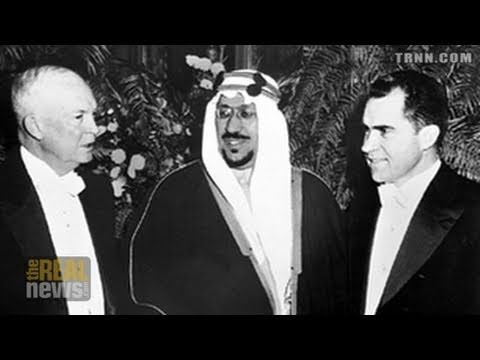 PAUL JAY: Welcome to The Real News Network. I’m Paul Jay in Washington. In Bahrain, Saudi troops continue to help the Bahrainian king and government suppress peaceful protesters. Now joining us to talk about how the king came to power in Bahrain is Husain Abdulla. He’s the director of Americans for Democracy and Human Rights in Bahrain. Thanks for joining us again.

JAY: I should remind people who didn’t see our other interview, you’re a small business man in Alabama, and you represent this organization, which has members across the United States. So talk a little bit about the history of the Khalifa family, how they came to power, and what keeps them there.

ABDULLA: Al Khalifa came to Bahrain in 1790. So they’ve been ruling–or close to that period. They’ve been ruling Bahrain for over 220 years. Since they came to Bahrain, they had this hereditary dictatorship, which mean the father gives the rule to his son. And major government post, actually over 80 percent, held–or 70 percent, held by Al Khalifa ruling family. And it’s basically an autocratic, authoritarian rule, where there is no free or fair elections. Human rights are violated. Torture is a policy against political prisoners. Prisons are full of political prisoners. And there is no real freedom of press or expression. And the government brought mercenaries in their security forces so they can attack the majority of the people.

JAY: Let’s go back a little bit. They more or less become the British protectorate, if I understand it correctly, in the late 1890s, and for most of the 20th century are really under British control. They’re certainly in alliance with Britain. When does that transfer, where the Americans become more dominant? Then when does the Fifth Fleet show up?

ABDULLA: Bahrain became an independent country in 1970, ’71. The relationship between the United States and Bahrain started in mid ’50s. And then Bahrain was chosen to be the base for the Fifth Fleet. Bahrain and the government of Bahrain, the Al Khalifa ruling family, enjoyed a very strong, robust relationship with different US administration.

GEORGE W. BUSH: Tonight I’ll have a statement, manage to have a statement, and then we’ll ask you all to leave. We’ve got some business to do. First, Your Majesty, welcome to the Oval Office. It is such an honor to have you here. America has got a great friend in the Kingdom of Bahrain. It’s a place where we’ve had longstanding relations. It’s a place where we’ve had mil-to-mil relations for I think nearly 50 years. And you have been a stalwart when it comes to peace.

ABDULLA: Yes. Bahrain was the first country in the GCC, in the Gulf Cooperation Council, where oil was found.

NEWSREEL: Escorted to an American cruiser lying near the entrance to the Suez Canal, one of the most colorful visits to the presidential cruiser was that of the ruler of Saudi Arabia, King Ibn Saud. The 65-year-old monarch leaves his country for the first time to attend this meeting. From Washington to Suez it’s a long way, but understanding each other’s problems brings East and West together for a better world.

JAY: –where there’s a deal made, more or less, if I understand it correctly, that the United States will protect the Saudi monarchy, this sort of an alliance between the Saudi monarchy and the Wahhabs. Was Bahrain part of this strategy?

JAY: But the strategy of essentially supporting these monarchies and dictators in exchange for secure oil and military alliances, it’s one of the pillars of US strategy in the Middle East. So in that sense it’s part of the same plan, no?

ABDULLA: Yes, it is the same idea, but it was not in that deal that you mentioned earlier.

JAY: Right. So where do you think things go from here? What is the demand of the Bahrainian people? Do they want an end to the monarchy?

ABDULLA: Well, on February 14, the people of Bahrain came on the street demanding constitutional change, demanding free and fair elections, end of gerrymandering based on sectarian background, demanding the resignation of the prime minister, who’s been ruling the country for 42 years. However, when they were faced with brutal force, so many lost their life, the demands elevated to removal of the ruling regime from Bahrain. So right now, despite the invasion, despite the killing, despite the massacres that took place, the resiliency in the people of Bahrain is still there. They’re defiant. They are still protesting. They are still calling for their rights to be respected and to be given and for the ruling regime to leave Bahrain, because they don’t consider them part of Bahrain.

JAY: Now, in Libya, when the peaceful protests were attacked, people picked up guns. There were desertions from the army. And it fairly quickly became an armed struggle, as far as we understand it, because a peaceful protest wasn’t possible. If peaceful protest isn’t possible in Bahrain, do you think this is also going to turn into a more violent struggle?

ABDULLA: I don’t believe so. The reason for that, the military in Bahrain are full of mercenaries. There are–the minority of the people who work in the military are Bahrainis; the overwhelming majority of them are brought up from neighboring countries like Yemen, Jordan, Syria, Pakistan, and basically they were brought to brutalize the people of Bahrain. So you’re not going to see defections there, in the army. However, in addition, guns are not allowed in the country. So normal citizens, normal Bahrainis, Bahraini citizen, don’t have access to gun. So the people of Bahrain only have this right, these peaceful protesters, and trying to appeal to the international community to apply pressure and stop the atrocities and the killing in the country. But to turn into an armed conflict between the protesters and the government, it is just not possible in Bahrain.

JAY: Thanks for joining us, Husain.