Thousands in Honduras Decry “Fraudulent” Election and Call for Recount 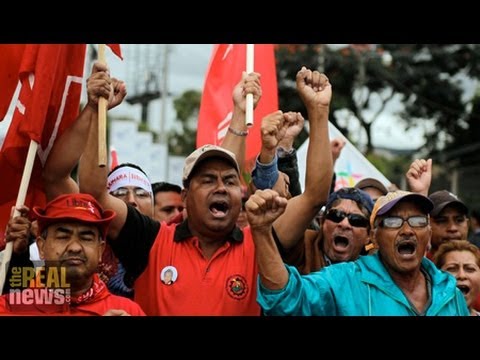 Thousands have taken to the streets in Honduras protesting alleged electoral fraud in the country’s presidential election. Candidate Xiomara Castro, who came in second place, has rejected the official election results. Castro is the wife of former leader Manuel Zelaya, who was ousted in a U.S.-backed military coup in 2009. Juan Hernández of the ruling National Party has been declared the winner in an election endorsed by international observers and the U.S. State Department.

Now joining us to discuss the election in the latest that’s happening on the ground in Honduras Is Gerardo Torres Zelaya. He’s an independent journalist and leading member of the National Front of Popular Resistance in Honduras.

GERARDO TORRES ZELAYA, HONDURAN JOURNALIST AND ACTIVIST: Hi. Hi, Real News. It is a pleasure to be here.

NOOR: So just give us an update. We’ve been closely following the developments in Honduras both before and after the election. About a week ago the results came out, and there were some allegations of fraud. Can you give us an update? You know, we know there’s been thousands of people in the streets. What is the opposition calling for today?

TORRES: Well, the elections happened last Sunday, November 24. And since that night, we saw that there were things that were going correctly. Many of the information that was sent for the Electoral Tribunalwas sent the same as we were registering from the places where people have–going to vote.

The way that the elections took place in Honduras was that people went, vote, and then they filled out a sheet of paper in which you say how many votes does each candidate have. Then you have to put it in a scanner. And that scanner received the information by the Electoral Tribunal. And then they got to tell what were the results.

But then was that the image of the scanner wasn’t the same as the image that people had in the voting places. And then we start seeing that all the changes were against the Castro and were in favor of Juan Hernández. We received all the papers this last week, and we started to compare it with the things that we received in the night of the elections and the next two days after November 24. And we saw that only in resting or adding votes, Xiomara was arrested more than 50,000 votes.

NOOR: It was reported that on Sunday in Honduras, the head of the Election Tribunal said he was willing to review the electoral record. Talk about the significance of that and whether the willingness may translate into an actual review of the actual vote, which is what the opposition is calling for today.

TORRES: Well, I don’t think so, because the president of the Electoral Tribunalis David Matamoros Batson, who is a well-known member of the National Party. That is the one that won the elections. Matamoros Batson since the beginning has been always in favor of Juan Hernándes. He even is the president of the Honor Tribunal of the National Party, and he’s the president of the actual tribunal of the country. Matamoros Batson said a couple of hours ago, when Xiomara Castro went to the Electoral Tribunal to read and quote the things that we have found last week that were what we call fraud. He said that he thanked the resistance for that there have been no people injured or killed during the elections.

The resistance has more than 40 years of existing, and we have never injures anybody or killed anybody.

What happened was that yesterday we buried another campanero of the resistance that was killed by four men that people say they were from the military police that shot him four times and then yesterday, while we were presented the information for the tribunal. We were also with the dead body of our campanero that we were going to buried afterwards.

What Matamoros Batson said was almost that the resistance has been behaving very well because we haven’t killed anyone, because we were never the violent one in this. We have had more than 200 campaneros killed for more than 40 years of resistance. And we’re presenting the proof.

NOOR: Right. And, Gerardo, so I wanted to quote Leo Gabriel, who is an Australian journalist. He was a European election observer. He told the website Upside Down World, he says, “I can attest to countless inconsistencies in the electoral process.” And so you’re saying that despite the opposition opposing this and, you know, though I guess several or a few international observers have come out saying there was fraud, you think that this won’t make a difference as far as calling for an official recount in Honduras. If an official recount doesn’t happen, what will the next steps be for the opposition?

POTTER: We’re [incompr.] resistance. We’re going to be in the streets. We’re going to bring the struggle back to the streets, as we have been doing for the last four and a half years, because Juan Hernández is not the legitimate president of Honduras. The election was won by Xiomara Castro more than 5 percent. People decided that she had to be the president. And we’re not willing to let anybody stole this.

On the other hand, Libre Party has now almost half of the Congress, of the people in Congress. So we made alliance with other parties that are also against the National Party. We can make a strong position as a party in Congress while the resistance is keeping on the pressure against Hernández government. We expected that in 2013 a difference, and 2009, in this year, the will of the people of Honduras was going to be respected. But it wasn’t like that. We thought that it was going to be different. It wasn’t.

Gerardo Torres  is an independent journalist and a leading member of the National Front of Popular Resistance in Honduras.