A leader of a small island nation, Fidel Castro became a figure of global historic importance who led his people in revolution and defied the U.S. empire

A leader of a small island nation, Fidel Castro became a figure of global historic importance who led his people in revolution and defied the U.S. empire 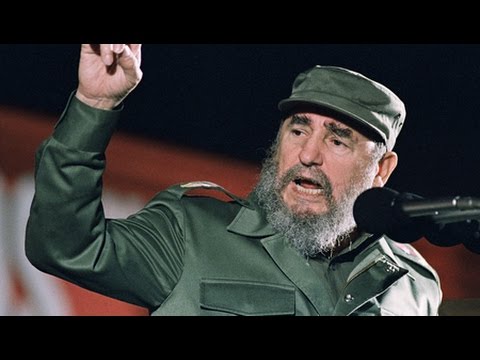 FIDEL CASTRO: Some imperialists asks themselves why the Cubans are helping the Angolans what our interests are. They are accustomed to thinking that a country does something only in search of oil, diamonds, copper, or other natural resources. No. Our interests are not materialistic and it is only logical that the imperialist can’t understand that.

GREGORY WILPERT, TRNN: Fidel Castro, the long-time revolutionary leader of Cuba, died at 90 on Friday, November 25th. Castro, Fidel as he was affectionately known by his supporters, was a world renowned leader who represented internationalism and solidary with revolutionary movements. Other though, especially the numerous US presidents he outlived and the anti-revolutionary Cuban community in exile despised him.

Fidel, first burst onto the world’s stage when in January 1959, he and his rebel forces overthrew the brutal US supported dictatorship of Fulgencio Batista after 3 year guerilla war. Together with his friend, the Argentinian Ernesto “Che” Guevara, Castro became an icon of revolutionary movements everywhere during the 1960’s.

So as to squash the revolutionary inspiration that Castro and the Cuban revolution represented so close to the US, US presidents from Eisenhower to George W. Bush launched all manner of efforts to overthrow Castro and by some counts, over 600 assassination attempts. Originally Castro did not declare his revolution to be Marxist or communist. But following a failed CIA organized invasion of Cuba in April 1961 known as the Bay of Pigs invasion, Castro reorganized his government and his movement and official declared it to be socialist.

The defeat of the invasion resonated across Latin America and the world and further raised Castro’s standing as the revolutionary who was able to defy US imperialism. In the years that followed, the US kept increasing its economic and political pressure on Cuba, instituting a blockade against all of its exports and imports. As a result, Castro turned toward the USSR and became one of the USSR’s main suppliers of sugar. He also gradually reoriented Cuba’s economy to follow the Soviety model, installing a planned economy and nationalizing all industries and agricultural production.

Throughout his time as leader of revolutionary Cuba, Castro dedicated many resources towards supporting revolutionary movements around the world. Particularly in the fight against colonialism. For example, in Africa he supported national liberation movements in Algeria, Congo, and later in Angola, sending fighters, doctors, and supplies.

In Latin America he supported guerilla movements that were opposed to US backed dictatorships in Argentina, Bolivia, Peru, and Colombia.

In his internationalist movement, Castro differed importantly though from Soviet policy which was far more accommodating to with the west and pushed its allied communist parties in these countries not to overthrow governments.

After the fall of the Soviet Union, Cuba was thrown into severe economic crisis because it could no longer count on beneficial trade relations with the Soviet Union. Castro had to find new allies and Cuba began it’s so called special period during which the economy shrank by as much as 40%.

Eventually Castro managed to reorient the economy though, away from sugar and towards biotechnology and tourism which by the late 1990’s became the main source of foreign income for Cuba.

With the 1998 election of Hugo Chavez in Venezuela, Castro acquired a vital new ally and close friend. As a result, Castro and Chavez proceeded to deepen economic and political ties between their two countries. Although Chavez saw in Castro, one of his main sources of inspiration, Chavez always spoke of the need to rethink and update socialism for the 21st century for which he had Castro’s full support.

One of Cuba and Venezuela’s most important cooperation projects was the area of medicine and oil whereby Cuba sent tens of thousands of Doctors to Venezuela in exchange for subsidized oil. Following a period of illness in 2006, Fidel declared in February 2008, that he would no longer lead the government of Cuba.

Fidel continued to write articles and occasionally appeared in public. In one of his last articles reflecting on President Obama’s reestablishment of diplomatic ties between Cuba and the US in late 2014, Fidel said Cuba “has no need for gifts from the empire”.

Castro’s passing was greeted with statements of appreciation from him from around the world. For example, President Jose Eduardo Del Santos of Angola said Fidel Castro was a figure “of transcendent historical importance who left his mark on his era by the role he played in his country and in the great transformation of humanity for the sake of freedom, social justice, and development”. President Evo Morales said Fidel “made so much history not only for Cuba but also for the planet, that is socialism. There will never again be a man or comrade like Fidel who devoted his life, his knowledge, and his struggle not only to the Cuban people but to all people of the world.

The Cuban exile community in Florida, especially the older generation though, celebrated Castro’s death. And President-elect Donald Trump said “Today the world marks the passing of a brutal dictator who oppressed his own people for nearly 6 decades”. No head of state, not even the most conservative ones, issued a statement as strongly worded as Trump’s.

No doubt Fidel Castro was controversial. Especially among the anti-authoritarian left which criticized the lack of a multiparty political system and the persistence of censorship in Cuba. Castro’s defenders though would point to the participatory and grassroots democracy that was being developed, particularly in recent years.

As for limits placed on freedom of speech, Castro and his defenders argued that this has to be seen in the context of the constant assault of the US against Cuba which among other things, spends millions of dollars every year on opposition groups and thus undermines and distorts Cuba’s civil society.

In the end though, Castro will probably be remember above all for his unwavering opposition to imperialism and support for international solidarity with the poor of the world.