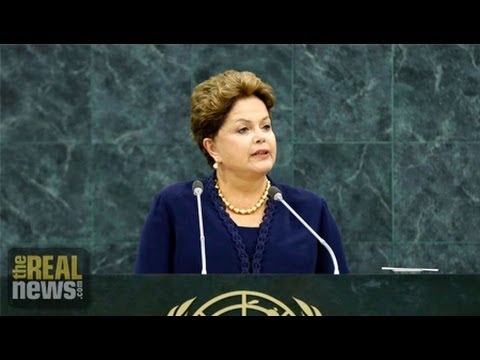 DAVID DOUGHERTY, TRNN PRODUCER: The United Nations General Assembly speeches were kicked off this year by opening speaker Brazilian President Dilma Rousseff. Her address was characterized by a scathing critique of the United States’ NSA spying program, which was recently revealed by documents leaked by former NSA contractor Edward Snowden to have been actively spying on Brazil. Her speech set a stronger than usual tone critical of the United States that would be heard in several other speeches by left-leaning Latin American heads of state throughout the week.

DILMA ROUSSEFF, BRAZILIAN PRESIDENT (SUBTITLED TRANSL.): Recent revelations concerning the activities of a global network of electronic espionage have caused indignation and repudiation in public opinion around the world. In Brazil, the situation was even more serious, as it emerged that we were targeted by this intrusion. Personal data of citizens was intercepted indiscriminately. Corporate information, often of high economic and even strategic value, was at the center of espionage activity. Also, Brazilian diplomatic missions, among them the Permanent Mission to the United Nations and Office of the President of the Republic itself, had their communications intercepted. Tampering in such a manner in the affairs of other countries is a breach of international law and is an affront to the principles that must guide the relations among them, especially among friendly nations.

DOUGHERTY: The previous week, President Rousseff had cancelled an upcoming high-profile visit to the White House scheduled for October in light of the revelations of U.S. spying on Brazil. Political analyst and founder of Venezuelanalysis Gregory Wilpert says the repercussions of the spying row will be costly for the United States and has already served to further alienate them from the region.

GREGORY WILPERT, FOUNDER, VENEZUELANALYSIS.COM: The diplomatic fallout of the spying revelations in Brazil has been tremendous for the United States. That is, Brazil is considered to be the most important partner for the United States, pretty much, well, besides Mexico, of course, and Colombia. But, I mean, in terms of–just because of the sheer size of Brazil, it”s really one of the most important partners. And that relationship has been severely damaged as a result of these spying revelations and Rousseff’s willingness to speak out against them.

And it’s a real dilemma, because Obama in a sense doesn’t know how to fix that problem. On the one hand, he’s being challenged from the right for his tendency–supposed tendency–because I don’t really think it exists–but his supposed tendency to apologize for U.S. actions around the world. So he’s going to be loathe to say anything that sounds remotely apologetic, because he’s already been tagged that way by the right wing in the United States. On the other hand, of course if he does anything to justify it, he’ll just alienate and antagonize Latin America even more. So he’s stuck, in a sense, in between a rock and a hard place with regard to Latin America.

DOUGHERTY: President Obama’s address to the General Assembly did not directly respond to President Rousseff’s comments, and Colombian President Juan Manuel Santos, traditionally an ally of the U.S., lamented the fact that Obama did not mention Latin America once during his entire speech. Argentinean President Cristina Fernández de Kirchner lashed out at international financial institutions and U.S. Wall Street lobbyists for taking advantage of Argentina’s 2001 debt crisis through vulture funds, citing a recent U.S. court decision on international debt that could have serious consequences for Argentina and other countries. Uruguayan President José Mujica criticized what he described as an overly bureaucratic United Nations lacking power and autonomy and driven by the interests of the larger and more powerful member nations.

Gregory Wilpert attributes the structuring of the UN and the Security Council as factors in its apparent decline in relevance in Latin America, leading to the rise of regional blocs between Latin American countries.

WILPERT: Unfortunately, it does look like the United Nations has become increasingly less relevant. It’s being sidelined ever more by the Security Council. And this is intentional, really. I think it was Vijay Prashad, actually, who pointed out that a lot of the issues that used to be dealt with in the General Assembly as important issues have now been relegated towards the Security Council, and that this was specifically a maneuver by the United States in order to avoid the dominance of the Third World, which dominates in the General Assembly, which is a more–in a sense, more democratic body than the Security Council, which is dominated essentially by the U.S. and Western Europe, although of course with heavy, strong influence from China and Russia.

So, as a result, the UN General Assembly, in any case, and also the Security Council in the sense that it doesn’t deal with Latin America, neither one, in other words the United Nations as a whole, has been particularly important for Latin America, and instead the regional integration efforts are certainly more important and more relevant. But that’s of course a separate issue, in a sense, because, you know, the UN is meant to deal with the entire world, and the regional integration bodies don’t really play a role on the world stage so much, at least not yet.

DOUGHERTY: Ecuadoran President Rafael Correa and Venezuelan President Nicolás Maduro did not attend the United Nations General Assembly. The previous week, President Maduro accused the United States of having denied his presidential plane passage through U.S. airspace over Puerto Rico, and that several visas for his diplomatic staff had been denied ahead of the UN General Assembly in New York, where he said he would not feel safe visiting given the current diplomatic climate. Bolivian President Evo Morales had called on ALBA bloc member countries to boycott the General Assembly, but he later ended up addressing the United Nations. In light of recent events, President Morales asserted calls for the UN General Assembly to be moved to a location outside of the United States and suggested that the government of President Obama should be brought before an international tribunal for crimes against humanity.

EVO MORALES, BOLIVIAN PRESIDENT (SUBTITLED TRANSL.): If we are here to seriously debate issues of life and humanity, I want to suggest something that perhaps some of us can agree on, of seriously debating and constituting a “tribunal of the people” with international bodies and the large defenders of human rights, to begin a lawsuit against the Obama government. The reasons for the suit are for crimes against humanity… to be judged for acts of international terrorism, financing of terrorist groups, and for arming opposition groups.

DOUGHERTY: Other topics discussed by Latin American leaders at this year’s General Assembly included how to best respond to the crisis in Syria, debates over the UN Millennium Development Goals, and strategies for combating poverty and inequality in the region.

This is David Dougherty with The Real News Network.