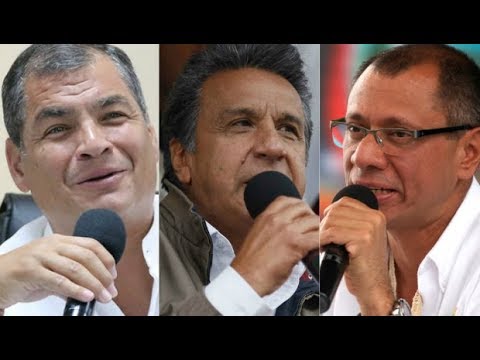 Sharmini Peries: It’s The Real News Network. I’m Sharmini Peries coming to you from Baltimore. Earlier this month, Ecuador’s recently elected president, Lenín Moreno, decided to strip his vice president, Jorge Glas, who belongs to the same political party, of all his duties, except for the vice presidency itself. The move was the combination of an intensifying feud between former president Rafael Correa and president Moreno. If you recall, Correa campaigned heavily to have Moreno elected as his successor. But now, a political rift has developed between the two. Here’s a clip of what the past president, President Correa, had to say this weekend about all of this controversy regarding the vice president, Jorge Glas.

Rafael Correa: They should show not what the corrupt ones are saying of Petroecuador and Odebrecht because this Mr. Santos, of Odebrecht, and Correa, in this case, they are corrupt, or slinging mud with a fan. They should show, with evidence, whether we have given away even twenty cents. If not, then we need to defend our vice president with all our soul. They want to smash our vice president, an honest man, an innocent man. I don’t care about the politics. What I care about are my principals. And I’ll defend a good man and an innocent man.

Sharmini Peries: Joining us to make sense of this falling out between the current and former president of Ecuador is Gregory Wilpert. Gregory is a real news correspondent normally based in Quito, Ecuador, but joins us today from Caracas, Venezuela. Thanks for joining us, Greg.

Sharmini Peries: Greg, so give us a brief summary of what is this ongoing conflict between Moreno and Correa that has become a significant political issue in Ecuador.

From the beginning there’d been a lot of rumors and accusations, especially from the opposition, and both Correa and Moreno had actually ignored those accusations. But, recently for various reasons, one of them being that a newspaper published a transcript and a recording of where Odebrecht, the big Brazilian company that has been accused of corrupting governments throughout Latin America, where they basically implicated Jorge Glas, the vice president, of being involved in Ecuador and corruption. Of having received bribes basically in order to move certain infrastructure projects forward. And so that kind of was the detonator, I think, for … or one of them, let’s say … for trying to remove Jorge Glas from office. And so, back … and then in the mean time, Glas, himself, fired back saying this is all a political campaign to discredit him and to discredit the legacy of president Correa, because he’s an old friend of Correa’s who has been very solidly supportive of Correa, and Correa of him, and that it’s an effort to move the government in the right wing, or rightward direction.

And so, he wrote a letter … basically a public, open letter back on August 2nd criticizing Moreno, and then on August 3rd, Moreno removed him from all the positions, the various committees, and official duties that Glas had, which means that he’s, right now, only vice president with absolutely no duties whatsoever, not even a security detail. And so that’s basically what it’s amounted to at the moment. And it’s kind of a strange overlap of corruption issues and what the political direction of the Moreno government.

Sharmini Peries: Right. And from Moreno’s point of view, given the scandalous political crisis that Brazil is in and Petrobras’ involvement in Odebrecht and all of the turmoil there, you can see he is probably hyper-alert about protecting his administration from these kinds of allegations. How serious would you say these charges against Vice President Glas is and is there any evidence?

Greg Wilpert: Well, as we saw in the clip earlier … I mean, one of the things that … one of the points that Correa is making is that all of the evidence against Glas is really coming from the people who are, themselves, completely concretely involved in corruption, and therefore cannot be trusted or have been accused … and this is basically the company Odebrecht itself. And Glas is saying that, well, they’re holding … that Odebrecht is holding Glas responsible for having kicked Odebrecht out of Ecuador. That that was his decision and it was because of their involvement in corruption and now they’re seeking revenge on him by trying to get him involved.

And so far, other than the supposed recording where one Odebrecht official mentions Glas as receiving bribes, it’s nothing concrete. It could have been staged. We don’t know. There’s nothing concrete really against Glas as far as I can tell. And then the other accusation comes from the former director of the oil company where it’s a similar situation where he says that Glas knew about the corruption that was in the oil company, but he also doesn’t offer any documentation. There’s no bank accounts, nothing showing that he received any payments of any kind, so it’s still really on the level of accusations and hearsay than anything really documented. And so, I would say one has to believe that the person is innocent until proven guilty.

Sharmini Peries: Right. And, Greg, what was Glas’s role in the previous administration?

Greg Wilpert: Well, he took on many different tasks. First of all, he was a minister for the oil industry, so that was very important. He was also in charge of various infrastructure projects, construction projects, and including one of the major dams in Ecuador. And so he had a very crucial role in that sense, and of course, he should’ve perhaps. I mean, that’s the most one could say at this point, pretty much, for certain. I mean, there was corruption. Whether he benefited from it, we don’t know. But, he should’ve known about it because he was at the head of these major companies and these major ministries. So that’s the main thing that seems to be definite is that he shouldn’t have been ignorant of these kinds of things going on right under his eyes or right under his responsibility. So, yeah. That’s really the main thing that someone can accuse him of, I think.

Sharmini Peries: Right. And what seems to be developing here is really a political difference and also these corruption charges. Give us a sense of what the political rifts that are developing between Moreno and Correa and his legacy and what Moreno might be trying to undo about Correa’s legacy.

Greg Wilpert: Yeah, I think that’s really key to understand the political context in which this is happening because originally Moreno was campaigning on continuing the policies of the Correa government as being a progressive, social-democratic essentially type of government and he promised to also to even expand some of the social programs. And, so in that sense, it’s kind of surprising that there’s a shift, but at the same time that this corruption scandal was evolving, Moreno was starting to distance himself from Correa and from his legacy and one of the main issues really became the sole issue about how indebted is Ecuador.

And one of the things that Moreno kept saying is that … Actually, Correa was really irresponsible. He started attacking him pretty strongly. Saying that the country is over 40% in debt and that’s illegal according to Ecuadoran law because there’s a debt limit on 40% of GDP that … And Correa shot back, of course. As a matter of fact in this Facebook video, the more extended version, he talks about how this is really ridiculous and he provides a lot of statistics saying that actually Ecuador is only 30% of GDP in debt, not 40% and that this is just a way of moving the country towards the right. And there’s some evidence for that, that that’s what Moreno’s trying to do because the appointed several ministers from the opposition to be in his cabinet and this argument about extra-heavy debt seems to be an argument to cut back on social spending really.

Sharmini Peries: Right. And, Moreno was Correa’s vice president, so he knows the role of the vice president rather well. So removing him from all these duties is rather significant. What will happen next? Because here you have a cabinet who’s shifting right, and Glas is obviously even, if he’s not involved in the corruption charges, would be more inclined to carry out or protect the legacy of Correa here.

Greg Wilpert: Yeah, it’s a very difficult situation in some sense, especially for the party on the Alianza PAIS, which is the one that Correa created and that Moreno is now nominally the head of, and the party has been trying to mediate between the two … to the current president and the former president … trying to maintain it, but it could head towards a split. That is if there’s a real rupture, it could mean a left-right division, really, within the Alianza PAIS party, which is the largest party in Ecuador at the moment, and that would certainly be a weakening for Moreno. On the other hand, Moreno is enjoying tremendous popularity at the moment. Polls from the middle of July said he had 70% popularity … Actually, I just saw another poll that said in early August, it had reached 78%. So he’s being … So that gives him a lot of clout, really. But, of course, it’s not gonna be worth too much if he doesn’t have a political party to back him.

So the big question is whether the party will split and whether Moreno will continue moving towards the right, which are some of the indicators. Well, another indicator of this actually is … For example, he issued a very harsh criticism actually of Venezuela yesterday, which really went against Ecuador’s foreign policy up until now, which was to solidly support the government of president Maduro. And, so in that sense, he seems to be aligning himself more and more with the rightward trend in the continent if you think about the rightward shift in Argentina and in Brazil, particularly, and then lining up also with Colombia and Mexico. And, so that would be a pretty big shift if that direction continues.

October 11, 2019
Sign Up for Our Newsletter
Help Us Make Real News!