Greg Wilpert: Chavez remains popular but people frustrated with some around him

Greg Wilpert: Chavez remains popular but people frustrated with some around him 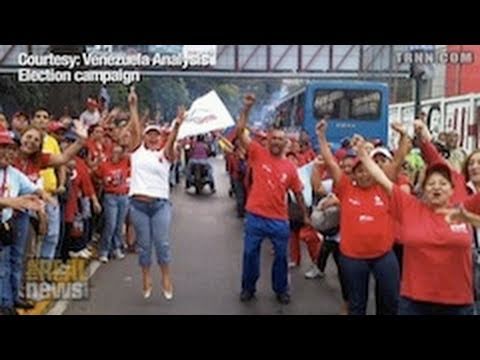 GREGORY WILPERT, AUTHOR, EDITOR OF VENEZUELANALYSIS: Thanks for having me.

WILPERT: Well, right now the National Assembly is entirely controlled by Chávez supporters. That’s because the last elections, 2005, the opposition boycotted those elections, arguing that there were not going to be fair elections, even though the Carter Center and the Organization of American States urged the opposition to participate and, at the end, ratified that they were free and fair elections.

JAY: So right now, in terms of the polling, what’s expected in this election?

WILPERT: Well, it’s very difficult to say, because polls in Venezuela tend to be divided, depending on the political affiliation of the pollsters. And it’s very difficult to find neutral polls. So opposition polls tend to say that the opposition is going to win; pro-Chávez polls tend to say that Chávez is going to win. My guess is that it’s going to be a very close call, it’s going to be a very close election, because there’s—on the one hand, Chávez is still a very popular individual, but he’s not on the ballot, and there’s a lot of problems in Venezuela right now with the recent recession that Venezuela’s coming out of and with the discovery of a corruption scandal. So there’s some dissatisfaction. And so my guess is that a lot of people who would normally vote for Chávez, instead of voting for the opposition, because nobody—still the opposition is extremely unpopular, instead of voting for Chávez, they’re going to abstain. And so that could make it a very close call.

JAY: So the people that might abstain are people that voted for Chávez in the past, and their main critique being what? That things have not happened quickly enough? There hasn’t been enough changes? I mean, one of the critiques will be is that Chávez controlled the National Assembly and the national government, so there wasn’t opposition to passing any legislation. So people are saying, well, then, why hasn’t there been more successes?

WILPERT: Yes, that’s certainly the case. I mean, one thing to consider, of course, is that Chávez has been in office for 11 years now, and that is a very long time for somebody to maintain the high levels of popularity that Chávez has maintained. And so there’s a certain amount of fatigue that has set in with the people, especially—not necessarily with Chávez, but with the people around Chávez, and with the recurrence of certain problems, especially this corruption scandal that I mentioned earlier. And there was also another problem was the electricity rationing. Venezuela had experienced a drought, a very severe drought last year, and had to ration electricity because all of its electricity comes from one—practically all of it comes from one hydroelectric dam. And so those are a lot of problems to have accumulated, and particularly in an election year.

JAY: Well, one of the complaints the opposition’s made is that that should have been foreseen, the electricity problem. How legitimate a critique was that?

WILPERT: It’s partly legitimate, partly not, because it’s impossible to really foresee a drought. And we’re talking about a drought in which it didn’t rain for an entire rainy season. Now, that’s very unusual, which is probably traceable, actually, to global warming. So in that sense it might have been foreseeable, but it was not something that has ever happened in Venezuela before, as far as I know. And so—but on the other hand, there’s certainly a lack—there was a lack of investment in the electrical sector, and so more could have been done to at least partially avoid this problem.

JAY: And the real litmus test for a lot of people, I think, from the outside, at any rate (of course, nobody from the outside’s going to be voting), is life in the barrios. And to what extent has that really improved? And has it improved more quickly? Because what you read, at least in the Western press, is that in some of Chávez’s base of support there’s some question of abstention, there’s some pulling back. How true is what we’re reading in the newspapers here?

WILPERT: There’s definitely some dissatisfaction. But on the other hand, there have been a lot of improvements for people living in the barrios. I mean, right now, Venezuela—actually, when Chávez got elected, Venezuela was one of the most unequal countries, according to economic analysis, and one of the most unequal countries of Latin America. Now it is the most egalitarian country in Latin America—that is, excepting Cuba, perhaps.

JAY: Measure—how are you measuring that?

WILPERT: Measured by the GINI coefficient, which measures inequality. Unemployment is lower than ever, poverty is lower than average, even though Venezuela’s going through a recession. And the reason that it’s managed to maintain poverty at a very low level and unemployment at a relatively low level despite a recession is that social programs are still in effect, and social programs have made a big difference in people’s lives, whether they’re educational programs, community health care, subsidies for single mothers, things like that. They’ve really made a big difference in people’s lives. But that’s something that was initiated already four years ago. So people have short memories, and there’s other problems that are accumulating, such as electricity and the corruption.

JAY: It was only four years ago the opposition seemed to be in chaos. One could barely imagine them mounting an election campaign. Now they’re back, vying for perhaps winning control of the National Assembly. What happened in the last four years that the opposition was able to reorganize to such an extent?

WILPERT: It’s the problems that are on the Chavista side that are giving the opposition an opportunity. There’s nothing really new that the opposition has done. I mean, they’ve created a new umbrella organization, but they’re still very internally divided and they still don’t have a unified program and they still don’t have a unified leadership. So it’s really more the opportunity that they’re being presented with than anything that they’ve done.

JAY: One of the things that seemed to spark the opposition again was the closing down of some of what was called opposition media. What is your take on all of that?

WILPERT: The whole issue of freedom of the press is really something that has caught on in the international media and international observers of Venezuela. But within Venezuela itself, I don’t think that really is a story that has really caught on within Venezuela, because everybody knows that you pick up or look at the headlines of any newspaper stands and you see incredible diversity of opinions. You try and flip the TV dial on and you can also hear all kinds of voices from the opposition or from Chávez supporters. So there’s still an incredible diversity of opinions. And so that’s why this whole accusation of Chávez clamping down on freedom of speech doesn’t really ring true for most Venezuelans, I think.

JAY: But there was a serious protest movement, was there not, with the closing down of a couple of the television stations. They said they were being closed on technicalities. But—I mean, I don’t know the truth of it, but I know there was quite a movement within the opposition ranks. It seemed to re-energize the opposition, which had been quite deflated.

WILPERT: Well, actually, there was one television station that did not have its license renewed, mainly because its license expired and it was a key participant in the 2002 coup attempt. And, yes, there was a big movement that the opposition managed to mobilize, particularly around students and the youth, to oppose that. But I think to some extent Chávez supporters have countered that by organizing their own youth movement and their own student supporters to counter that. And also, that movement became a bit discredited, I think, once it came out how much the US government has been funding opposition groups, particularly student groups, through the National Endowment for Democracy and so on in Venezuela. They’ve really lost a lot of relevance, I think, in the meantime.

JAY: So if in fact the abstentions are enough to shift the balance of power in the National Assembly to the opposition forces, what’s the significance of that?

WILPERT: Well, what most people don’t realize is that the National Assembly is a very important body in Venezuela. Actually, it’s more powerful than the US Congress, if you consider that it appoints an independent attorney general, it appoints electoral council, which is independent, and it appoints the Supreme Court, which is independent. So it has a lot more power than the US Congress, which doesn’t get to appoint all of these positions. Plus a lot of laws need to be passed with a two-thirds majority, laws that are particularly important that are derived from the Constitution. So if Chávez loses his two-thirds majority, that means that the Bolivarian Revolution will definitely receive some brakes because it will not be able to pass all of the laws that it still plans on passing. So that’s a serious problem. If it were to lose its absolute majority, which I think is actually very unlikely—but if it loses its absolute majority, that could cause serious problems.